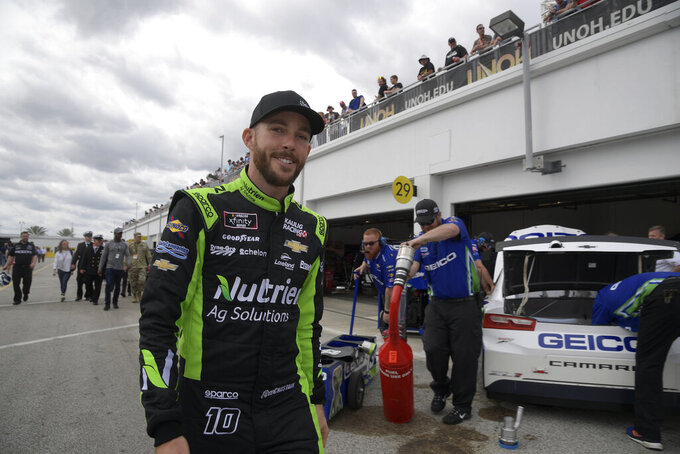 FILE - In this Feb. 16, 2019, file photo, NASCAR driver Ross Chastain (10) walks through the garage area during a practice session for the NASCAR Daytona 500 auto race at Daytona International Speedway in Daytona Beach, Fla. Chastain opened the season with 36 consecutive starts across the Cup, XFinity and trucks series, a streak that’s believed to be a record in stock car racing. Chastain has logged a staggering 7,501 laps since February, a streak that only came to an end when he sat out last week’s Cup event in Michigan.(AP Photo/Phelan M. Ebenhack, File)

Chastain opened the season with 36 consecutive starts across the Cup, Xfinity and Truck series and has logged a staggering 7,501 laps since February, a streak that only came to an end when he sat out last week's Cup event in Michigan.

It has been a taxing season for the 26-year-old Chastain, who has sponsorship duties to handle for all three of his rides between races. He is not about to say no to anyone as he tries to establish himself in the sport.

"Sunday night, I'm tired. There's no way around it," Chastain said. "You prepare. You hydrate. You work out. You eat right. You're a race car driver, so you get through it."

Chastain, who this month switched from competing for Xfinity points to points in trucks, will run this weekend at Iowa Speedway. Part of the reason he is reluctant to turn down any spots behind a wheel is because he spent years fighting to run in competitive rides.

Chastain broke through as an 18-year-old in The Trucks Series in 2011. He ran a full schedule there in 2012, but finished just 17th. Chastain moved over to the Xfinity series in 2015, and even though he finally took a checkered flag last year, in Las Vegas, Chastain has never finished better than 10th in that series.

Chastain is also in his second season in Cup, where he has one top-10 finish (the Daytona 500 in his native Florida). Chastain has outperformed his pole position in 10 of the 12 races he finished.

The plan this season was for Chastain to compete for an Xfinity title once again. But a rough start there and a hot start in trucks helped lead to a switch in the points pursuit.

"There were a lot of contributing factors. I don't need to get into all of it, but our hand got forced a little bit," Chastain said. "But it was just the right move, honestly."

By switching his championship affiliation, Chastain had to give up all of the points — and his win at Kansas — he had earned in his truck up to that point.

But if Chastain keeps running like he has so far, it likely won't matter.

Chastain has finished in the top 10 in all nine truck starts, even though he hasn't finished higher than sixth in qualifying. He would be second in the standings had he chosen to compete for truck points at the start of the season, and a win at Iowa would almost guarantee that Chastain would make the playoff field.

"I can sleep at night with my decision," Chastain said. "I'm good with it. I'm at peace with it.

Sleep would be good. This week alone, Chastain flew to Cleveland to catch an Indians game with sponsors Tuesday. He then took a red eye flight to Las Vegas on Wednesday and another overnight trip to Iowa.

Chastain had not slept when he met with reporters Friday afternoon. But no complaints.

"I'm a yes man," Chastain said. "When people give me an opportunity, I tend to jump on it. Because in years' past, I've been asking for anything just to come race."