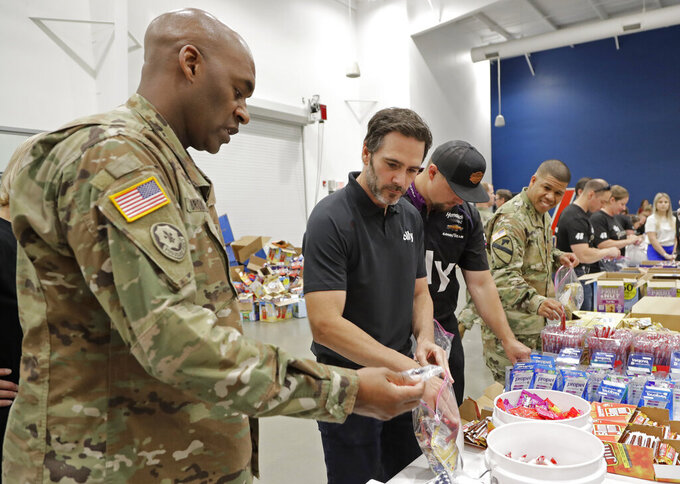 CHARLOTTE, N.C. (AP) — Jimmie Johnson views himself as a patient person. But mired in a brutal winless streak, the seven-time NASCAR champion is putting all options on the table when his contract is up next year.

"I'll have to evaluate what I'll want to do after that," he said.

Johnson is growing more and more impatient with each passing week as his Hendrick Motorsports No. 48 race team keeps struggling on the track.

"Over my career, I've been able to be patient and let things work themselves out," Johnson said this week. "There are two factors that are leading to my impatience now — one is I haven't won in a couple years; two is that I don't know what I'm going to be doing in a couple years."

He enters this weekend's NASCAR All-Star race at Charlotte Motor Speedway a disappointing 16th in the points standings with only one top-five finish. Last season, he had just two top-five finishes in 36 starts.

Johnson fully understands that if he wants to capture an eighth Cup Series championship he needs to find a way to win a race soon — or at least get into the mix.

As Johnson scuffles along,, teammates Chase Elliott and Alex Bowman are off to solid starts with seven top-five finishes and a win between them. Bowman has back-to-back runner-up finishes headed into this weekend.

With the pressure to win mounting, Johnson's team is using the non-points All-Star race as a chance to experiment with different setups on the car.

"We have great flexibility at Hendrick to change cars and build cars in different ways," Johnson said. "At times we've found ourselves very close together. I think there are some areas where our cars are closer together than they've ever been, especially from a body standpoint."

But the No. 48 team hasn't hit on the right package for his Chevrolet Camaro, even though all the team's drivers have access to all the same components.

"We're building our mouse trap and there are options along every part of building that mouse trap that you can take different options and different things," Johnson said. "I believe some of those options, we just haven't chosen the right ones. That's led to where we are right now."

Johnson spoke to the media this week at the Hendrick Motorsports team center for an unveiling of his new military-themed camouflage paint scheme for the Coca-Cola 600 on May 26. Over his shoulder, on the wall behind, was a list of some of his most memorable wins.

They include four All-Star race wins and four Coca-Cola 600 victories.

So there's a chance a positive move could come at a place where he's familiar with winning.

"Our teammates have hit their stride and are looking really good, so we need to head that way," Johnson said.