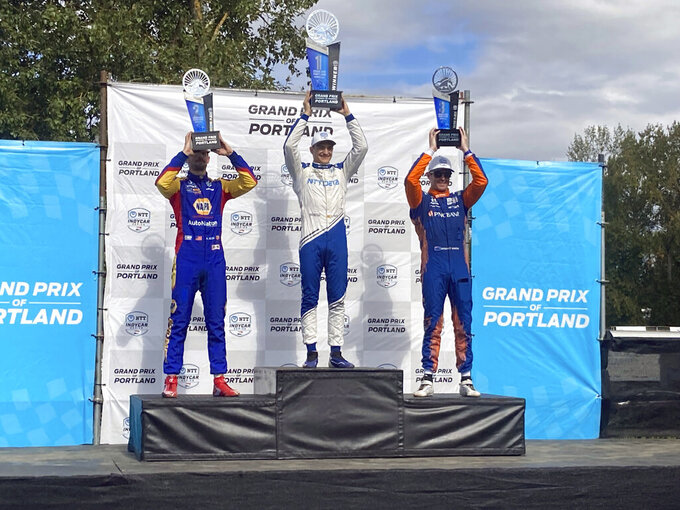 PORTLAND, Ore. (AP) — When Alex Palou and teammate Scott Dixon missed the first turn on the first lap at Portland International Raceway, it put Pato O'Ward in position to take firm hold of the IndyCar championship.

But the two Chip Ganassi Racing drivers didn't panic, even when IndyCar sent Palou and Dixon almost to the back of the entire field at a race neither could afford to lose to O'Ward.

Instead, they strategized on how to salvage Sunday, a feat accomplished when Palou recovered for his third victory of the season and Dixon finished third. The victory put Palou back on top of the points standings with two races remaining to crown the IndyCar champion.

“I think that many people after the first lap thought that Pato was going to win and that we were going to lose 40 points,” Palou said. “And it was the opposite. That’s why IndyCar is IndyCar — I think that makes the racing super exciting and the championship super exciting until the end.”

Palou won the first pole of his career to set the tone for what he hoped would be a weekend rebound after back-to-back poor races moved O'Ward past the Spaniard and into the points lead. The second-year IndyCar driver had an engine failure at Indianapolis and then crashed at Gateway to go from 42 points up in the title race to trailing O'Ward by 10 headed into Portland.

The pole earned him one point and cut Palou's deficit to nine points when the green flag flew, but mayhem ensued before the very first turn on the permanent road course. Palou and Dixon hurtled toward the first turn and Felix Rosenqvist — the driver Palou replaced this year at Ganassi — appeared to clip Dixon.

It caused Dixon to lock his brakes as he and Palou rode side-by-side. Neither Ganassi car was going to make the turn and both followed Rosenqvist through a runoff to avoid crashing.

It took 10 laps under caution for IndyCar to figure out how to reorder the field, and Palou and Dixon were dropped to 17th and 18th for the restart on Lap 11 — the first lap under green. In all the ducking and weaving to avoid a multi-crash accident, O'Ward had cycled from seventh on the start to the lead before he even made it through the first turn, and yet Palou felt the race was still in his control.

As IndyCar took 10 laps to line the cars back up, Palou realized he'd likely have enough fuel to make the 110 laps on only two pit stops.

“I think when they were taking a long time to penalize us, I was counting laps and I was like ‘OK, this is a good thing. I know we can make the fuel mileage to make it in two only stops,’” Palou said. “Even if we were on the same strategy as everybody, maybe we were not able to win, but we were able to be in the top five, top six. You never know.”

Although O'Ward led 28 laps, he couldn't put a complete race together and the Ganassi drivers slowly picked their way back into contention. Palou had returned to the lead and was out front for a pair of restarts in the final 20 laps, holding off Alexander Rossi both times to preserve the victory.

The 24-year-old moved back atop the standings and takes a 25-point lead over O'Ward into next week's road course race at Laguna Seca in California. The season then concludes Sept. 26 on the streets of Long Beach, marking three tracks where Palou has never raced to close the season and his first championship.

“Laguna Seca is going to be good for us. We tested there. I feel strong there,” Palou said. “Long Beach, that’s going to be interesting and exciting, but nothing I can do about it. Never been there, all my competitors been there and won races there, so it’s a bit scary.”

Rossi finished a season-best second for his first podium of the season and was followed by Dixon, who despite finishing third lost ground in his bid for his seventh IndyCar title. The reigning champion went from 43 points down to O'Ward to 49 points behind Palou.

“It’s definitely been a trying season for us, but ultimately if it comes down to we need to help Alex, that’s fine, too,” Dixon said. “I think for us it’s about keeping the championship at home and at the team. Unless you’re out, you’re not out. It’s all possible."

James Hinchcliffe, Romain Grosjean and Helio Castroneves were all involved in the opening lap accident and all three went to the garage for the repairs.

It marked the third consecutive race at Portland in which Hinchcliffe, who is likely out at Andretti Autosport at the end of the season, was crashed in the first turn of the first lap.

“It's comical at this point, it's so sad,” Hinchcliffe said.

Andretti Autosport is expected to make a pair of driver changes at the end of this season, with an announcement that Ryan Hunter-Reay is out coming as early as this week. Grosjean is expected to replace Hunter-Reay, and Hunter-Reay has been mentioned as a candidate at Ed Carpenter Racing.

The race for the $1.3 million IndyCar scholarship awarded to the Indy Lights champion remained tight in Portland, where leaders David Malukus and Kyle Kirkwood split the weekend races.

Malukus beat Kirkwood on Saturday, and Kirkwood beat Malukus on Sunday. Both drivers have seven wins each this season and Malukus holds a five-point lead in the standings headed into next weekend's doubleheader at Laguna Seca. There are four races remaining in the Lights season and the champion takes the prize money for a shot at an IndyCar Series seat.

IndyCar races next Sunday at Laguna Seca Raceway, where Colton Herta won in what was the 2019 season finale. The race was canceled last season because of the pandemic and returns as the penultimate event in the IndyCar championship.