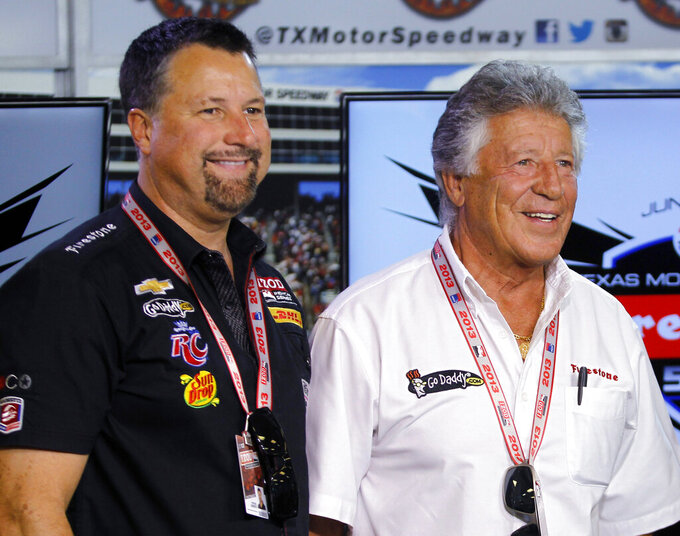 ST. PETERSBURG, Fla. (AP) — Michael Andretti said Friday that his father revealed his Formula One aspirations last week to show the FIA there is strong public support for an expansion team — and he would need a decision from motorsports' governing body in the next month to be properly prepared for a 2024 debut.

Mario Andretti a week ago surprisingly took to Twitter to outline his son's plans, writing that Andretti Global had applied to the FIA for a new team in time for the 2024 season and was awaiting a decision. The move drew immediate attention not just around F1 but in IndyCar.

Amid preparations for IndyCar's opener Sunday in St. Petersburg, Michael Andretti said he had expected FIA's decision in early January. He said he and his father, the 1978 F1 champion, have grown restless as the application sits and hoped publicizing his plans would show the FIA the value the Andretti name could bring to the series.

“I think we check every box," Michael Andretti said. "We’re a long way down the road with a manufacturer. There’s nothing that should us hold back from being accepted. But our thing is, the clock’s running, so we need to get this going ASAP. Because two years sounds like a long time. But it’s not a long time. We’ve got a lot to do, a lot to build. We’ve talked to a lot of people. They’re just sitting on the sideline waiting to see this thing go, and we can build a real credible team. I’m excited if we can get the approval, we can come in looking good.”

Andretti bristled at Mercedes boss Toto Wolff's assertation that adding two more cars to the F1 grid would dilute the competition and the revenue to teams.

“Toto’s going out there, ‘What do you bring to the table?’ I think we bring a lot, and I think we’ll bring a lot more than what we’ll be diluting,” Andretti said.

F1 will have two races in the United States this season and is expected to add a third stop — in Las Vegas — to future calendars. F1 has exploded in popularity in the U.S. since American company Liberty Media bought F1 and the “Drive to Survive” Netflix docuseries gave viewers a behind-the-scenes window into the globetrotting series.

F1 does not have an American driver, something Michael Andretti plans to correct by bringing 21-year-old Californian Colton Herta with him should his plans move forward. Andretti attempted to buy the Sauber team last year and would have put Herta in one of the cars had the deal not collapsed, prompting him to file the application with FIA in December.

“That’s our case. The American market is still untapped, but obviously with the Netflix series, that’s really brought a lot of popularity ... I believe we can bring more longevity to the Netflix series to have a real American team with an American driver," Andretti said. “I believe with our brand, I think it could keep a lot of interest going for a lot more years.”

Andretti would have to pay a $200 million entry fee that would be split among the current 10 F1 teams if the FIA approves his application. He said he does not personally have the funds but has enthusiastic partners backing Andretti Global. Andretti would not reveal the investors.

“They want to do this and do it right and be competitive. They’re not in it to just be in it,” he said. “They’re in sports already and they think Formula One is very attractive at the moment... the popularity in the U.S. growing. The timing is perfect.”

However, Andretti said he'd prefer to purchase a current team than to start one from scratch and said he has reached out to Haas owner Gene Haas “millions of times” to try to purchase that team. Although Haas is American and his NASCAR shop is in North Carolina, he's not had an American driver since joining F1 in 2016.

Following Russia's invasion of Ukraine, Haas on Friday removed the logos of its Russian sponsor from its cars during F1's preseason test in Spain while team principal Guenther Steiner said he was not sure if Russian driver Nikita Mazepin will be able to compete this season.

Steiner also said there had been no recent contact from either Michael or Mario Andretti.

Michael Andretti said if Haas would sell to him, Andretti Global could be on the F1 grid next season.

“He doesn’t want to sell. If he wants to sell, tell him to call me. That makes it a lot easier for us,” Andretti said. "The last conversation I had with him was probably around October or November. He told me he didn’t care if he’s running in the back, says it works for him anyway.

As for Herta, an IndyCar championship contender who on Sunday will attempt to defend last year's St. Pete victory, Andretti said he isn't concerned his young star will lose focus amidst speculation about his future. Herta said this week he would eagerly move to Europe to transition to F1.

“It’s good for his head to know that he’s got that, that he’s wanted in that way,” Andretti said.