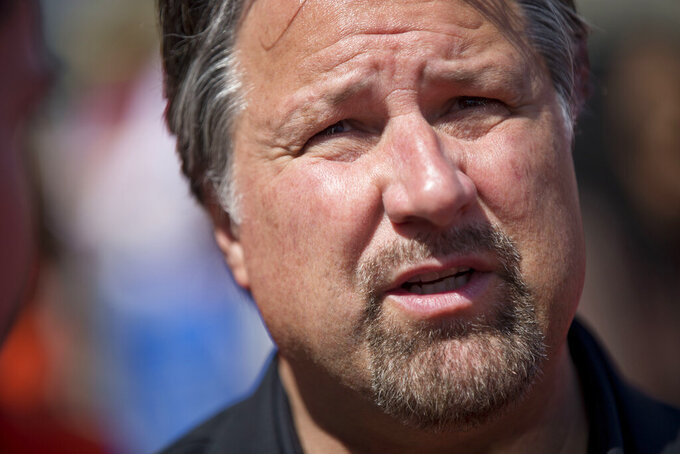 FILE - In this April 2, 2015, file photo, car owner Michael Andretti speaks to a reporter during a news conference in Philadelphia. Andretti Autosport and Chip Ganassi Racing are the first two American teams to commit to a new electric SUV off-road racing series scheduled to begin in 2021. The Extreme E series has five events planned in what the league is calling “some of the most remarkable, remote and severely damaged locations on the planet.” “The current COVID-19 crisis is bringing attention to a changing world, and our traditional mindsets have to adapt with that," said team owner Michael Andretti. (AP Photo/Matt Rourke, File)

Andretti Autosport and Chip Ganassi Racing are the first two American teams to commit to a new electric SUV off-road racing series scheduled to begin in 2021.

The Extreme E series has five events planned in what the league is calling “some of the most remarkable, remote and severely damaged locations on the planet.” The schedule calls for 6-miles courses in Kangerlussuaq in Greenland, the Amazon rainforest in Brazil, Al-Ula in Saudi Arabia, the Nepalese Himalayas and Lac Rose near Dakar, Senegal.

Teams are expected to receive an Odyssey 21 E-SUV in late October and group testing of the vehicles is to begin shortly after. Team rosters will be required to include both a male and female driver who race over two days of head-to-head knockout competition.

The two-lap races will include a driver and co-driver, with each required to complete one lap behind the wheel and a changeover incorporated into the race format.

“The current COVID-19 crisis is bringing attention to a changing world, and our traditional mindsets have to adapt with that," team owner Michael Andretti said. "We feel that announcing now can help bring hope for the future of motorsport and a new focus to the sustainability message.

"I believe the entire motorsport industry is going to emerge from this time stronger than ever, and I look forward to seeing our team join Extreme E to do our part in leaving an impactful legacy in each race location.”

Andretti has fielded entries in Formula E since its inaugural season, and Extreme E is an offshoot of that first electric series.

Ganassi, in its 30th season of professional racing, is making its debut in electric motorsports.

“As a leader, Chip Ganassi has never been afraid to innovate and adapt," said Alejandro Agag, founder of both Formula E and Extreme E. “That is entirely in keeping with the ethos behind our ambitious and groundbreaking new series, which he was very quick to embrace.”

Agag noted Andretti Autosport has been passionate from the launch of electric racing in promoting sustainable practices and technologies through racing.

“Extreme E is an ambitious new project born out of a concern for the future of our planet, and now more than ever, as motorsport adapts its behaviors and values to stay relevant in these changing times, that concern is critical for us all to consider," Agag said. “Andretti Autosport has been fine-tuning its expertise in electric racing as a founding Formula E outfit, and off-road as multiple rallycross title-winners. These experiences will be invaluable in making the jump into Extreme E.”

Ganassi said his organization is venturing into Extreme E because innovation indicates a new direction for motorsports in the future.

“I’ve always been passionate about pushing the boundaries of what is possible, and Extreme E checks that box for us in a big way,” Ganassi said. "It represents an opportunity in motor racing to use the latest technologies to attract a new, younger audience to this great sport.

"Everything about Extreme E is cool, from the car to the race format and the in-built technology. We’re thrilled to join the championship and to play a part in developing the future of our sport.”

Innovations such as remote broadcast facilities and comprehensive cross-platform coverage for spectators watching at home, rather than stage-side, are aimed at minimizing the carbon footprint at events. Extreme E will also use a “floating garage” called the RMS St. Helena.

The former Royal Mail cargo-passenger vessel is being refitted to lower its emissions and will be used to transport the series' freight and infrastructure, including vehicles, to the nearest port. That element is aimed at minimizing Extreme E’s emissions profile as well as facilitating scientific research through an on-board laboratory.