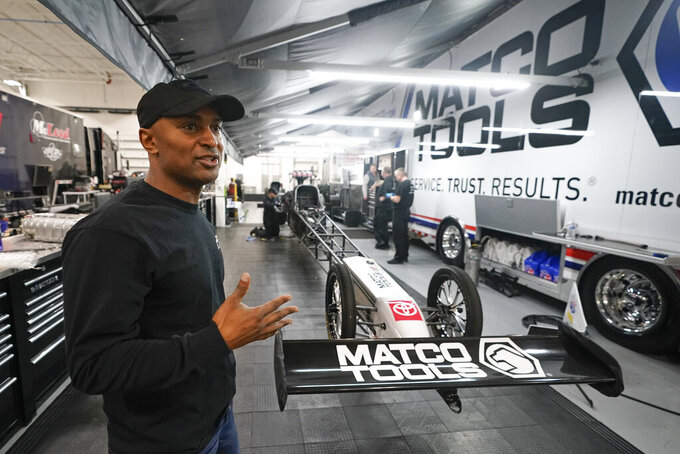 Antron Brown walks through the AB Motorsports Top Fuel team shop, Wednesday, Feb. 2, 2022, in Brownsburg, Ind. Antron Brown still walks into the same race shop he's called home for years. It's just different now. Sure, the 6,000-square foot area he rents still belongs to Don Schumacher Racing. And, yes, the banners hanging on the wall still reflect those three Top Fuel championships. But now the 45-year-old Brown finds himself digging through papers and boxes, waiting for deliveries and calling the shots as a new NHRA season beckons. This is Antron Brown's new life — as an owner-driver.(AP Photo/Darron Cummings)

It still belongs to Don Schumacher Racing and the three banners honoring his Top Fuel world championships still hang on the wall near his hauler.

This February, though, things are different.

Brown rifles through papers and boxes and chats with his wife, Billie Jo, about deliveries and golf shirts. He's paying bills and getting acclimated to a life he's only dreamed about until now — being a full-fledged NHRA owner.

“I wanted to start a legacy for my family like John Force has done," Brown told The Associated Press recently while preparing for next week's season opener in Pomona, California. “Now I can create opportunities for the people I see have that fire in their eyes, just like I had when I first started."

The soon-to-be 46-year-old father of three shows believes he can keep adding victories to his 52 career Top Fuel wins and keep contending for championships for another 15 years. His long-term goal is expanding the current one-car team to two cars and, perhaps, even compete against one of his children or a graduate of the NHRA Jr. Street program he works with.

Anything else would be unexpected from the man who speaks as passionately today about meeting Don Garlits in 1986 as he does about driving Pro Stock Motorcycles for former NFL player Troy Vincent or the glory days from the Schumacher era when he became the series' first Black champion in Top Fuel.

Along the way, Brown never stopped breaking barriers or overcoming obstacles in NHRA, which has a long history of diversity with deeper roots than many other sports.

Shirley Muldowney arrived in 1965 and her legacy as the First Lady of Drag Racing helped encourage dozens of other female drivers in a variety of disciplines including current Top Fuel contenders such as Brittany Force and Leah Pruett.

In 2018, J.R. Todd became the first Black champion in Funny Cars. He competes for Kalitta Motorsports.

Mexican-American Pedregon brothers — Cruz and Tony — each won two Funny Car titles. Their father, Frank, who was a well-known drag-racing star in the 1960s in the melting pot of Southern California. At age 58, Cruz Pedregon owns 58 career wins and his own team while Tony Pedregon left racing to join the NHRA on Fox broadcast team.

Brown's popularity stretches well beyond demographics. Fans flock to his pit stall all across America because Brown is a winner with a personality to match.

He routinely takes time to sign autographs and chatting with fans. Sometimes, Brown even gives a lucky youngster the thrill of a lifetime by plopping them behind the wheel of one of the world's fastest cars. It's one reason longtime sponsors such as Toyota and Matco Tools jumped onboard with AB Motorsports.

“Every time I see a kid, it reminds me of myself when I was outside that rope looking in. I let them in because every time I see that kid, I see myself again," Brown said. "So I take the time, and all it is is 2 minutes, but you can make a person's life, like ‘Big Daddy' Don Garlits did for me."

It's not just the corporations who followed Brown. Some of his longtime crew members came along for the ride with the one team, one mind, one purpose philosophy. Brown wants everyone here to feel like a family and has added a sticker to the car that includes the team logo, names of crew member and Brown's favorite Bible verse.

Still, he knows this business is all about return on investment. That means winning.

“I've been signing a lot of checks for a lot of bills," he said, noting Billie Jo has joked they've invested so much money in the team that the trucks could become their temporary home. “I want to make sure these guys have everything they need to be successful."

The incredible stash of trophies and prized mementoes he's collected through the years remain almost exclusively at his home rather than at the 6,000-square-foot headquarters he rents from Schumacher. Heck, he thinks the banners should even go back to his former team owner.

Brown would rather fill his shop with a new collection of hardware from the next phase of his career as a team owner. And he expects Schumacher to celebrate the even larger victories with him.

“He always told me that I’ve been like a son to him,” Brown said. “He said, ‘That’s great that you're going but I don’t really want you to go, if you know what I mean.’ He’s going to build up his race teams again but he knows when I come, I’m coming to win.”