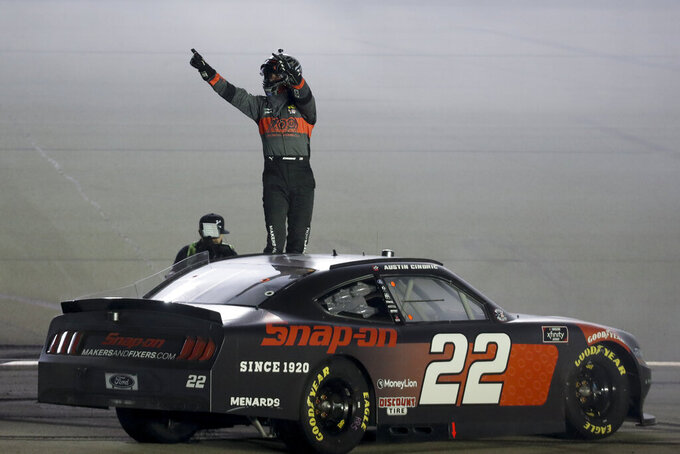 SPARTA, Ky. (AP) — In two nights, Austin Cindric went from the cusp of winning on ovals to showing his ability to dominate those layouts.

As Cindric threw his hands in the air after his most impressive win, Harrison Burton and Noah Gragson threw punches at each other in the only real battle at Kentucky Speedway.

Cindric dominated Friday night to sweep the NASCAR Xfinity Series doubleheader at Kentucky. A night after racing to his first career oval victory in an overtime finish, the Team Penske driver was even stronger in the No. 22 Ford Mustang in the 300-mile capper.

Cindric was third in the first stage, won the second and stretched it out in the final segment. He trailed briefly on the final restart, then sliced through two cars out of Turn 2 and rolled to victory by 2.262 seconds over points leader Chase Briscoe in the No. 98 Ford.

Just after Cindric celebrated his victory with a burnout, Burton and Gragson argued before throwing punches in a fight that lasted several moments before they were separated. Burton had on a mask, while Gragson didn't.

The two collided in the final laps, with both cars brushing the wall. The frustrations spilled over after the race, first with the drivers arguing nose to nose before they shoved each other and started duking it out.

“This has been two times since we’ve come back from the COVID-19 pandemic on restarts," said Burton, alluding to previous clashes with Gragson. "Same situation. We rallied all night to get our Supra into fourth place and then the No. 9 (Gragson) happens to start in third and I don’t know if he forgets what race track we’re at or what, but both times puts us in the fence — Charlotte and now here.

“I had a lot of people come up to me and say that was a long time coming, so I guess that was the popular move. I was just frustrated, and sorry for our team that that happened.”

NASCAR talked to both drivers but doesn’t anticipate any penalties or suspensions.

“We’re all racing hard,” Gragson said. "I really don’t have a comment, haven’t seen everything that happened.”

Justin Haley was third, followed by fellow Chevy drivers Ross Chastain and Justin Allgaier, who was cleared to race earlier in the day after being taken to a hospital following Thursday night's race for a non-racing related medical purposes.

The 21-year-old Cindric, son of Team Penske president Tim Cindric, won twice last year on road courses at Watkins Glen and Mid-Ohio. On Friday night, he led the final 43 laps and 130 of 200 overall.

“He (Cindric) was in a league of his own,” Briscoe said. “It seems like Penske has always been really good here.”

Gragson again showed early strength in taking the 45-lap first stage, his third segment win in two nights on the 1.5-mile oval. The race belonged to Cindric after that and the question was who would finish behind him.

The final restart on lap 188 offered some hope for Briscoe before Cindric quickly took it away by darting down the banking and between two cars and putting it out of reach.

It was much like the night before, just sooner and more thorough.