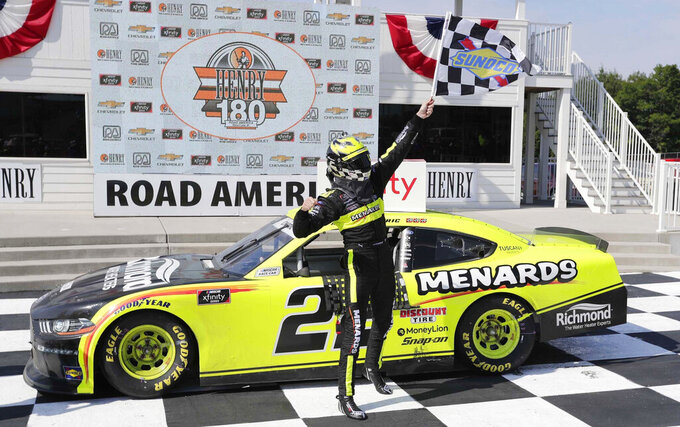 ELKHART LAKE, Wis. (AP) — Austin Cindric won a race that drove him to tears, though not in the way you might expect.

Cindric waited through a lightning delay Saturday at Road America and dealt with numerous caution flags on his way to his fourth victory in his last five Xfinity Series races. But the biggest obstacle of all might have been underneath his right eyelid.

“I’m sorry if I’m blinking a lot, but I got something in my eye halfway through the race, and it hurt so bad,” Cindric said as he kept wiping his eye during his post-race Zoom session. “I’ve been blinking like the entire last hour.”

Cindric led early on, fell off the pace after the weather delay, then charged back toward the front about two-thirds of the way through the race. He stayed ahead through two caution flags in the last six laps and beat A.J. Allmendinger by 1.318 seconds.

He made that charge while wondering what the heck was bothering his right eye.

“Something came in my visor or something, but it's been stuck under my eyelid from like halfway through the race,” Cindric said. “I’ve had tears rolling down my face the entire race. I can’t get it out. I was taking my gloves off and whatever.

“When you have the adrenaline, it’s not a big deal apparently. Right now, it’s driving me crazy.”

The 21-year-old Cindric strengthened his position atop the Xfinity Series points standings. He also bounced back from a tough finish July 25 at Kansas Speedway, where he settled for second place after Brandon Jones passed him on the final lap.

The Kansas race ended a string of three straight victories for Cindric that included a doubleheader sweep at Kentucky and a triumph at Texas. He was declared the winner in Texas after Kyle Busch was disqualified when his car failed a post-race inspection.

“It’s been incredibly gratifying,” Cindric said. “When I have a team behind me like I do this year, and those guys are so loyal to me and do such a good job with the tools that they have. When it comes to me, that’s my job, to do the best with the tools that I have, and I feel like from the start of this year, I’ve been getting the most out of the cars I’ve been driving. It’s gratifying to see that come with results.”

Cindric is the 11th different driver to win the Xfinity race at Road America in as many years.

After a caution flag came out with six laps left in the race, Justin Allgaier’s Chevy went off track on the restart and hit a concrete structure, causing another stoppage. They started back up with two laps remaining, and Cindric held off Allmendinger the rest of the way .

Saturday’s race had plenty of stops and starts, particularly early on. The opening stage that included the first 14 laps of the 45-lap event on Road America’s 4.048-mile road course took over 2 ½ hours to complete due to the 93-minute lightning delay and three caution flags.

“We got a little bit of everything — some weather, a lot of restarts,” Allmendinger said.

The drivers hadn’t even completed 10 laps when the lighting delay began. Cindric said the long wait wasn’t all that much of a problem.

“Honestly, it wasn’t as troubling as you’d think,” Cindric said. “Honestly, we got like a 10-lap practice, if you think of it that way.”

When the lightning delay stopped, the race continued under wet-weather conditions that gave crew chiefs the option of installing rain tires. Nearly all the drivers switched to the rain tires before the restart. Many went back to their usual tires late in the second stage once the rain stopped.