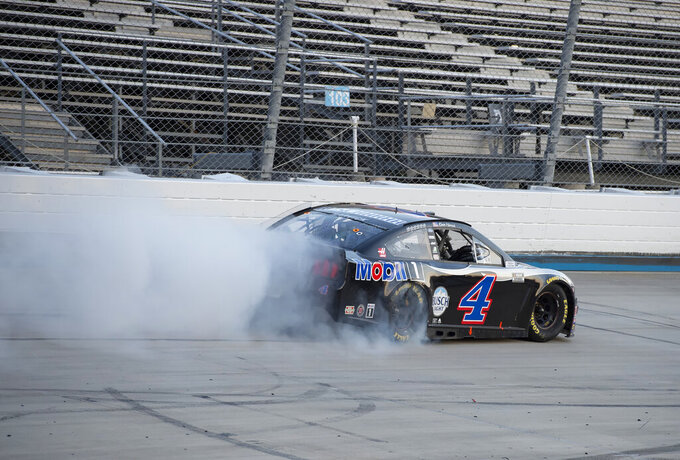 Last year: Justin Haley won the second race on the Daytona tri-oval last year from the 34th starting position, the furthest back in the field a winner started all season.

Last race: Kevin Harvick clinched the regular-season series championship at Dover with his series-best seventh victory of the season and the 56th of his career.

Fast facts: Harvick passed Rusty Wallace and tied Kyle Busch for ninth on the career victories list. The clinch also earned him a 15-point bonus for the upcoming playoffs. ... Harvick leads the point standings by 134 over Denny Hamlin and 160 over Brad Keselowski. ... Harvick and Hamlin, who won the first Cup race at Dover, have combined to win more than half of the 25 races run this season.

Last race: Chase Briscoe started from the rear in a backup car, took control with 20 laps to go in the second stage and won the back end of a series doubleheader at Dover.

Fast facts: Briscoe closed to within 62 points of series leader Austin Cindric through 21 races. Noah Gragson is third, 97 points behind. ... Cindric had won five of the past six races before coming up empty in the Dover twin bill. ... Briscoe leads the series with six wins and Cindric has five. Three drivers share third with two wins each. ... There are five races left in the regular season before the 12-team playoffs begin Sept. 26 at Las Vegas.

Last race: Zane Smith won for the second time in three races, holding off Matt Crafton and Brett Moffitt after a restart with three laps to go.

Fast facts: Smith moved to within 41 points of series leader Austin Hill after 13 races, with Moffitt another six points back. ... Smith, Sheldon Creed and Grant Enfinger are the only series regulars with multiple victories this year. ... Crafton leads all drivers with seven top-5 finishes, but stands just seventh in points thanks to two finishes of 35th or worse.

Last race: Sato won the Indianapolis 500 for the second time in four years.

Fast facts: Sato became the fourth different driver to win in the last four races since Scott Dixon opened the season with three consecutive victories. ... Dixon still leads the points race by 84 over Josef Newgarden through seven races. Patricio O'Ward and Graham Rahal are next, 117 and 121 points off the pace with five more races on the schedule as it currently stands. ... This will be the series' third doubleheader weekend (Road America, Iowa Speedway).

Next event: The series will return to action Sept. 3-6 for the DENSO Spark Plugs US Nationals at Lucal Oil Speedway, Indianaopolis, Indiana.

Series will race on Saturday at US 36 Raceway in Osborn, Missouri, and on Sunday at I-80 Speedway in Greenwood, Nebraska.