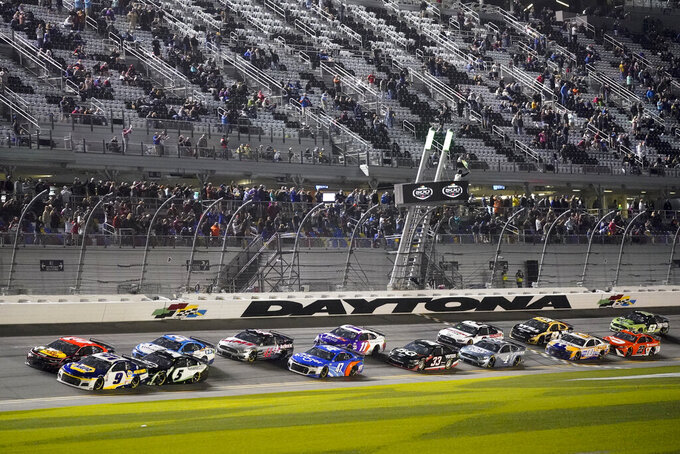 FILE - Drivers restart after a weather delay during the NASCAR Daytona 500 auto race at Daytona International Speedway, Sunday, Feb. 14, 2021, in Daytona Beach, Fla. It's another season of change for NASCAR as it prepares for Sunday's opening Daytona 500.(AP Photo/John Raoux, File)

Last race: Kyle Larson won the season finale at Phoenix, his 10th win of the season, and claimed his first season championship.

Fast facts: Larson's 10 wins were by far the most in the series. Martin Truex Jr. and Alex Bowman were next with four wins each. ... Larson finished in the top five 20 times in 36 races. Denny Hamlin was next with 19 top-five runs. ... Former Formula One champion and Indy 500 winner Jacques Villeneuve will be among those trying to qualify for the race. ... Joey Logano won The Clash, a preseason exhibition on a quarter-mile oval at Los Angeles Memorial Coliseum.

Last year: Austin Cindric won after starting on the pole.

Last race: Daniel Hemric won for the first time in 120 career starts to claim the series championship after starting fourth at Phoenix.

Fast facts: Hemric finished on the lead lap a series-best 31 times in 33 races in 2021. ... Cindric has moved up to the Cup Series driving for Team Penske.