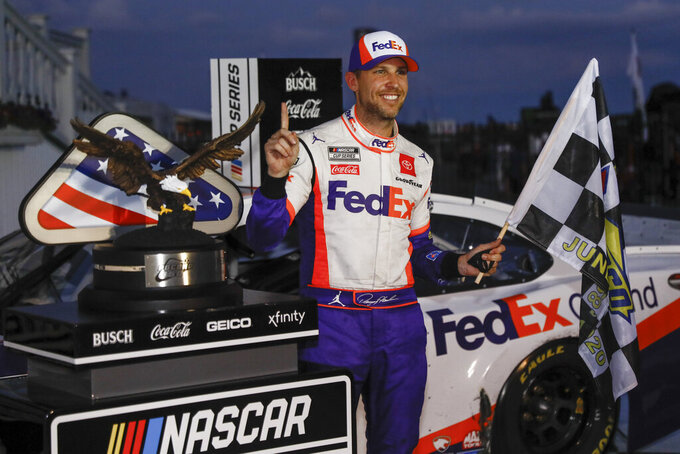 Jockey Made in America 250 Presented by Quik Trip

Last race: Kyle Busch won the second half of a doubleheader at Pocono, ending a six-race winning streak for Hendrick Motorsports.

Fast facts: Without a win, Denny Hamlin's points lead has dwindled to just two points over Kyle Larson. William Byron is 71 points back and shares the lead with Larson and Kevin Harvick (ninth in points overall) with 14 top-10 finishes in 19 races. ... Larson has finished first (four times, including the non-points All-Star race) or second (four times) in eight of the last nine races. ... Alex Bowman's third victory of the season at Pocono had extended the Hendrick streak to six in a row.

Last race: Cindric held off a challenge by rookie Ty Gibbs to win at Pocono, his fourth victory of the season.

Fast facts: Cindric leads A.J. Allmendinger by 101 points in his quest for a second consecutive series title. Daniel Hemric is third, 112 points behind. ... Cindric's four victories are twice as many as any other series regular. Allmendinger, Justin Allgaier and Gibbs have all won twice. ... Hemric leads all drivers with 15 lead-lap finishes in 16 races.

Last race: John Hunter Nemechek passed team owner Kyle Busch on a restart with six laps to go and won at Pocono, his series-best fifth victory of the season. ... There are two races remaining — July 9 in Iowa and Aug. 7 at Watkins Glen, New York — before the 10-driver playoff field is set.

Last race: Max Verstappen led from start to finish for his series-best fourth victory of the season in the first of consecutive races on the Red Bull Ring in Austria.

Fast facts: Verstappen, a winner in consecutive races for the first time in his career, leads seven-time champion Lewis Hamilton in points, 156-138. Verstappen's Red Bull Honda teammate Sergio Perez is third with 96. ... Verstappen has won three of the last four races, and it was a tire issue while leading at Azerbaijan that spoiled a shot at four in a row. ... Hamilton has won 11 races — and the championship — in each of the last three seasons. Through eight races this year, he has won three times.

Last year: Will Power and Colton Herta won on consecutive mid-September days after starting on the pole.

Fast facts: Palou leads Pato O'Ward, the only other two-time winner this season, by 28 points in the driver standings through nine races. Six-time series champion Scott Dixon is third, 53 points behind. ... Dixon has led 396 laps, by far tops in the series. Dixon and fifth-place Simon Pagenaud are the only drives to finish on the lead lap in all nine races.