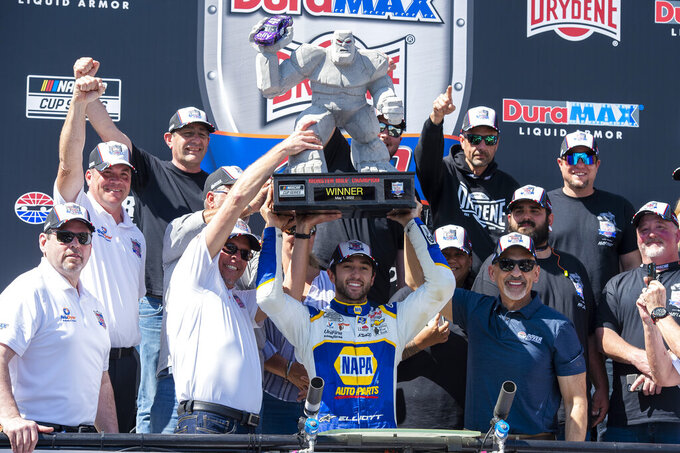 Last race: Chase Elliott led the final 53 of 400 laps, contested over two days because of rain at Dover, to earn his first victory of the season.

Fast facts: Elliott increased his points lead from 21 to 50 over Ryan Blaney. William Byron and Kyle Busch share third, 65 points back. ... Elliott also became the ninth different winner in 11 races and the fourth Hendrick Motorsports driver to win this season; no other organization has had all four of its drivers win in the first 11 races of a season. ... The top six drivers have accounted for seven victories thus far, with Byron and Ross Chastain having two each and Blaney none. ... Chevrolets have won seven races, Ford and Toyota two each.

Last race: Josh Berry held off Allgaier, his JR Motorsports teammate, by 0.604 seconds at Dover for his first victory of the season and the third of his career.

Fast facts: JRM drivers claimed four of the top five spots, with Noah Gragson fourth and Sam Mayer fifth, the first time any team has done that since 2013. ... Ty Gibbs was third, preventing a 1-2-3-4 finish for JRM. ... A.J. Allmendinger continues to lead the points, now by 43 over Gibbs and Gragson. .... Allmendinger has finished in the top 10 in all 10 races this season. ... Gragson leads with seven top-five finishes, one more than Allmendinger.

Last race: Defending series champion Ben Rhodes won on the dirt at Bristol, his first victory of the season.

Fast facts: Rhodes leads Chandler Smith by 38 in the point standings with Stewart Friesen third, 51 behind. Zane Smith, the only two-time winner through six races, is fourth, 54 back. ... Rhodes has five top-five finishes. No one else has more than three. ... Corey Heim, who has raced just twice, and Cup Series regular William Byron account for the other two victories in the series.

Last race: Defending series champion Max Verstappen rebounded from a blown engine in the previous race and led Red Bull’s first 1-2 finish since 2016 as he won from the pole at Imola.

Fast facts: Verstappen jumped from sixth to second in the points race, now 27 behind Charles LeClerc. Each has won a pair of the four races run this season. ... LeClerc has led 143 of the 228 laps run so far or 62.7 %. ... Organizers went through 36 different layouts before settling on a 19-turn circuit for the race.

Last race: Pato O’Ward passed Rinus VeeKay on the outside after pit stops for tires at Barber Motorsports Park and won for the first time this season.

Next race: May 14, Indianapolis, Indiana.

Next event: May 15, Dinwiddie, Virginia.