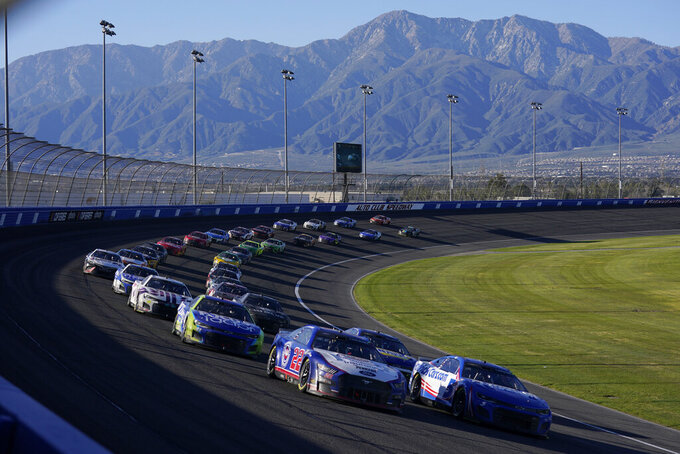 Last race: Larson passed Daniel Suarez with two laps to go and held off a challenge by Austin Dillon to win by 0.195 seconds at Fontana, California.

Fast facts: Larson's victory was his 11th in the last 35 Cup Series races. ... He won despite starting at the rear of the field after unapproved adjustments to his Camaro. ... Tyler Reddick won the first two stages at Fontana and led 90 laps before crashing with a a flat tire. ... After two races, Aric Almirola is the only driver with a pair of top 10 finishes. ... The race featured 32 lead changes among nine drivers in the second race for the Next Gen car.

Last race: Cole Custer outran Noah Gragson in the third overtime to win for the second time in his career at Fontana, California.

Fast facts: Allmendinger leads Gragson by one point and Justin Allgaier by three points through two races. They are among six drivers with two top-10 runs. ... Gragson is the only driver with two top-five finishes. ... Defending series champion Daniel Hemric is ninth in the standings.

Last race: Zane Smith won at Daytona in overtime after a 17-car pileup on the final lap.

Fast facts: Smith was the championship runner-up to Ben Rhodes last season. Rhodes is second in points after one race. ... Former NHRA racer Tanner Gray finished fourth in the season-opener at Daytona and is fourth in the standings.

Last race: Scott McLaughlin led 49 of 100 laps and held off reigning series champion Alex Palou over the closing laps for his first career victory in the season-opener at St. Petersburg, Florida.