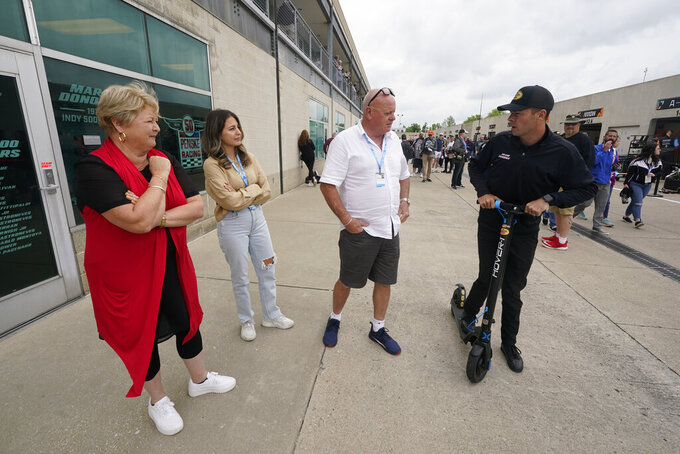 Scott McLaughlin, right, of New Zealand, talks with his parents Wayne and Diane McLaughlin, and his wife Karly McLaughlin, second from left, in Gasoline Alley before qualifications for the Indianapolis 500 auto race at Indianapolis Motor Speedway, Sunday, May 22, 2022, in Indianapolis. (AP Photo/Darron Cummings)

INDIANAPOLIS (AP) — The first thing Wayne McLaughlin noticed when he saw his son for the first time in 31 months was how much weight he had lost.

Scott McLaughlin had moved to the United States in late 2020 to become an IndyCar driver, and pandemic restrictions in Australia and New Zealand prevented him from saying goodbye to his family. Finally able to travel out of New Zealand, his parents began their 14th trip to the United States to watch their son run the Indianapolis 500.

The overdue reunion for Wayne and Diane McLaughlin came at Indianapolis Motor Speedway.

“It was weird, I was a little bit nervous to see them,” Scott McLaughlin told The Associated Press. “It was just all this energy and excitement and I was weirdly nervous.”

FaceTime had kept the family connected, but those calls had not prepared his parents for how they'd find their 28-year-old son. McLaughlin lost weight when he left Australia, where he won three consecutive V8 Supercars championships, but then had to build muscle to handle cars that lack power steering and travel 200-plus mph.

“We knew he lost a lot of weight," Wayne McLaughlin told AP. “He was always a pretty fat guy, he's already been reasonably solid, and I just got a big shock to see him.”

There was more to come.

McLaughlin's parents watched qualifying from a Team Penske pit stall and his mother couldn't take the speeds, which topped 230 miles per hour (370.15 kph).

“I was looking for a bucket,” Diane McLaughlin laughed.

Wayne and Diane had enjoyed racing as a couple before their two children were born. They bought their son a go-kart for his seventh birthday as a hobby, but wouldn't let him race for the first six months.

When they finally entered him in competitions, the kid turned out to be pretty good. Wayne McLaughlin decided to move the family from New Zealand to Australia — partly for a trucking business Wayne owned — but also to further their son's career.

“Wayne said, ‘If he’s going to be any good in racing, if he wants to get to V8, we really need to be in Australia,'” Diane McLaughlin said. “And I'm going, ‘The kid is only nine!’”

It wasn't long before Wayne McLaughlin realized it wasn't "dad and son racing anymore” and found some help with one rule: absolutely no open-wheel racing.

But then McLaughlin made it to V8 Supercars, and then Roger Penske bought into the team McLaughlin was with and the Kiwi became a full-blown star in Australia.

Team Penske wanted to move McLaughlin to the U.S. to race. McLaughlin assumed it would be a NASCAR opportunity; Penske instead took him to IndyCar — an open-wheel series.

“But he's a grown man now, what are we to say?” asked Wayne McLaughlin.

It was terrifying for his parents, but conversations with Penske and team president Tim Cindric "assured us they'd take care of our boy,” said Wayne McLaughlin.

When the pandemic began, McLaughlin was finishing his final Supercars season in Australia while his parents were in New Zealand. Travel lockdowns prevented them from seeing each other before McLaughlin and his wife headed overseas.

For the first time in his career, his parents weren't a part of it. McLaughlin was more than 8,000 miles away racing in a series they found uncomfortable and knew little about.

The rims around Wayne McLaughlin's eyes turned pink and teared up multiple times talking about the 31 months from when they last saw their son and the journey he's taken without them.

“We were heartbroken,” says Wayne McLaughlin.

“We didn't get to say goodbye,” added Diane.

“And now he's moving to America and going into a category that is the best in the world and we couldn't be there and we've been with him since this started when he was just a boy,” continued Wayne.

Watching their son compete in his IndyCar rookie season required waking up at 4 a.m., relying on McLaughlin's wife, Karly, to keep them informed during a race weekend, and a lot of yelling at the television. Wayne McLaughlin went viral when his son posted a video of his “Number One fan.”

When McLaughlin's sister arrives this week, it will be the first time the entire family has been together since McLaughlin's wedding in 2019. His parents' visa is good for 12 weeks and they'll travel to nine IndyCar races and spend time at Scott and Karly's North Carolina home.

They are ardent fans of the U.S. — this week marks the McLaughlins' 14th trip to America, his parents toured Indianapolis Motor Speedway years ago and Wayne McLaughlin has a decal of the American flag covering the back window of his Chevrolet Silverado.

The opportunity for their son to move to their favorite country and drive for Roger Penske, who promised McLaughlin was in good hands, was too good for to pass up.

“They knew we were very anxious and they pushed the safety, Roger invited us after the wedding to Charlotte to see the shop and meet everyone, and it made us feel better,” Wayne McLaughlin said. “This is new racing to us. But we're here now and we can't wait to see Scottie in the Indy 500.”