Best seats at the track: Race viewing from comfort of condo 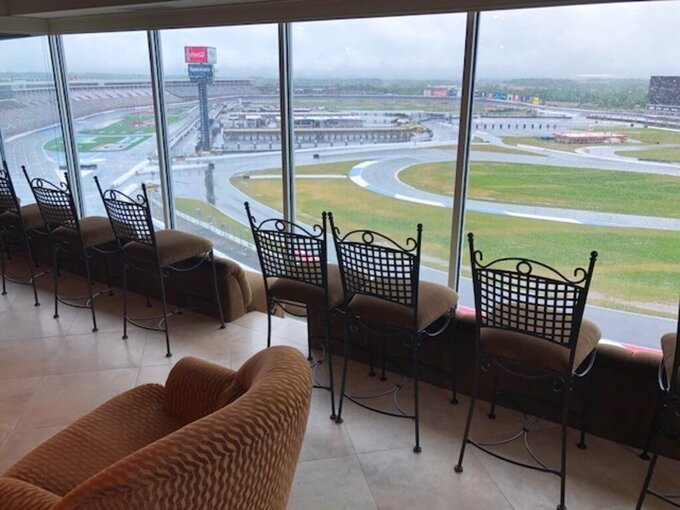 View from a condominium at Charlotte Motor Speedway in Concord, N.C. Wednesday, May 20, 2020. Fans aren't allowed to watch NASCAR races live yet due to the coronavirus restrictions -- unless you happen to own a condominium at Charlotte Motor Speedway. The condos at the track create a unique loophole in the rules where owners who live there -- and four of their friends or family -- will be able to watch the Coca-Cola 600 on Sunday from the comfort of their trackside condos. (AP Photo/Steve Reed)

CONCORD, N.C. (AP) — Robin Trivette is a popular person this week with the Coca-Cola 600 approaching and it has nothing to do with her bubbly personality.

It’s all about her connections.

Trivette lives in a condominium built on Charlotte Motor Speedway property, which makes her one of the first spectators eligible to actually watch a live professional U.S. sporting event in person since the coronavirus pandemic shut down sports in early March.

NASCAR has returned to racing without spectators through at least June. After three races this past week at Darlington Raceway in South Carolina, the series shifts to the Concord track on Sunday. The Coca-Cola 600, the longest race on the NASCAR schedule and an annual salute to the Memorial Day patriotism that celebrates fallen military heroes, will be run with empty grandstands.

But some will be watching: Thanks to a quirky loophole based on the development of the speedway, there are 52 condominiums that overlook the first turn of the track.

Keeping with tradition, condo owners will still get five tickets and three parking passes for the race and for the Cup Series race next Wednesday. That means Trivette, her friends and other condo residents can watch the race live while every other fan will have to watch on television.

“All of a sudden, everybody is your friend and wants to come over and bring dinner,” Trivette said with a laugh. “Unfortunately we can’t have that.”

Charlotte, Atlanta and Texas Motor Speedway, facilities all owned by Speedway Motorsports, have condo towers with floor-to-ceiling windows with a clear view of the track. Some are decorated as lavish homes with king-size beds, leather couches and custom-made bars, while others resemble rentable hospitality rooms for entertaining guests.

Most of the Charlotte condo owners have some connection to NASCAR, but few live at the track year round. They’re mostly used to entertain clients during races, although Trent Cawthon of TriMaxx Graphics in nearby Mooresville uses his condo for both. TriMaxx produces vinyl graphic paint schemes for several Cup teams including Ryan Newman and Ricky Stenhouse Jr.

Residents typically received five complimentary tickets from the speedway with an option to purchase up to 15 or 20 more depending on the size of the condominium. Residents are allowed just the five tickets this year and security is expected at the entrance to the building to prevent additional guests. Once inside, everyone must stay in the condo before and during the race.

He said his phone has been “ringing off the hook” this week with requests from friends who are craving live racing. Instead of hosting a typical watch party, he’s planning to hunker down with three buddies and some pizza and beverages to watch the race. .

“I love it that way,” Cawthon said. “You don’t have to worry about the hospitality and making sure everyone has enough food and drinks, and then making sure some of these people don’t have too many drinks before they head home. So it’s a lot less hassle.”

He said it will be a different experience though, for sure.

“It’s going to be exciting to watch it from up there,” said Cawthon, who purchased the condo in 2018. “But it will also be a little odd looking out and seeing no one in the grandstands, too. That will be a little eerie.”

Randy Knighting, who sponsors the No. 3 Chevrolet by Jordan Anderson in the Trucks Series, will be making the trek from his home in Olympia, Washington, to watch the race. In a normal year, he’d be hosting a hospitality event at the condo or might have rented it out. But he plans on being at the Coca-Cola 600 on Sunday to watch the race from his third-floor condo with his girlfriend and her two daughters.

“This is the girls’ first race, so it will be exciting,” said Knighting, who also owns condos at the speedways in Atlanta and Texas. “I’m glad that NASCAR and other sports are figuring out a way to get things moving, while still keeping people safe.”

Trivette said she has already chosen her four guests and plans to host family members of Cup drivers William Byron and Alex Bowman on Sunday. They will be among the first driver family members to attend a race. At Darlington, drivers were required to drive to the track alone, leave their families and support staffs at home, and isolate themsleves at the track.

Trivette plans to bring food in early in the day, a change from having it delivered right before the checkered flag. Deliveries won’t be allowed Sunday.

She said she feels “very, very fortunate” to be able to watch the race but can sympathize with fans who won’t be able to see the lavish pre-race show, race and post-race fireworks display.

“It brings tears to my eyes knowing the fans won’t be there in the stands to see that, because it’s pretty special,” Trivette said.