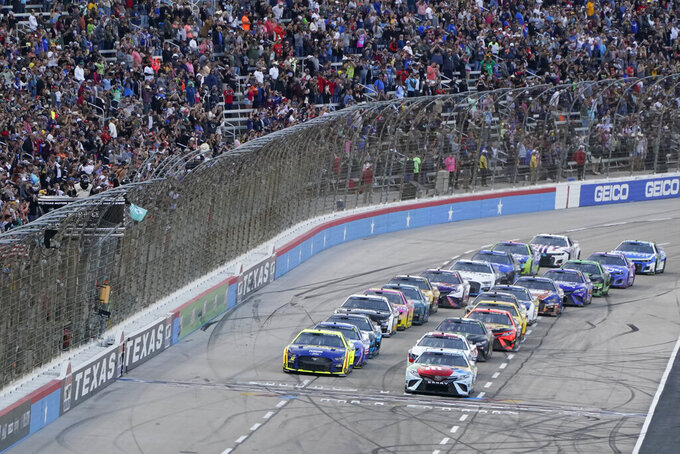 FORT WORTH, Texas (AP) — The checkered flag was already waving for Ryan Blaney when the caution lights came on just yards before he got to the line to win NASCAR's All-Star race and $1 million. He had to get his window net back in place and go two more laps.

Blaney’s crew was already celebrating the victory in the pits and the driver had already lowered the window net of his No. 12 Ford after crossing the start-finish line. But the All-Star race has to finish under green.

“That rule was never kind of relayed to us. I already took my window net down and everything. My left arm is worn out from trying to get that damn thing back up,” Blaney said. “I got it rigged up enough to where it halfway stayed.”

After the caution period, when Blaney was fiddling with the net while having to maintain speed, he stayed in front through a green-white-checkered finish. Pushed by his Penske teammate Austin Cindric on the restart, Blaney was able to stay in front and hold off Denny Hamlin, who finished 0.266 seconds behind.

“I appreciate NASCAR for not making us come down pit road to fix it and letting me get it clipped back again to where we could stay out there,” Blaney said.

Hamlin said NASCAR was wrong on both fronts, first for even calling the caution for Ricky Stenhouse Jr. going into the wall on the backstretch in the back of the field.

“Never should have been a yellow in the first place. They put Blaney in the situation he was in. To make up for it they let him break a rule. 2 wrongs don’t make a right. Blaney W, NASCAR L,” Hamlin tweeted minutes after the race.

“Obviously I think everybody knows that we probably prematurely called that yellow flag,” Scott Miller, NASCAR’s senior VP for competition, told reporters. “The way that works in the tower ... we all watch and we saw the car and mentioned the car against the wall, riding the wall down back the back straightway. The race director looked up, and I’m not sure what he saw, but he immediately put it out. Wish we wouldn’t have done that.”

Blaney, who said he can understand Hamlin's frustration, said NASCAR deemed the net safe when he was on the backstretch before the final restart. Blaney said the net was latched and he had both hands on the wheel.

Miller said the window net was up and there was no way for NASCAR to know if Blaney got it 100% latched, but also couldn't be certain at that point if he didn't have it done.

Cindric finished third and Joey Logano, another Team Penske driver, was fourth. Daniel Suarez, who got into the main event like Stenhouse through a 16-car open qualifier earlier in the day, finished fifth.

It was the fourth All-Star race victory for Roger Penske’s team. The last had been Logano in 2016.

“This Mustang was a rocket ship,” Blaney said. “I am really glad we ended up winning that after that last caution. ... Tonight will be fun.”

Busch, the polesitter and 2017 winner, was leading when he had a flat right rear tire coming out of the fourth turn on lap 48 late in the second stage. He was slowing and going toward the bottom of the frontstretch when he was hit from behind by Ross Chastain, who was going about 185 mph.

Chastain's No. 1 car went almost all the way on its left side after the rattling collision, before dropping back on all four tires and then careening toward the outside of the track and into 2020 All-Star winner Elliott.

“I saw Kyle have an issue with a tire down. I guessed left and I should have guessed right,” Chastain said.

Busch was the polesitter and had led all but one of the first 48 laps before the wreck. His No. 18 car wiggled coming out of the fourth turn because of a flat right rear tire, before slowing on the frontstretch.

That came only a few laps in the second stage after Larson, who had won his previous two All-Star starts (2019 and 2021), got loose going into fourth turn and slammed hard into the wall before sliding through the grass infield. Larson hadn't changed tires, and had a right front tire go down.

“It just let go in the center and took off," Larson said. “I hate that it happened. I feel like our car was good enough, depending on restarts since you can’t pass at all, especially the leader anyways.”

Busch had led all 25 laps in a caution-free first stage after starting from the pole.

Cindric was first at the end of the second segment. Blaney was second, just like he was at the end of the first stage after starting the race there. Blaney won the third 25-lap stage and started the final 50-lap run at the front with Penske teammates Cindric and Logano, whose team had the fastest pit stop between the second and third stages.

The Coca-Cola 600 at Charlotte Motor Speedway next Sunday begins the second half of the 26-race regular season before the 10-race playoff chase begins. It will be the 14th points race this season.