Boyd gets 1st career win after Sauter stripped of victory 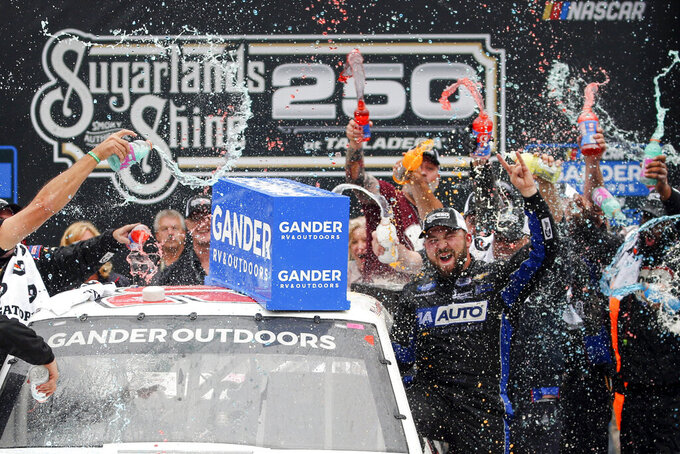 TALLADEGA, Ala. (AP) — Spencer Boyd was named winner of the Truck Series race Saturday after Johnny Sauter was stripped of the victory for forcing a driver below the out-of-bounds line at Talladega Superspeedway.

Sauter had blocked his way around the 2.66-mile superspeedway for the final two-lap overtime shootout. His defensive driving included forcing Riley Herbst below the yellow line right before he crossed the finish line. That put the finish under review; NASCAR had to determine if Sauter's move was illegal.

Sauter didn't wait for a ruling, doing a victory celebration on the frontstretch and collecting the checkered flag, while Boyd waited outside his truck on pit road. A crew member told Boyd he had just won his first career race.

"You dream of winning races, four years ago I was selling cars with my dad for Hendrick Automotive," said Boyd, who added that he put together the sponsorship to run Saturday's race only in the last two weeks. "You never know what's going to happen here. Sitting there second, was going to be happy. Then one of my crew guys said, 'You won!'"

The previous best finish for the 23-year-old was fourth in the season-opening race at Daytona. His celebration was harried, too, because Boyd was scheduled to qualify for the Cup race immediately after the completion of the Truck Series race.

Sauter learned the win had been taken away as he was driving toward victory lane. He was eliminated from the playoffs in the last truck race when his engine failed.

"Ain't the first win NASCAR has taken from me," said Sauter, who added that the block on Herbst was his only move. "I didn't block his advance or anything. Just hate it for my guys."

Playoff driver Ross Chastain caused an 11-truck crash when he failed at throwing a block as the leader with six laps remaining. He cut across traffic and was spun, creating enough carnage that the race was stopped for the second time for lengthy cleanups.

"I definitely turned left on him, sorry to everybody that got taken out," Chastain said. "That one is on me."

The stoppage of 16 minutes, 31 seconds did nothing to calm the drivers for the final push. Gus Dean sent the race into overtime when he crashed with two laps remaining, setting up Sauter's failed winning bid.

Todd Gilliland finished second and was followed by Herbst, Brett Moffitt, Stewart Friesen and Austin Hill. Sauter was dropped to 14th in the final finishing order.