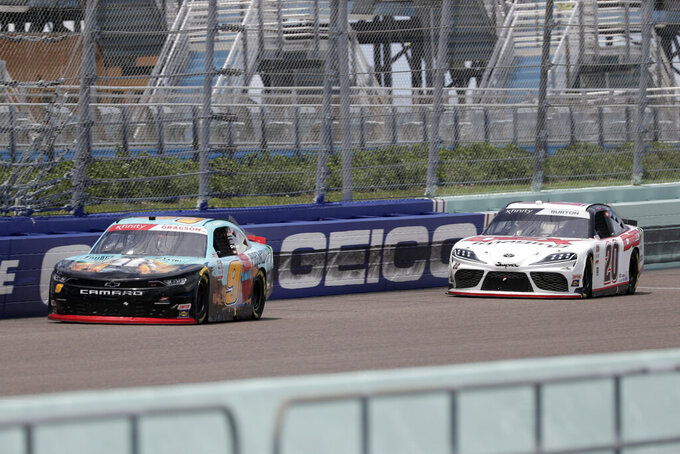 HOMESTEAD, Fla. (AP) — Chase Briscoe lost much of his team and got a win for them.

Briscoe survived two late cautions and a frantic overtime finish to prevail in an Xfinity Series race at Homestead-Miami Speedway — while adding to a nightmarish weekend for Noah Gragson, who saw a huge lead slip away in the final laps for the second consecutive day.

Briscoe was without crew chief Richard Boswell, car chief Nick Hutchins and engineer DJ Vanderley, all of whom began serving four-race suspensions for a safety violation that happened Saturday. So Briscoe — a big Tony Stewart fan growing up — got Stewart-Haas Racing competition director Greg Zipadelli to fill in as his crew chief and prevailed.

“It’s just a testament to our team,” Briscoe said.

Brandon Jones was second, Ross Chastain was third and A.J. Allmendinger was fourth. Gragson placed fifth, losing not only a race that was in his hands for the second straight day but also the $100,000 “Dash For Cash” bonus that wound up going to Allmendinger instead.

“Guess we’ll go to Talladega and do it again,” Allmendinger said.

With 15 laps to go, it was basically down to a two-car race: Gragson was leading, about 2 1/2 seconds ahead of Briscoe. Nobody else was within 10 seconds of the lead, a very similar scenario to Saturday when Gragson had a huge lead over Dale Earnhardt Jr. going into the last laps before a caution tightened the field and gave Harrison Burton the chance to grab the win on the final lap.

With every lap, Briscoe chipped away. He got within 2 seconds. Then a second and a half. Then a second. But he brushed the wall with about three laps left, slowing his momentum — or so it seemed.

Austin Cindric spun out and brought a late caution, derailing Gragson’s momentum and setting up the first of two overtime finishes. Gragson never had control of the race again, and Briscoe wound up in victory lane.

“The team did an unbelievable job to set up the car,” Gragson said. “We had the lead there at the end. ... I have to start working on myself. That’s unacceptable by my standards. These guys, they work their tails off and it’s not to run fifth. It’s to win these races.”

“That was a team win, for sure,” Briscoe said.

Briscoe’s victory capped a historic weekend for the Xfinity cars.

It was the first time that the series — by any of its names since it was first formed in 1982 — raced on consecutive days at the same track, the obviously odd occurrence happening this year because of all the rescheduling caused by the coronavirus pandemic.

The back-to-back at one track is scheduled to occur again July 9 and 10 at Kentucky.