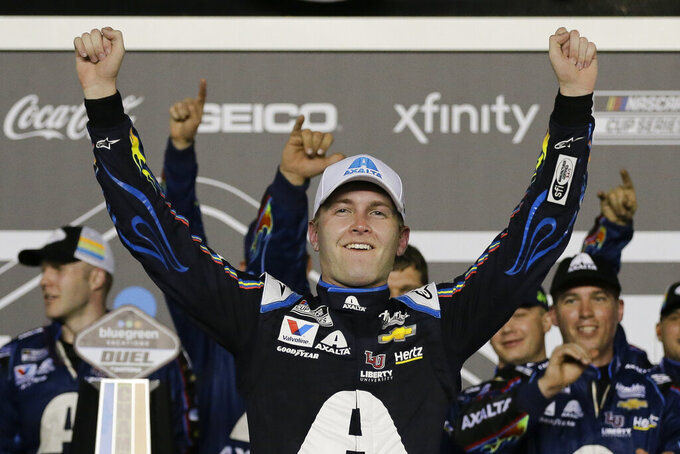 FILE - In this Feb. 13, 2020, file photo, William Byron celebrates after winning the second of the two NASCAR Daytona 500 qualifying auto races at Daytona International Speedway in Daytona Beach, Fla. Byron won his second consecutive NASCAR virtual race Sunday, April 19, 2020, by holding off Timmy Hill — the driver who moved him out of the way to win an earlier iRacing event — in a race finally low on dramatics. (AP Photo/Terry Renna, File)

CHARLOTTE, N.C. (AP) — Nobody did anything to get fired or lose a sponsor in this week's edition of NASCAR virtual racing.

William Byron won his second consecutive NASCAR virtual race on Sunday by holding off Timmy Hill — the driver who moved him out of the way to win an earlier iRacing event — in a race low on dramatics.

Matt DiBenedetto was parked after twice crashing at virtual Richmond Raceway with Ryan Preece, the second incident clearly intentional. It triggered a Twitter spat between the two, with DiBenedetto demanding Preece's address to go to his house to fight and Preece replying he'd give it to him if DiBenedetto showed up in the giraffe costume he wore while competing Sunday.

Jimmie Johnson manually disconnected his simulator rather than wait out late-race repairs, and Kevin Harvick ate his lunch from the seat of his rig as he was in a 20-minute hold for repairs.

But that was about it in terms of controversy on a day NASCAR desperately needed a drama-free event.

Kyle Larson was fired this week for using a racial slur during a non-NASCAR sanctioned iRacing event last Sunday night, and drivers and fans are showing signs of losing some of the excitement that initially engulfed this virtual racing league when it launched during the coronavirus pandemic.

Byron, 22 and in his third Cup season driving for Hendrick Motorsports, is an avid iRacer who learned to drive a stock car through the platform.

“I wasn't in a racing family growing up and obviously this was my avenue to cut my teeth,” Byron said. “I'm very thankful for what it has done for me. Driving the 24 car in real life for Hendrick Motorsports is a dream and I was really just a kid on here that was excited, a NASCAR face in a channel when I was racing against them. Now I am racing against them in real life."

Resets were eliminated to make it a cleaner race, and NASCAR and broadcast partner Fox initially trimmed the field in an effort to avoid the wreck-fest from virtual Bristol two weeks ago. That created a wave of backlash as the drivers dropped were both full-time Cup participants or had sold sponsorship for the iRaces.

As a concession, a heat race was held Sunday morning in which 11 drivers tried to finish inside the top two to advance into the main event. Bobby Labonte and Landon Cassill raced in, and because it is an invitational, Fox offered two more spots to Dale Earnhardt Jr. and Daniel Suarez. Earnhardt earlier in the week pulled out of the race to give his spot to an active driver, but he joined the heat race when the rules were changed and competed in the main event.

There were still crashes, including one involving Bubba Wallace and Clint Bowyer for the second consecutive iRace. Wallace had “rage quit” at virtual Bristol after wrecking with Bowyer and his sponsor for the event fired him on the spot.

But he and Bowyer did have early contact, to which Bowyer noted, "two races in a row I got Bubba-ed." Bowyer has been Fox's in-race reporter and was invited to join Mike Joy and Jeff Gordon in the “booth” but tweeted “Beer :30 folks!” before settling in as a commentator. Wallace, for his part, was the final car on track this Sunday.

Harvick made his iRacing debut, likely pushed by his sponsors and race team to get involved in the only activity drivers can do right now to promote their partners. Brad Keselowski got his directive straight from team owner Roger Penske. After using a borrowed simulator in his first event, Keselowski sprung for his own rig this week — a purchase he's not sure he can expense back to the boss.

The platform has become an important initiative for almost all of NASCAR's stakeholders and it twice set esports viewership records for Fox. Hendrick Motorsports was the first team to have its drivers do remote meet-and-greets with sponsors, and Ford used Sunday's race to promote “Project Apollo" — its effort to produce personal protective equipment for health care workers — on several of its drivers' cars.

But Wallace losing his sponsor was the first sign of cracks in a series rapidly put together a week after the sports shutdown caused by the coronavirus pandemic. Then Larson was fired, and with the massive hours required to practice on the simulators each week, some drivers have seemed weary of the series. There's also a worry of over-saturation as nearly every professional racing league has some sort of iRacing events, and nonsanctioned races are being held every night of the week.