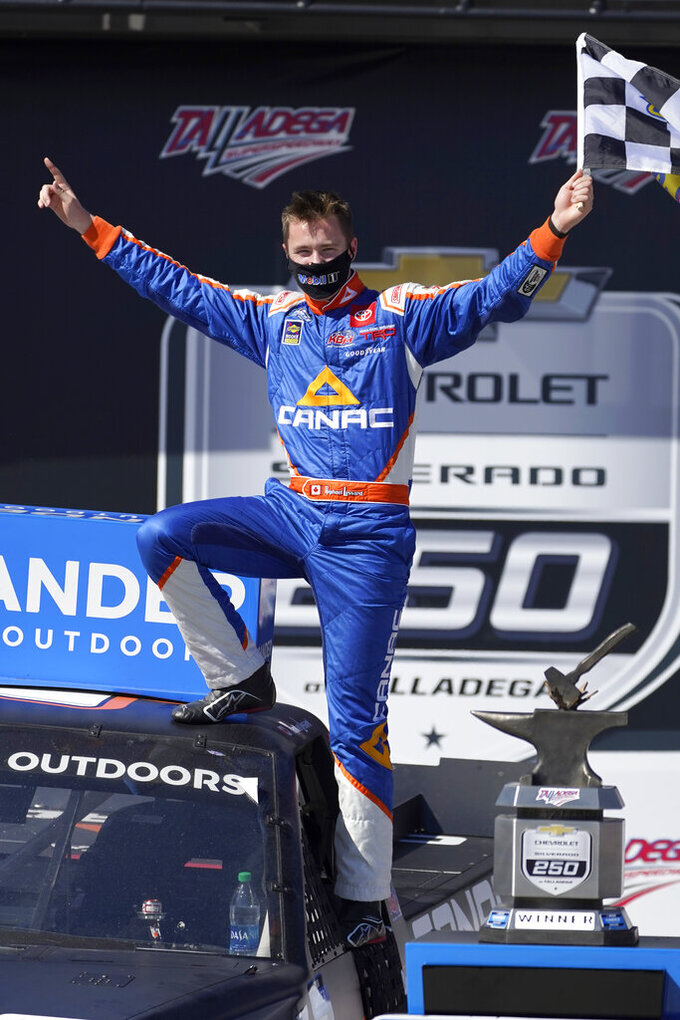 Lessard was racing side-by-side with Trevor Bayne on the final lap of the two-lap overtime shootout when a pack of trucks running four wide triggered an accident that froze the field. Lessard won in a Toyota for Kyle Busch Motorsports in the first win of the season for the organization from a driver other than Busch.

“I needed that, we had a tough season and this one feels very good,” said Lessard, who did not make the playoffs and had just four top-10 finishes before the Talladega win.

Lessard is the fifth foreign-born winner in the Truck Series. The teenager moved from Quebec to North Carolina in January, two months before the coronavirus pandemic upended his first full-time season in an American national series.

“I moved here in Mooresville in January, it’s a crazy year to be your first year moving from my home and my family is in Quebec,” Lessard said. “I needed this.”

The race was the first elimination race of the Truck Series playoffs and Christian Eckes, one of the contenders to race for the championship, was eliminated in a mixed day for Busch's race team. Lessard got the race win, but there will be no KBM championship this year.

Todd Gilliland was also eliminated because a mechanical failure ended his race early. Gilliland had been aggressive prior to the the mechanical issue in a bid to extend his playoff run.

Kaz Grala finished seventh as the replacement driver for Natalie Decker, who missed her second consecutive race. She fell ill shortly before last week's race at Las Vegas and was a late scratch. Decker also missed a race in June when she was hospitalized with complications related to gallbladder surgery.