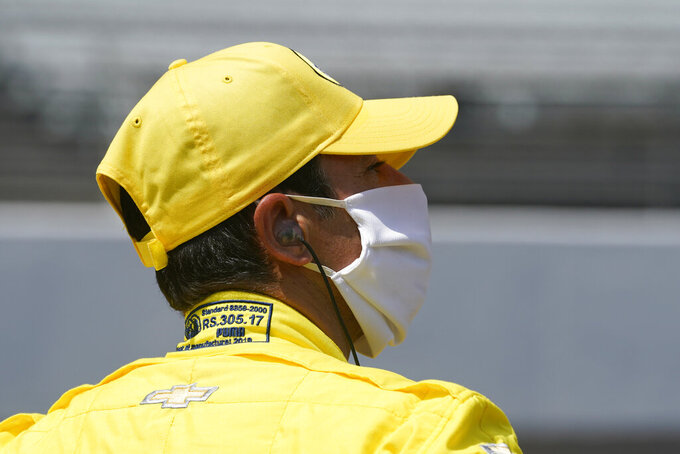 INDIANAPOLIS (AP) — One by one, Roger Penske's four drivers took their shots during Indianapolis 500 qualifying Saturday.

Each time, they returned frustrated or flummoxed, futilely searching for answers.

And when the gun finally sounded, the most successful team in race history found itself shut out of Indy's nine-car pole shootout for the first time since the format debuted in 2010. It's also the first time Team Penske hasn't had a car start in the first three rows since 2002.

“Not a chance, not a chance," Will Power said disgustedly after posting a four-lap average of 229.701 on his four-lap run. “One of the slowest cars ever. We ran less down force than Josef (Newgarden) and it was slower. So that’s it, man, that’s what we’ve got. At least we can focus on the race now."

But unlike 25 years ago, when Al Unser Jr. and Emerson Fittipaldi did not qualify for the race, this was not just Penske's problem.

The Chevrolet-powered cars struggled all day, with Honda engines claiming the top five seeds and eight of nine shootout spots. Marco Andretti had the fastest car at 231.351.

Rinus Veeky, the 19-year-old Dutch rookie, was the only driver standing in the way of a Honda sweep. He was sixth at 231.114.

“It was my fastest lap ever at Indy," he said. “I haven’t done too many laps as a rookie, but I feel really happy. I had a good car at high speeds, so I already knew what the car was going to do. It just felt great and I didn’t have any problems at all."

That was a rarity for the Chevy drivers.

Tony Kanaan, the 2013 Indy winner, is starting 23rd, and JR Hildebrand, the 500 runner-up in 2011, qualified 32nd after avoiding the wall during his only attempt of the day. Two-time world champ Fernando Alonso never had a chance, either.

“I was happy with the run and I think it’s what we have at the moment," the Spaniard said after qualifying 20th at 228.768 in his Chevy. “We knew this morning or maybe yesterday, we were not going to be real good with the boost. So we said let's focus on the race car.""

The obstacles for Penske's team kept getting worse.

“Obviously, we are working on it," Castroneves said after making the first of three qualifying runs. “We've got to see if we can find something, just to find it. However it’s going to take at least two to 2 1/2 hours to cool down this car to see if that’s possible. We’re going to try. Otherwise, we have a very good car for the race.”

Things went so poorly, Newgarden and Power were back in line when Hildebrand, the last driver to make an attempt, finished his run.

When that didn't work, Team Penske returned to its garage where crew members and engineers watched television coverage, looking for a glimmer of hope.

That moment came when points leader and 2008 Indy winner Scott Dixon improved his morning time during a mid-afternoon run, sending he Penske crew back back to pit road. They tried everything, at one point even attempting to time a run under cloud cover.

Castroneves told NBC he finally figured out what was wrong on his ensuing run. But in a seemingly fitting conclusion to the day, Castroneves was still in line when time exprired.

“At least we can focus on the race now," Power said. “We'll work on the race car and then we’ll see.”