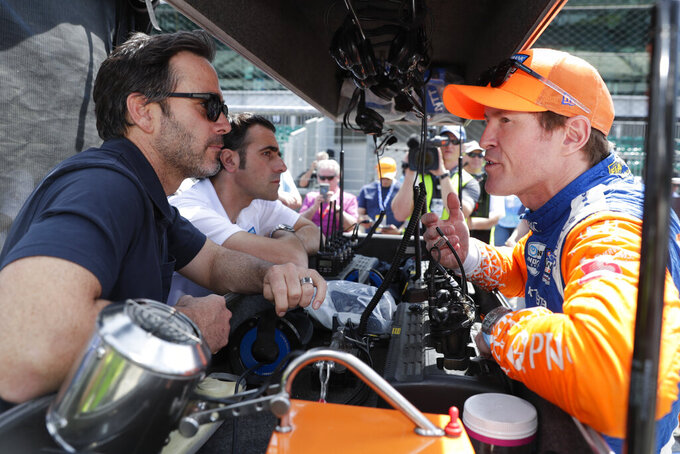 FILE - NASCAR driver Jimmie Johnson, left, and Indycar driver Scott Dixon, right, talk during practice for the Indianapolis 500 IndyCar auto race at Indianapolis Motor Speedway in Indianapolis, in this May 16, 2019, file photo. Johnson and Dixon will be competing in the Rolex 24 at Daytona endurance race that begins next Saturday, Jan. 29, 2022, at 1:30m p.m. ET. (AP Photo/Michael Conroy, File)

DAYTONA BEACH, Fla. (AP) — Jimmie Johnson does not care what you think about his career, his midlife racing crisis or his performance. He has been promoted from rookie, shed his status as a part-time driver and added the Indianapolis 500 to his list of challenges.

After an underwhelming debut season in IndyCar — expectations set unrealistically high based on Johnson's seven NASCAR championships and 83 Cup Series victories — his critics took aim at the vanity project that led to his shocking change of lanes.

“It seems many people say I’ve lost it and not cut out to drive a race car anymore,” Johnson said last week. “Thankfully, I’m thick-skinned after years of experience, and I don’t care... (competing in IndyCar) isn’t about anyone else but myself.

"What I’m doing now, I feel so free. It’s odd because it’s very much like my teenage years where I was just racing because I wanted to race. I’m doing it my way and doing what the heck I want to do.”

First up in his second season of freedom is this weekend's Rolex 24 at Daytona, one of the most prestigious endurance races in the world. It will be Johnson's ninth attempt to win the coveted trophy: a custom Rolex Oyster Perpetual Cosmograph Daytona watch.

It's Johnson's second consecutive year competing for Action Express Racing, which last year won the IMSA championship with its full-time car. Johnson drives the No. 48 in a partnership between Action Express, a team owned by NASCAR chairman Jim France, and Hendrick Motorsports, where Johnson spent his entire two decades of Cup racing.

The car is funded by Ally, his last sponsor in NASCAR, and the lineup is built to win. Johnson this year is again joined by two-time Rolex winner Kamui Kobayashi and Mike Rockenfeller, a former winner at Le Mans, Daytona, Sebring, and Spa. New to the No. 48 is Jose Maria Lopez, who joined World Endurance Championship teammate Kobayashi to put the reigning WEC champions on Johnson's team.

The No. 48 finished second a year ago and Johnson arrived at Daytona hoping “to finally stand on that top box for that race.” He logged plenty of track time this past weekend, including a night session in damp, cold conditions in which Johnson turned his fastest lap ever on the Daytona road course.

He was behind the wheel of the Cadillac on Sunday for the qualifying race, starting fourth and turning it over to Kobayashi in second. The No. 48 finished third, where it will start the twice-round-the-clock endurance race Saturday.

Johnson called it another opportunity to learn.

He drove 3 hours, 48 minutes in last year's race — three hours less driving time than Kobayashi and Simon Pagenaud got in the Cadillac — but logged three more sports car races after the Rolex and is admittedly much more comfortable now.

Same goes for IndyCar, whose season opener is Feb. 27. Johnson is just one of a dozen series regulars using the Rolex to find an early rhythm before the earliest start for the series since 2003.

His rookie season results were underwhelming on paper, with back-to-back 17th-place finishes his best showings over 12 races. But the data show his performance did improve as he adapted to a new car, a new formula and new tracks. Most of his competition has been driving Indy-style cars their entire lives, but Johnson had to unlearn habits developed over more than two decades of driving heavier stock cars and almost exclusively on ovals.

“I spent last year just trying to hitch my trailer to the back of the pack and keep up with everyone, and I was finally doing that at the end,” Johnson said.

He skipped the ovals in IndyCar and Tony Kanaan drove the No. 48 in those four events last year, but Johnson in 2022 has committed to the entire schedule and will attempt to qualify for his first Indy 500 in May. Kanaan will only drive the Indy 500 in a fifth car for Chip Ganassi Racing.

Johnson has tested at both Texas and Indy and is excited to see if he can wheel an Indy car around the familiar circuits. He has a combined 53 Cup starts at those two tracks and 11 victories.

“I feel like I’ll be much more competitive on the ovals, and the faster I can learn the cars and sensations and adjustments, the better my chances will be at a podium," Johnson said. "I certainly hope from a driving experience that I’m able to stop thinking so much and just start reacting and driving.

“I know how much of a difference that made for me on the street and road courses over the course of the year, and I’m hopeful I get on an oval and that I’m more worried about going forward than I am sensing and feeling and paying attention to all the little details.”

After this season, who knows? Johnson originally signed a two-year deal with Ganassi but doesn't sound like a driver nearing the end of his career. He cited Mario Andretti as his model.

“The more reps I get, the more years that I’m around, the better my performance will be,” Johnson said. "In a year or two of oval races, I might be able to be an IndyCar winner, and that would ultimately be the goal to pull that off. I feel like Chip is open to it. I know the team, other members of the team, everybody would be really excited to have me back another year.