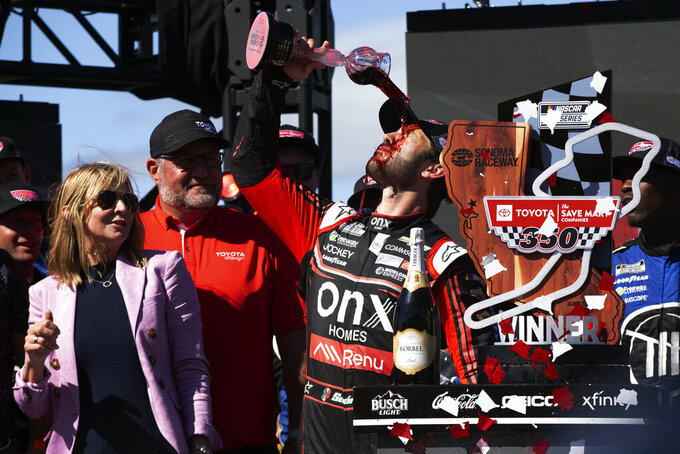 CHARLOTTE, N.C. (AP) — It was just one year ago that an aggravated Justin Marks sat at the podium at Nashville Superspeedway. Two days earlier, he'd claimed he was blindsided to learn he was once again shut out of the sale of two NASCAR charters.

He sat alongside Trackhouse Racing partner Pitbull, who ever the entertainer plugged his upcoming “I Don’t Know About You But I Feel Good” tour. The Grammy winner did feel good: Nashville was buzzing over the long-awaited return of NASCAR and people were partying all over the city — proof to Pitbull that he was amidst a post-pandemic renaissance.

That charter stuff with the NASCAR team? No worries to Pitbull. He lets Marks handle the business, while Pitbull helps raise the energy around the hip new team.

Well, Marks did figure it out. One year later, wow, does Trackhouse feel good.

The second-year team returns to its pseudo-home hot off Daniel Suarez's first career victory. Only the fifth Cup Series winner born outside the United States, the Mexican sent Trackhouse into the only off weekend on NASCAR's 38-race schedule with both Suarez and Ross Chastain already qualified for the playoffs.

See, when Marks last June lost out on those charters — Spire Motorsports sold them to someone else — he grew weary of playing the game and pulled off the purchase of his life. He bought the entirety of Chip Ganassi's NASCAR operations last July and landed himself not one but two charters and an organization with two decades of experience.

The team's emergence has centered on two underdog drivers who clawed their way into NASCAR's top series, then spent years searching for a team that believed they could win races.

At the end of the 2020 season, Marks picked Suarez, who was with his third different team in three years.

Marks saw potential and built Trackhouse around Suarez and Travis Mack, a crew chief who noted last week that he had been fired during the NASCAR off-week four years ago. Now he was vacationing as a first-time winner.

So much has changed for one team in one calendar year, and Suarez is expected to announce a contract extension ahead of Sunday's race.

Marks still hopes to be Nashville's hometown NASCAR team; his initial plan was to have Trackhouse operating out of a downtown tourist spot by 2023. Purchasing the turnkey Ganassi operation changed the plan.

Location doesn't so much matter to what Marks and Pitbull are trying to build. Trackhouse races Sunday with Tootsie's Orchid Lounge again sponsoring Suarez's No. 99 Chevrolet in a strong partnership between a famed Nashville establishment and a rising sports and entertainment entity.

Jockey's, meanwhile, will debut on Chastain's car for the first of six races as Trackhouse continues to add marketing partners to its portfolio and look for creative opportunities to showcase its team. Trackhouse will host an hour of live pit stops on Thursday in front of Tootsie's.

“Trackhouse is more than a racing team,” Marks explained. "It’s a brand where we’re trying to inspire, we’re trying to activate in the intersection point between entertainment and motorsports. It’s very much still in the business development strategy to have a brick-and-mortar presence in Nashville. It’s a matter of figuring out how that looks with our goals scaling as a race team.

“Nashville is so important to us. I think we’ve got some momentum in getting something special going there.”