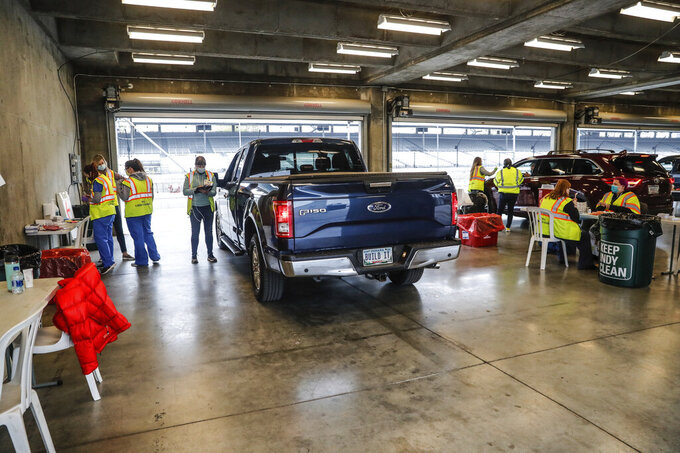 It's pretty spacious inside Indianapolis Motor Speedway, a sprawling national landmark of 300 acres that can fit Vatican City, Yankee Stadium, the White House, Liberty Island, the Taj Majal, the Roman Colosseum, Churchill Downs and the Rose Bowl inside.

All at the same time.

The plan calls to put 135,000 fans in there next month for the Indianapolis 500. During a pandemic. A number that screams too many! Too reckless!

But the speedway is not your average place. She's a behemoth along Georgetown Road and 16th Street, the largest sporting venue in the world. On a typical race day, there can be 400,000 people on the grounds for “The Greatest Spectacle in Racing.”

Roger Penske will have to settle for 135,000 this May 30, the 105th running of the race, and that's still a whole lot better than last year when he held the first ever Indy 500 without any spectators. State and local health officials said 40% attendance and Penske and the folks at IMS smiled and said thank you.

They had to be disappointed because they knew they could do more, even if 135,000 spectators will be the largest sporting event in the world since the start of the pandemic. The counterargument is that Penske, owner of the speedway only since January 2020, could have handled a larger crowd based on the size of the facility and the prep work done to build a safe event.

“I certainly think a facility like Indianapolis can handle a lot more than that. We're not talking about a basketball stadium — we're outside,” said Bobby Rahal, owner of Takuma Sato's winning car last year. “And how big is the speedway? You have pictures of things you can put inside. Vatican City! It's huge."

Sports crowds are beginning to come back and 78,113 turned out Sunday for an Australian Rules football match in Melbourne that now stands as the largest crowd since the pandemic hit last year. IndyCar has had back-to-back sellouts to open the season, but both races capped attendance at 20,000 fans.

"Look, you always want more,” Penske told The Associated Press of the 135,000 for the 500. But no matter how many come through the gate, his objectives are unchanged.

“We'll move heaven and earth to make sure our guests get what they expect and live up to the commitment we've made,” Penske said. “We can always have another race, but we need to have this one be successful.”

The grandstands will be socially distanced and 100,000 seats will sit empty. Suites won't be filled to capacity and the infield will be closed. Same for the viewing mounds. All concerts have been canceled and so have the the pit stop competition and all the hoopla that leads into the race.

The priority has been vaccinations both in the IndyCar Series and the state of Indiana. Penske wants the business of motorsports to return to some semblance of normalcy and that means customers back inside the garage.

To get into the garage at Indy, access will only be granted to those fully vaccinated against COVID-19 or those who test negative for the coronavirus each day at the track. It could take a few hours to get through the testing line each day.

The AP during this last race weekend at St. Petersburg, Florida asked 15 of the 24 drivers in the field if they'd started the vaccination process. Only one of the 15 asked had not and another, Romain Grosjean, said he was an hour away from his scheduled first shot when asked. Seven-time NASCAR champion Jimmie Johnson, four-time IndyCar champion Sebastien Bourdais and Sunday's 21-year-old race winner, Colton Herta, all said they were fully vaccinated.

Rahal and fellow team owner Chip Ganassi both said they personally urged their organizations to be vaccinated and both estimated more than 90% of their team personnel had started the process.

Alexander Rossi was not able to get his shot with his team at IMS and returned to the track later as a regular citizen during one of the 16 days in April the speedway has been open to the public as a mass vaccination clinic.

“I honestly went into it thinking it was going to be (terrible) and it was one of the most enjoyable medical systematic things I've ever done,” Rossi said.

IMS estimates 100,000 people will have been vaccinated through its mass clinics and 60% of the crowd will have been on race day. There will be opportunities to be vaccinated at the speedway on select days the track is open before the race.

“We should lead this, you follow me?” Penske said. “You come to Indianapolis, the biggest race in the world, we should be leaders. We are trying to be sensible and provide a product that shows we are concerned about people's health and also shows people around the world that we can have an event and do it properly.”

NASCAR has decided not to require its competitors be vaccinated. Brad Keselowski, winner of Sunday's race at Talladega Superspeedway and one of Penske's drivers, recently expressed vaccine hesitancy. Penske said he'd discussed vaccinations in a call with his NASCAR drivers prior to Talladega.

Not jeopardizing the Indy 500 should be the only thing that matters in IndyCar, with Penske given the chance to show he can safely host the biggest sporting event at the largest facility. He would have liked a larger crowd and is confident IMS could have pulled it off.

“We've tried to remove as many barriers as we could remove, do everything we could possibly do to be good citizens, good community members, and help open things back up," Penske said.

This story has been corrected to show AP asked 24 drivers, not 22.