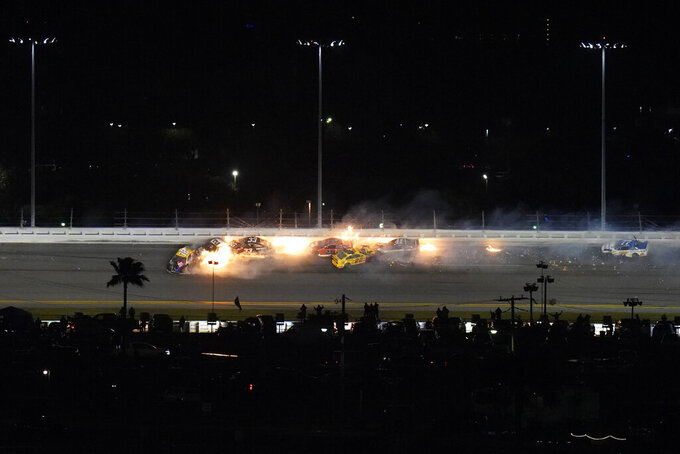 Racers crash during the last lap in the NASCAR Daytona 500 auto race at Daytona International Speedway, Monday, Feb. 15, 2021, in Daytona Beach, Fla. Among the driver involved were Kyle Busch (18); Brad Keselowski (2), who was in second before the crash; Joey Logano (22), who was leading; and Bubba Wallace (23). (AP Photo/Chris O'Meara)

DAYTONA BEACH, Fla. (AP) — Brad Keselowski stomped through the smoke-filled haze and eyed the destruction from another disastrous Daytona 500. His car had been sheared when it pinballed into the wall and then back into traffic after a go-for-broke run for the win that ended with Keselowski pacing in anger.

Keselowski took two steps and heaved his helmet at the carcass of his race car.

“My body is fine but my heart is broken,” Keselowski wrote on social media. He noted that “months of studying, months of tremendous car prep” and positioning himself to make a last-lap pass was still not enough to win his first Daytona 500.

This is NASCAR’s crown jewel event, the race that pays the most money and carries the most prestige. But after another fireball finish endangered drivers and ruined millions of dollars in race cars, it’s hard not to wonder if the carnage is worth all this effort.

It certainly was for journeyman Michael McDowell, a 100-1 underdog who slipped through the chaos for the first victory of his 13-year career. McDowell led for only a quarter of a lap at Daytona International Speedway and snapped a 357-race losing streak.

For his team, tiny Front Row Motorsports, it was just the third victory in 17 seasons.

So yes, victory validated McDowell, a well-respected racer who always may wonder what his career might have been if he’d had a shot driving top-notch equipment. But it won't change the race-to-race fortunes for Front Row, which plods along each season knowing it can't routinely slug it out with NASCAR's elite.

NASCAR drivers are taught to believe the Daytona 500 is the most important race in their world, but it's hard to find a recent scenario in which “The Great American Race” was a make or break for anyone.

The 500, of course, matters to Denny Hamlin, who has won it three times but has never captured a Cup Series championship. But did the 500 do much for Trevor Bayne? He was the last driver to pull off an upset, back in 2011, and he ran just three full Cup seasons after the Daytona 500 win.

So much time and energy dedicated to one single event — it is just one race out of 36 each year! The racing is completely different at almost every other track on the schedule! — and so little to show at the end.

NASCAR made it only 14 laps into the 63rd running of the race before early aggression wiped out 16 cars. The rain started minutes later and anyone who waited through a nearly six-hour delay was rewarded with mostly follow-the-leader racing until the early Monday finish.

Superspeedway strategy is one of survival. The goal is simply to be running still on the final lap, when everyone shows their cards and makes a play for the win.

Keselowski leapfrogged from 14th place to second over the closing 25 laps, then readied himself for the winning move. He stalked teammate Joey Logano down the backstretch and with a huge push from McDowell — his peers agree that McDowell was the strongest pusher at Daytona — Keselowski ducked underneath Logano while pulling all of McDowell's momentum with him.

Logano threw a block — some argue the defensive move was too late — and it wrecked both Team Penske cars. McDowell was able to charge through the crash scene, but eight other drivers could not.

The Daytona 500 then ended under caution because of a 10-car pileup.

Only 11 of the 40 cars made it across the finish line, yet the crowd still roared following a spectacular finish. It didn't seem to matter that drivers admitted they weren't truly racing for 400-plus miles.

“It’s hard to be that guy to stick your neck out,” Dillon said.

Cup champion Chase Elliott added: “Everybody was content to ride around the top until the very last second, and that’s what you saw."

Wrecks aren't required to ensure an entertaining race, but they are very much inevitable at superspeedways. It has made multi-car accidents expected, maybe even embraced since the imagery almost always finds its way into promotional material.

There's a bloodthirst for this kind of racing that can't really be denied because if demolition derbies weren't accepted, something would change. Be it the rules or the engine packages or even the mentality of the actual drivers, something would be adjusted if this wasn't status quo.

This Daytona 500 wasn't all that different from last year's, when Ryan Newman in yet another last-lap frenzy launched into a death-defying tumble down the track. He wasn't seriously injured, nor was anyone this time, and that seems to be the new benchmark for grading Daytona.

Entertaining? Sure. And those clips might even make some highlight shows.

But that wasn't good racing. It was instead a waste of time.