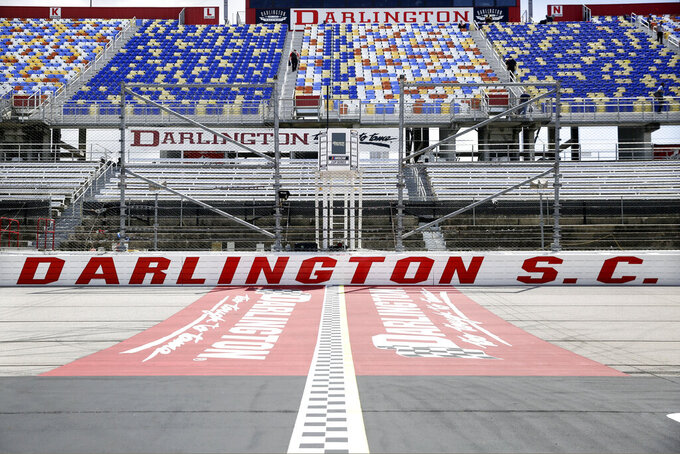 FILE - In this May 17, 2020, file photo, the grandstands are empty at Darlington Raceway before a NASCAR Cup Series auto race in Darlington, S.C. Darlington Raceway officials are excited about hosting the first of two scheduled NASCAR weekends, something the track hadn’t featured since 2004. (AP Photo/Brynn Anderson, File)

Darlington Raceway was strangely busy at the start of the pandemic when the old, country track opened its gates to help NASCAR restart its engines during a hectic stretch of three races in five days.

It was the perfect warmup for a return to two scheduled Cup Series races this season at NASCAR's oldest superspeedway for the first time since 2004.

Darlington hosts all three of NASCAR's national series this weekend that closes with the Cup stars celebrating Mother's Day on Sunday. NASCAR then returns in September for the Southern 500 on Labor Day weekend.

It is something of a rebirth for a track that seemed closer to extinction during the 17 years since NASCAR stripped the “Lady In Black” of one of its coveted race dates.

“We’re certainly excited with what’s occurred,” said Kerry Tharp, track president since 2016. “We consider ourselves like the Wrigley Field of NASCAR.”

The track hosted two NASCAR weekends a year from 1960 through 2004 before the Labor Day race was moved to a larger market.

It's not that Darlington wasn't appreciated. Harold Brasington carved the 1.366-mile, egg-shaped oval out of farmland and “The Track Too Tough To Tame” is one of the most unique on the circuit. But it opened in 1950, seats less than 50,000 in the grandstands and sits along a four-lane highway on the way to the beach.

But, track officials also took for granted Darlington’s status as a staple on NASCAR’s schedule and it led to neglect and disrepair at the raceway.

When Darlington lost its Labor Day weekend date after 2003, the whispers began about the track maybe shutting down. It's what happened to two other NASCAR originals: Rockingham and North Wilkesboro in North Carolina are now shuttered.

But Darlington leaders and officials at NASCAR, which now owns the track, have worked to modernize the venue by adding lights, new grandstands, suite areas and a tunnel entry to improve access for teams.

Tharp understands Darlington can’t make the same mistake again by sitting back content with its two races a year status. There are areas he and NASCAR are targeting for improvements.

The path back has been rocky. The first big step came in 2015 when Darlington regained its Labor Day date for the Southern 500. Track organizers also initiated a throwback weekend celebration at the Labor Day race six years ago.

The practice — think of it as Old Timer’s Day for NASCAR’s past — has become popular among fans as drivers and teams don vintage outfits and the cars are replicated in paint schemes that honoring the sport's history.

Chase Elliott, the reigning Cup champion and NASCAR's most popular driver, will be driving the same paint scheme the late Alan Kulwicki was the day Kulwicki beat Elliott's father for the 1992 Cup championship. Joey Logano will be in the colors from Mario Andretti's first Formula One victory in 1971. Bubba Wallace was inspired by Wendell Scott, the first Black driver to win at NASCAR's top level.

Going forward, the throwback celebration will take place during the Mother’s Day weekend race. The Southern 500, set for Sept. 5, will open NASCAR’s playoffs.

Tharp said the switch will help racers and teams concentrate fully on the postseason.

“It’s something that made sense to us,” he said.