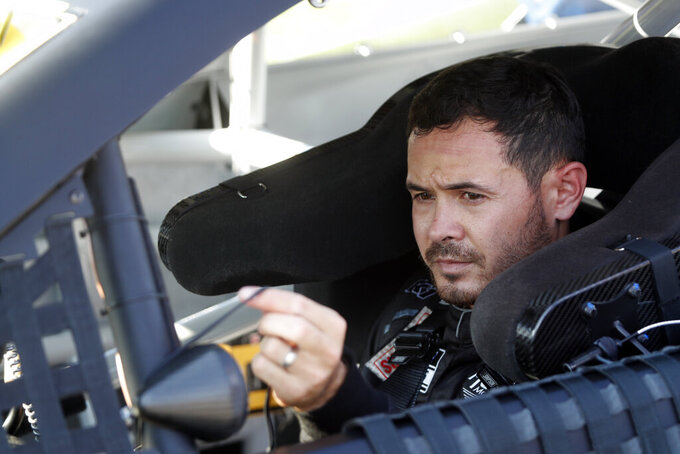 LAS VEGAS (AP) — Denny Hamlin will reach the third round of the NASCAR Cup Series playoffs next month having faced the make-or-break pressure of the postseason only twice.

Ending the first race of each postseason round in victory lane can do wonders for the blood pressure of a driver and his team, because every winner clinches a spot in the following round.

Hamlin won three weeks ago at Darlington to open the playoffs, and then he did it again Sunday night at Las Vegas in the second-round opener. He is the first driver to win the first race in each of the first two rounds since NASCAR introduced this playoff format in 2014.

“I’m so happy to not have to worry about the next two weeks,” he said.

Sunday's victory was Hamlin's first in Vegas, the 46th of his career — and arguably one of his most important, if it helps him to stay on course for title contention.

“It’s just such an advantage to win any race in the playoffs, but certainly the first race of any round,” said Chris Gabehart, Hamlin’s crew chief. “Especially this (second) round. You look at Talladega and Charlotte — you can’t stress enough. Every one of these race teams are professional, so they deal with the stress and the pressure. They handle it. But it’s there. It exists. You can’t look past it. It’s real. We’ve only had to deal with that for what will be two of the first six races of the playoffs.”

Tension is running high in other areas of the paddock, and not strictly because of the playoff pressure.

Kevin Harvick is still upset with defending champion Chase Elliott after their conflict at Bristol last weekend. Before Sunday's race in Vegas, Harvick compared his dialogue with Elliott to a conversation with his own 9-year-old son, Keelan.

“I don’t know if I’ve ever been that mad,” said Harvick, who is no stranger to on-track anger. “That was probably the maddest I’ve ever been.”

Harvick asserted the race at Bristol had been manipulated by Elliott's tactics to slow him down. Harvick didn't explicitly vow retribution, but said: "That stuff all comes full circle in this deal and has a funny way of teaching you.”

Harvick wasn't in position for any revenge in Vegas, finishing ninth while Elliott came in second. Elliott had a shot to catch Hamlin on the final 10 laps but couldn't quite close the gap with a driver on a major roll.

The next time Hamlin's future will be on the line is Oct. 17 at Texas in the opening race of the third round. In a way, he’s already more than halfway to the long-anticipated first championship of his 17-year career if he can keep up this remarkable success.

He's not relaxing in the interim — he even debated skipping any post-victory partying in Vegas because he wanted to get back to Charlotte in time to get his daughters from school on Monday. But when he lines up next week at Talladega, Hamlin will race free and easy.

“From my standpoint, it’s a free pass to go there and try to lead every lap (and) win the race,” Hamlin said.

Hamlin and his Joe Gibbs Racing crew intend to make the most of their opportunity as they close in on the chance to race for Hamlin's long-sought, never-achieved first championship. They will use the weekends at Talladega and the Charlotte Roval to stay sharp and to make adjustments for the dwindling races that still count.

“Listen, I’m still professional,” Hamlin said. “I still want to go out there and win the next two weeks. There is no reason for us to take any weeks off. We don’t take any weeks off. .. We’ve been in playoff mode for quite a while now. I’m more looking forward to it now than worrying about all the what-ifs of what can happen that can take you out. During the course of my career, I’ve had just about all the what-ifs actually happen. It’s good to know we’ve got nothing to lose at this point.”

Everyone involved also understands the capricious nature of a NASCAR playoff title. Several months of hard work and steady improvements can put a driver in a strong position, but it can all be undone in one race, particularly at the end.

Yet Hamlin is clearly peaking at the right time. The victory in Darlington was his first of the year, and he still racked up a second-place and ninth-place finish before his second win at Vegas. Hamlin has an impressive 21 top-10 finishes this season.

“Certainly our team has been really capable all year long,” Gabehart said. “Every metric other than the win column has been astounding for our team. It’s really been our best year together thus far. You stay up front as much as we have, the wins are going to finally come.

"They’re coming at the right time.”