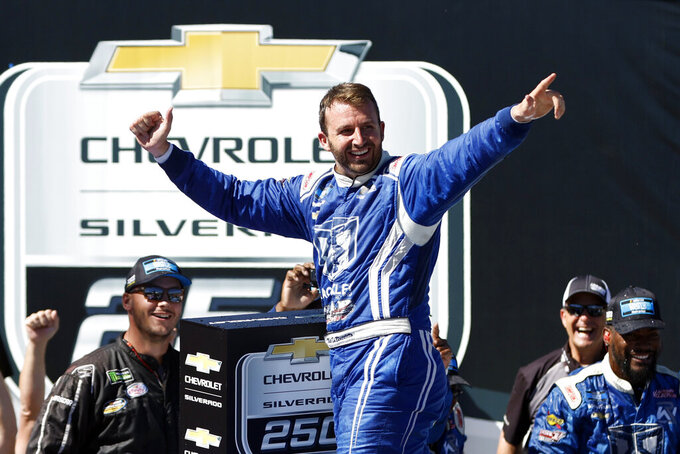 TALLADEGA, Ala. (AP) — Matt DiBenedetto was named winner of the Truck Series race Saturday at Talladega Superspeedway after a lengthy review by NASCAR officials of the finishing order.

DiBenedetto and Alabama native Bret Holmes both waited inside their trucks, parked side-by-side, as NASCAR reviewed its data.

The race went to overtime and there were several lead swaps over the two-lap shootout finish. But then a crash in the middle of the pack as the leaders were headed to the checkered flag caused NASCAR to throw the caution.

Holmes in the outside lane seemed to be the first driver to the finish line by inches over DiBenedetto on the bottom. But NASCAR reverted back to who was the leader when the caution flag waved — seconds before the drivers reached the checkered flag.

It was the first national series victory for DiBenedetto, a journeyman who lost his Cup seat and alliance with Team Penske at the end of last season and dropped down to the Truck Series to remain employed.

DiBenedetto, in a Chevrolet, led only one lap — the last one. It's the first lap he's led in 21 Truck Series races.

Earlier in the race, Jordan Anderson was airlifted to a Birmingham hospital with second-degree burns suffered in a crash. He said the burns were across his neck, face, right arm and both knees.

Anderson’s truck was spinning across the track when flames began shooting from underneath the Chevrolet. The truck continued to spin and slide toward an interior wall and Anderson appeared to be halfway out of the window trying to flee the moving, burning truck, when the truck came to a rest aligned with the wall.

Anderson scrambled to the top of the wall and away from the flames. He was initially seen in the infield care center and then airlifted out of the track. It was the fifth start of the season for Anderson, a 31-year-old journeyman in NASCAR’s lower level national series.

It was the fifth start of the season for Anderson, who posted on social media he expected to be released from the hospital later Saturday.

“Scariest moment of my racing career by far,” Anderson wrote. “Doctors say everything should be healing up within a few weeks.”