Don't count Montoya out, he's only at Indianapolis to win 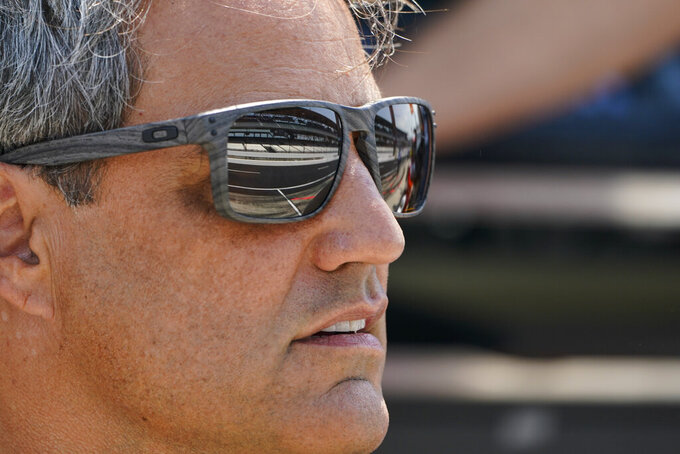 Juan Pablo Montoya, of Colombia, watches from the pit area during practice for the IndyCar auto race at Indianapolis Motor Speedway in Indianapolis, Friday, May 20, 2022. (AP Photo/Michael Conroy)

That's what they say about Juan Pablo Montoya when he doesn't want to do something, pushes back on a request or simply pretends he can't hear what he's been asked.

He is back at Indianapolis Motor Speedway for what might be the last time as a driver. He turns 47 in September and is focused on helping develop his son's career.

So when Montoya turned only two laps in 41 mph winds on “Fast Friday," and when he lagged behind in practice sessions or logged a disappointing qualifying run, some of his competitors wondered if the Colombian even wants to be in the race.

All of a sudden “that's just Juan” started shifting to “Juan's checked out."

Asked by The Associated Press about fellow competitors assuming Montoya's not putting forth full effort at Indianapolis, he stared silently out the window of the Chevrolet Camaro shuttling him from an appearance.

“Good for them,” he finally replied. And that was it.

Montoya is an enigma — always has been over a career spanning three-plus decades — in that he does what he wants when he wants. He's blunt, hard-headed and once was considered one of the best drivers in the world.

Like that time he showed up at the Indy 500 as a rookie in 2000 and led all but 33 of the 200 laps for the win. Or, just weeks later in the CART race at Michigan, when Montoya went wheel-to-wheel with Michael Andretti over nearly a dozen closing laps to win what's considered one of the greatest duels in American open-wheel history.

Montoya moved to Formula One the next season and in just his third race won a game of chicken with Michael Schumacher. Montoya refused to lift while racing for the lead, stubbornness that ran Schumacher off course.

Montoya collected seven F1 victories, winning at Monza, Monaco and Silverstone, before he tired of the politics and called Chip Ganassi to see if there were any seats for him in the United States. Ganassi said sure, come to NASCAR, and Montoya did that for seven seasons and a pair of Cup Series wins.

Then it was back to IndyCar and a return to Indianapolis Motor Speedway for the first time in 14 years. Montoya finished fifth in his second Indy 500.

The next year? Montoya won in 2015 for his second Indy 500 victory in three career starts.

Montoya's Indy 500 stat line is unreal: two wins in six starts and only one finish below ninth; he did not finish in 2016 when he was involved in a crash.

Taylor Kiel, president of the Arrow team, said Montoya is “absolutely” engaged and brings a breadth of knowledge and experience to an otherwise inexperienced Indianapolis lineup of Pato O'Ward and Felix Rosenqvist.

“I find Juan to be an additive to our program in a lot of ways, and he certainly has got a lot of experience. His resume speaks for itself,” Kiel said Friday. "But what he provides for us is an opinion and a perspective that is fresh. He comes to this team for a month and he's able to give us a snapshot of where he thinks we are at, I think that is important.

“He is capable of winning this race from any starting position, and he's correct: The race is Sunday and I've got full confidence that's he'll move forward like he did last year.”

So if Montoya doesn't think he needs to turn lap after lap at Indy to prepare for race day, he's going to tell Arrow McLaren SP that the race is not until Sunday and he's not risking his car. Montoya will drive for Arrow for a second consecutive year after finishing ninth last year. He is admittedly smarter, calmer and more calculated than he was at his heyday.

“I'm good. I don't need to pretend. The window where this car works is very small, and it's very hard to figure out,” Montoya told AP. “I am the third driver on this team, I have the third car. If I wreck it before the race, then the fourth car I know is not going to be as good as the one I have now.

He still carries himself with the same confidence he had as a fearless 23-year-old new to American open-wheel racing. The only time he softens is when talking about his 17-year-old son, Sebastian, who will be racing in Monaco this weekend as Montoya makes what could be his final Indy 500 start.

Asked if he's still got the same desire, Montoya replied: “Did you watch Mid-Ohio last week?”

Indeed, he traveled from the road course race at Indianapolis on Saturday night two weeks ago to Ohio the next day to run an IMSA sports car event. Montoya rallied from a penalty to earn the class victory.

Montoya starts 30th on Sunday, his lowest ever in the Indy 500. He will have to pass an awful lot of cars to win a third Borg-Warner trophy, but he cautions anyone counting him out.

“I've never been a big believer of riding a really high wave and thinking ‘I’m the best.' No, I just drive as hard as I can and do the best I can," Montoya said. “You've got to remember, I am 46 and racing kids who are like 22. The kids who are 22 feel like they are invincible and they don't get the bigger picture. The bigger picture is you need to be able to take care of your car for 500 miles to have any chance to win.”

Will he be back again?

Montoya shrugs. He doesn't see any scenario in which he races against his son in the Indy 500 — the two were sports car teammates at Sebring earlier this year — but he doesn't know what's next.

“I won't come back and run Indy just to run Indy,” Montoya said. “It has to be with a team that wants to win. If McLaren wants me to do it again, then I will do it again because I like this team and I won't come here if I don't believe I can win the race.”