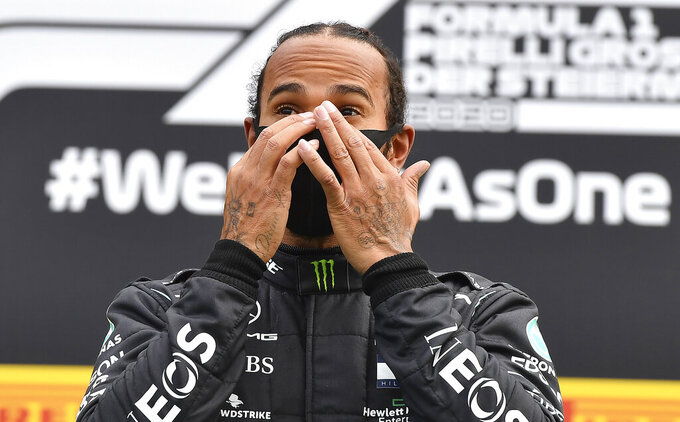 Mercedes driver Lewis Hamilton of Britain celebrates on the podium after winning the Styrian Formula One Grand Prix at the Red Bull Ring racetrack in Spielberg, Austria, Sunday, July 12, 2020. (Joe Klamar/Pool via AP) 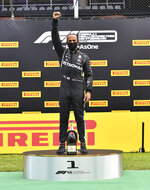 SPIELBERG, Austria (AP) — Standing on the podium to celebrate his latest win, Formula One world champion Lewis Hamilton raised a clenched right fist and then delivered a message to his fellow drivers not to slow down in the fight against racism.

It's 52 years since American sprinters Tommie Smith and John Carlos introduced that powerfully defiant gesture to a worldwide TV audience when standing on the podium during their medal ceremony at the 1968 Olympics in Mexico City.

On Sunday Hamilton and the other 19 F1 drivers wore black T-shirts with “End Racism” on them, as they had done at last weekend's season-opening Austrian GP.

Most again took the knee on the grid before Sunday's Styrian Grand Prix in Austria.

Others still did not and even questioned in the pre-race drivers' briefing whether it should still be done.

“Some people were asking ‘How long do we have to continue to do this?’ Some felt like one was enough last week, and I just had to (tell) them that racism is going to be here for probably longer than our time here,” Hamilton said after winning his 85th F1 race. “People of color who are subject to racism don't have time to (just) ‘take a moment’ to protest and that be it. We've got to continue to push for equality and raise awareness for it.”

Smith and Carlos were representing a country being torn apart, after the assassinations of Martin Luther King Jr. and Bobby Kennedy made '68 one of the most turbulent years in American history. Wearing black gloves, the sprinters raised their fists in solidarity while the Star-Spangled Banner played.

When Serena Williams won her seventh Wimbledon title in 2016, she proudly raised her fist in a Black Power salute at the All-England Club in 2016. That same year, former NFL quarterback Colin Kaepernick started taking a knee to raise awareness for black athlete activism. Williams and Hamilton have both referenced the Black Lives Matter movement, which Hamilton wore on the front of his T-shirt on Sunday.

Hamilton has spoken out against racism since the death in May of George Floyd — a handcuffed and unarmed Black man — after a police officer pressed his knee on Floyd’s neck for nearly eight minutes in May. Hamilton attended a Black Lives Matter march in London and is setting up a commission to increase diversity in motorsport.

His Mercedes teammate Valtteri Bottas kneeled after winning last Sunday's Austrian GP and the team has thrown its support behind Hamilton by racing in all-black cars for this season.

“As a team we’re keeping the black all year long, so we’re going to be fighting and pushing for it all year," the 35-year-old Hamilton said. "Personally it’s going to be a lifelong thing for me.”

Hamilton called out teams last week for not doing enough to combat racism.

Although he also praised F1 chairman Chase Carey and governing body FIA for donating money to help promote more equality and diversity in F1, Hamilton clearly feels there is still a long way to go.