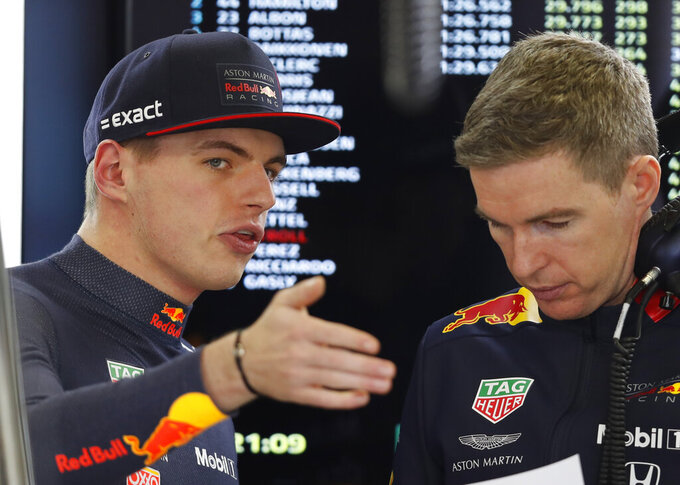 Red Bull driver Max Verstappen, of the Netherlands, talks to a member of his team during the final practice session for the Formula One Mexico Grand Prix auto race at the Hermanos Rodriguez racetrack in Mexico City, Saturday, Oct. 26, 2019. (AP Photo/Eduardo Verdugo) 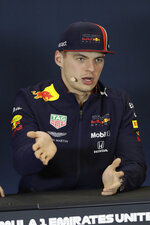 AUSTIN, Texas (AP) — Max Verstappen is happy to take all the space Lewis Hamilton will give him — in his head.

Verstappen fired back Thursday at the Mercedes driver's verbal jabs after the Mexican Grand Prix. He said Hamilton's suggestion to give the Red Bull driver as much space as possible to avoid getting hit on the race track were "disrespectful." Hamilton and Verstappen clashed when their cars bumped early in the opening lap in Mexico City last weekend. The contact caused Verstappen to drop from fourth to eighth and his chance of winning was ruined three laps later with a punctured tire when he touched Valtteri Bottas' car.

Hamilton went on to win and Verstappen finished sixth. After the race, Hamilton said smart drivers give Verstappen plenty of room because he's a "magnet" for contact. Ferrari's Sebastian Vettel, who has had his own clashes with Verstappen, agreed.

"From my side, it was a bit of a silly comment to make," Verstappen said ahead of the U.S. Grand Prix. "I think I'm always a hard racer, but fair. I think it's just not correct. But it's easy to have a dig at someone. I don't need to dig into other people in a press conference. I think it's a bit disrespectful, and I prefer to fight on track, which I love to do.

"From my side, it's fine," Verstappen said. "It's always positive when they talk about you because that means you're in their head."

"I was explaining the (race) scenario. No disrespect," Hamilton said.

Hamilton, 34, is chasing his sixth career F1 championship and can secure the title if he finishes no lower than eighth Sunday. Verstappen, who has eight career victories at age 22, including two this year, is fifth in the driver standings. Verstappen finished second at the U.S. Grand Prix last year.