Ferrari and Leclerc frustrated at lack of progress 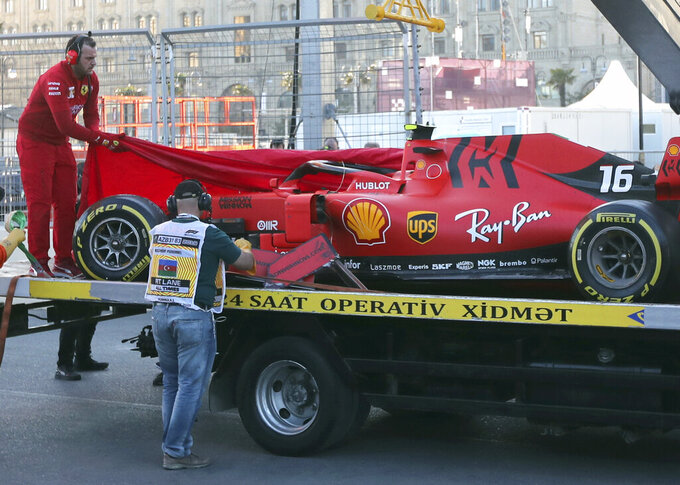 The car of Ferrari driver Charles Leclerc of Monaco is towed after he crashed during qualifying session at the Baku Formula One city circuit in Baku, Azerbaijan, Saturday, April 27, 2019. The Azerbaijan F1 Grand Prix race will be held on Sunday. (Zurab Kurtsikidze /Pool Photo via AP)

BAKU, Azerbaijan (AP) — Charles Leclerc and Ferrari can't understand why they keep finishing behind Mercedes, but they're not short of case studies.

The car upgrades Ferrari brought to Sunday's Azerbaijan Grand Prix weren't enough to lift Sebastian Vettel above third with Leclerc finishing fifth. The controversial team orders they had tried at the previous race in China — favoring Vettel over Leclerc — weren't enough either.

With Vettel and Leclerc now 35 and 40 points respectively off championship leader Valtteri Bottas, something has to change soon.

"We need to look at our weaknesses, try to address them. I'm pretty sure we've got plenty of data coming from this weekend," team principal Mattia Binotto said. Ferrari isn't as bad as the standings suggest, he argued.

"No win for Ferrari, four wins for Mercedes. No doubt that they are very strong and certainly they've got, let me say, a slightly better car," Binotto said. "But I think that the gap is not so big and the points, the results, are not reflecting the true potentials of the cars ... In the race today, yes, we were not as fast as them but we didn't finish 20 seconds behind."

Leclerc has often looked the closest Ferrari driver to challenging Mercedes' Bottas and Lewis Hamilton, even though he's never won a race and Vettel has four world titles.

On Saturday, Leclerc seemed the favorite for pole position before he crashed in qualifying. The Monaco driver started the race eighth but entertained with a string of early overtaking moves while Vettel struggled to keep up with Mercedes in third.

"At the moment, I'm not so unhappy with the car," Leclerc said. "We maybe need to work a little bit on our race. I think in quali the car felt amazing. In the race, a little bit more balance problems but small issues."

Leclerc came closest to a win in Bahrain last month when he led before an engine fault dropped him to third.

Hamilton is no stranger to one team dominating a season, whether in the era of Vettel's all-conquering Red Bulls or his all-Mercedes battles with Nico Rosberg.

Still, even he wants a stronger challenge from Ferrari.

"Hopefully at some stage Ferrari will be in the mix with us. I think this weekend, I do think they had the performance to be on the front row with both of their cars," Hamilton said. "It takes 100 percent to deliver throughout the weekend and I think we were as close to that as possible. They're going to have to pick it up if they want to fight us."