Former NASCAR champs Busch, Kenseth set to move on in 2019 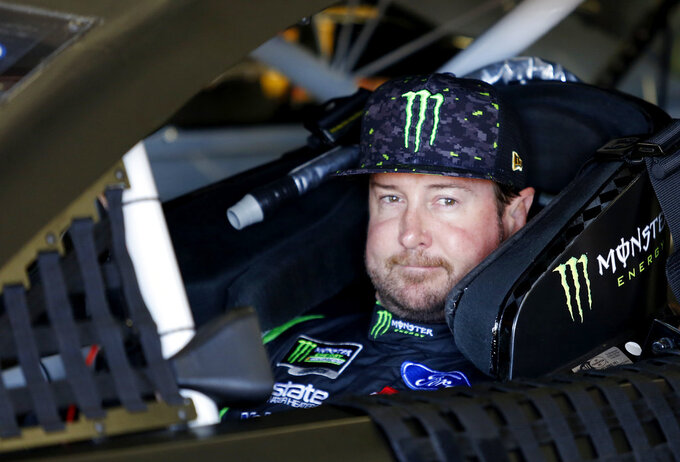 Former Cup champions Kurt Busch and Matt Kenseth, and Daniel Suarez, AJ Allmendinger, Regan Smith and Jamie McMurray are among the drivers certain to start next season with new teams or new roles.

Busch, the 2004 champion, is seemingly on his way out at Stewart-Haas Racing and his No. 41 Ford could be the landing spot for Suarez. Suarez, the 2016 Xfinity Series champion, was rushed to Cup to fill Carl Edwards' seat when he suddenly walked away from Joe Gibbs Racing. After two seasons and no wins, JGR cut ties with the 26-year-old Suarez. Suarez became expendable when Furniture Row Racing folded and 2017 champion Martin Truex Jr. suddenly became available.

"It's time to go somewhere else and try to win more races and championships," Suarez said.

"I don't know if it's going to be NASCAR," he said, chuckling.

Busch also played coy with his plans, though many believe he's a lock to take his Monster Energy sponsorship to Chip Ganassi Racing. Busch, knocked out of championship contention last week at Phoenix, would not say that Sunday's race at Homestead-Miami Speedway would be his last at SHR.

"I don't know. We'll see how things play out," Busch said. "There are still things that have to be sorted through on the team side, manufacturer side, sponsorship side."

Busch won six times since he joined SHR in 2014 — including the 2017 Daytona 500 — and signed a one-year extension with the team last December. He was wrecked late by Denny Hamlin last week at Phoenix to deny him a shot at racing Sunday for the title.

His consolation prize? Busch was invited by Monster to golf with Tiger Woods at a corporate function in the Bahamas.

"He goes, so what's your handicap? I go, my golf swing," Busch said.

Busch and Suarez will at least have rides in 2019. McMurray has lost his ride in the No. 1 Chevrolet and has been offered a leadership position with the team. McMurray has seven career victories in the Cup Series, including the 2010 Daytona 500. He has been with Ganassi since 2010. Ganassi also offered the 42-year-old McMurray a contract for the 2019 Daytona 500.

McMurray is interested in both opportunities, but he hasn't ruled out racing for another team next season.

"I would have loved to tell everybody what I think I'm going to do next year, but I just don't have it finalized yet, so I'm just going to kind of wait," he said. "Maybe use Instagram or Twitter as my source of revealing what I'm going to do."

McMurray has leaned on Kenseth, his closest friend in the garage, for advice on what retirement and open weekends would feel like. Kenseth was nudged out of NASCAR last season by Joe Gibbs Racing to make room for Erik Jones. He returned on a part-time basis this season with owner Jack Roush at Roush Fenway Racing in the No. 6 Ford. He's had just one top-10 finish in 14 stars — 2011 Daytona 500 champion Trevor Bayne made the other 21 starts — and Kenseth is set to head into retirement without much fanfare. Kenseth has 39 wins and was a two-time Daytona 500 champion (2009, 2012).

There's plenty of movement among the drivers who are usually in the rear of the fields.

Ryan Newman was released from Richard Childress Racing and will replace Kenseth/Bayne at Roush. Daniel Hemric, who is racing for the Xfinity Series championship, will replace Newman in the No. 31 Chevrolet.

Kasey Kahne took an early retirement because of illness and Smith filled in for the final 11 races for Leavine Family Racing. Matt DiBenedetto will drive the No. 95 Toyota for Leavine in 2019.

Allmendinger is looking for work after JTG Daugherty Racing decided to release him after this season. Ryan Preece, who made five Cup starts in 2015, will replace him.

Allmendinger posted a series of tweets Saturday night thanking everyone who supported him during his racing career.

"We wish we could go out on our own terms," he tweeted. "Not always do we get what we want. No regrets. Can't wait for what the future holds."