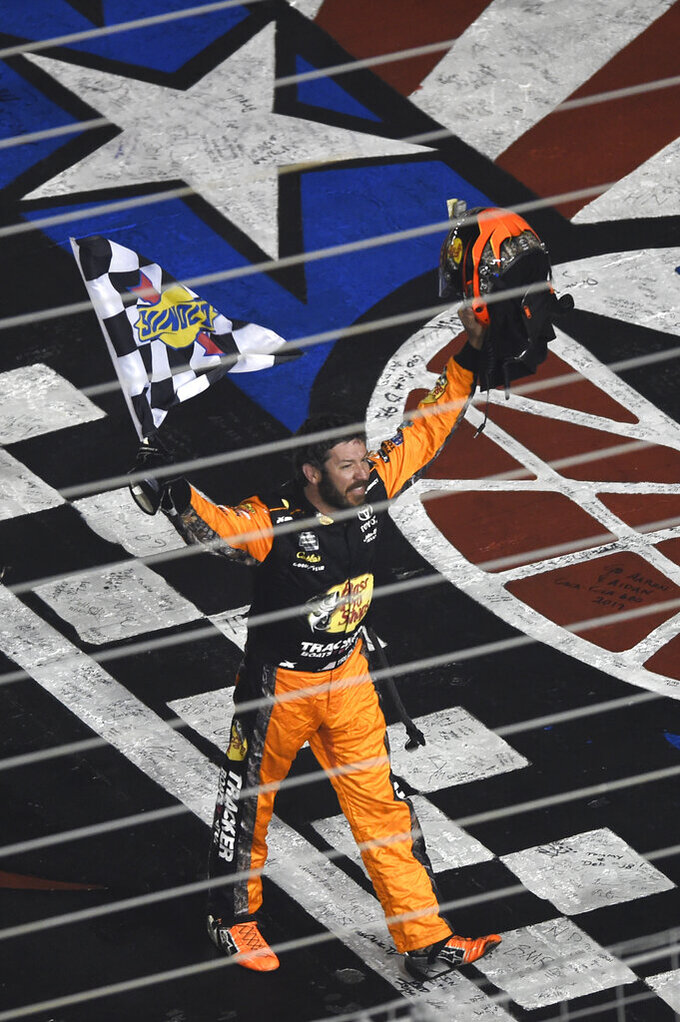 CONCORD, N.C. (AP) — Maybe it should be called the four-wide slide.

Whatever you want to name it, Martin Truex Jr.'s pass with four laps to go in the Coca-Cola 600 led to one of the best finishes in the 60-year history of the race — and injected some much-needed excitement back into NASCAR's longest and most grueling race.

"That was pretty wild," Truex said of his second crown jewel win in the past four years.

After a wreck that brought out of the caution flag with four laps remaining, Truex found himself on the inside of the second row alongside Kyle Busch for a restart.

Both had taken on four fresh tires.

In front of them were David Ragan, who didn't pit, and Ryan Newman, who took on two tires.

"I knew that whoever got out in front first with four tires was going to win the race," Truex said.

As the green flag dropped Busch split Ragan and Newman, drawing the three cars together. But as the trio started to sputter, Truex sensed his opportunity, yanking the wheel to the left and making a quick dive to the low side of the track. Suddenly it was a four-wide race for the next several seconds as the crowd at Charlotte Motor Speedway came to its feet.

Truex finally pulled ahead in turn three, cleared the pack in turn four and held on to win a race that included 30 lead changes, 15 cautions and lasted more than five hours. He said everything went about as well as it could on the pass and there was a good bit of luck involved.

"We could do that four more times and lose the race all four times," Truex said. "It's all in the way that you time it."

It was far different than his win in 2016, when he dominated the race by leading 392 of the 400 laps. When he blew a tire early in the race Sunday and hit the outside wall, Truex wondered if he'd be able to finish the race.

"It was way crazier tonight," Truex said. "In 2016, it was like lights out. Everything went perfectly and exactly the way we needed them to. Tonight was a challenge. I never thought until the second half of the race that we had a chance again. I have never hit the fence and won a race before, so that's pretty cool."

Crew chief Cole Pearn said if the tire had blown 20 feet earlier it would have sent the car through the fence and it would have been unrepairable.

Still, he said, "it was not good. We sustained quite a bit of damage."

Truex joked that the car looked like it had finished a race at Martinsville.

"When I saw that thing in victory lane, I'm like, dang, that thing is beat all to hell," Truex said.

Added Pearn: "Easily the wildest race we have ever won."

For car owner Joe Gibbs, the win proved to be added justification for his decision to bring on Truex this past year. Truex now has five straight top-five finishes with three wins, taking home the checkered flag at Richmond and Dover, too.

"It was a thrill for me to be a part of it," said Gibbs, who capped a special week in which he was elected to the NASCAR Hall of Fame. "It is a great time for us."