Gibbs brings Stewart and Labonte into NASCAR Hall of Fame 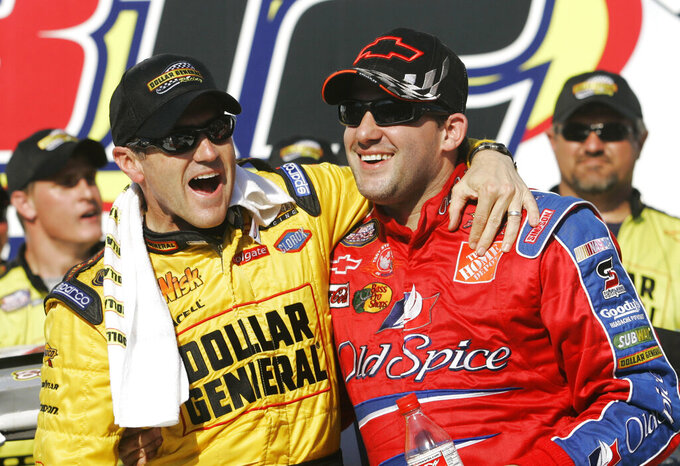 FILE - In this April 28, 2007, file photo, Bobby Labonte, left, and Tony Stewart, right, celebrate Labonte's win in the NASCAR Busch Series' Aaron's 312 auto race at Talladega Superspeedway in Talladega, Ala. Joe Gibbs, already an NFL Hall of Famer, will be inducted into the NASCAR Hall of Fame alongside Tony Stewart and Bobby Labonte, two drivers who helped him build one of NASCAR’s top teams while giving “Coach Joe” three of the organization’s five titles. (AP Photo/Rob Carr, File)

CHARLOTTE, N.C. (AP) — Joe Gibbs was still reeling from the death of his oldest son when he arrived at last year’s Daytona 500. Then, on a magical Sunday for his team, his drivers went 1-2-3 in the biggest race of the year to kick off a tribute season to the late J.D. Gibbs.

J.D. GIbbs died last January at age 49 from complications with a long battle with a degenerative neurological disease. Just a month later, the season began for Joe Gibbs Racing without its co-founder. But the loss was an inspiration all year for the organization, which won a modern-day record 19 of the 36 Cup Series races, a second Cup title for Kyle Busch and then saw Joe Gibbs elected to the NASCAR Hall of Fame.

Gibbs, already an NFL Hall of Famer, will be inducted Friday night alongside Tony Stewart and Bobby Labonte, two drivers who helped him build one of NASCAR’s top teams while combining to win three of the organization's five Cup titles.

“You couldn’t write a book and have this happen," Labonte said of the Gibbs trio's induction together. “I just sit back and reflect on the times with Joe and it’s awesome we’re all three going in at the same time. You just couldn’t ask for anything better than that."

Waddell Wilson and the late Buddy Baker round out the Hall of Fame's 2020 class of five.

Gibbs was a three-time Super Bowl winning coach of the Washington Redskins when he secured an $800,000 loan before the 1992 season to start a NASCAR team with his two sons. He landed Interstate Batteries as a sponsor — a backer that remains with JGR to this day — and hired Dale Jarrett to drive.

“He sat (us) down and said, ‘Look, I’ve borrowed $800,000 and that’s all I’m borrowing. If we can’t make this thing get up and going … I’ll shut this down and chalk it up to a bad investment. But hopefully we make it happen,'" said Jarrett, a Hall of Famer himself. "And he has built this 500-plus employee business up from literally 18 people that first year and an $800,000 loan. It’s just incredible."

Success seemed easy on the track, but Gibbs was kept busy. Among other things, Stewart had an explosive temper that led to meltdowns after poor races. Gibbs recently joked he'd run to the team hauler in an attempt to mitigate the damage if Stewart had a bad race.

Stewart never really mellowed, but used the tools he learned from Gibbs to leave in 2008 to become part owner of Stewart-Haas Racing. Although Stewart was a driver/owner through 2016, he does not believe he could have made the transition into ownership had he not grown up in the Gibbs organization.

Gibbs, who is 79, was inducted into the Pro Football Hall of Fame in 1996 for his success with the Redskins. An ardent supporter of his former team, he recently counseled Ron Rivera to take the head coaching job in Washington after Rivera was fired by the Carolina Panthers. Gibbs and Rivera were not particularly close, but when Rivera reached out, Gibbs cleared several hours in his schedule to sit and talk about the Redskins culture and working for owner Dan Snyder.

His drivers — he currently fields Cup entries for Busch, Martin Truex Jr., Erik Jones and Denny Hamlin, a two-time Daytona 500 winner discovered by the late J.D. Gibbs — marvel at his work ethic and commitment to the success of his teams.

“He's one of the first guys in the shop every day, and one of the last to leave,” Busch said. “If he's not working at the shop, he's traveling or flying somewhere to do something for the race teams. My phone rings late at night when I'm trying to sleep and it's Coach just checking in. It all starts with him, he's the one who drives the entire organization.”