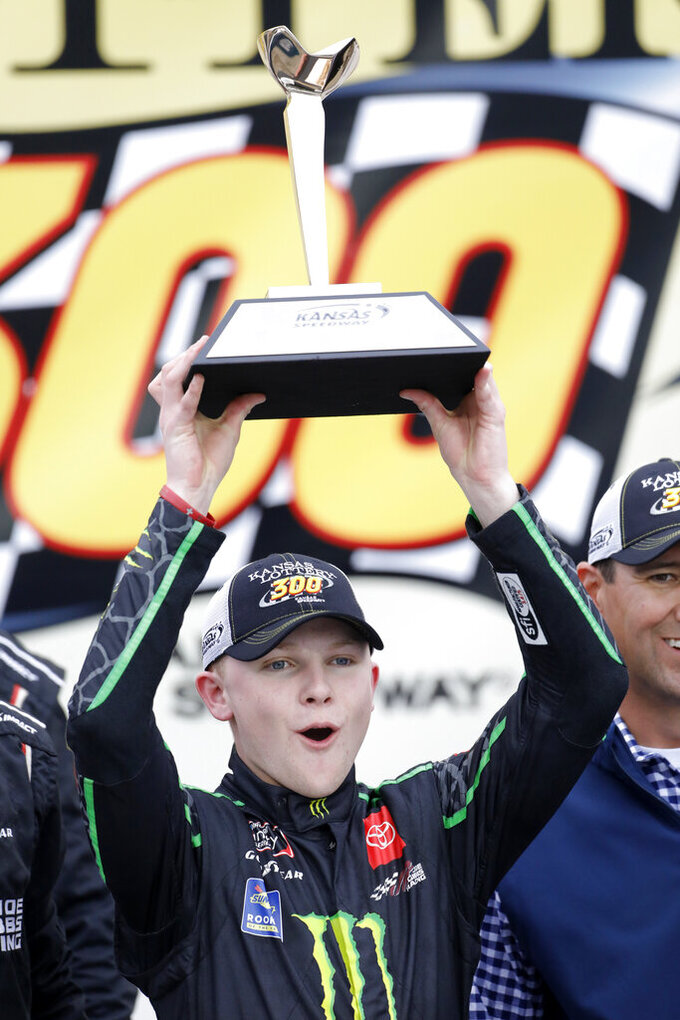 KANSAS CITY, Kan. (AP) — Ty Gibbs disrupted the Xfinity Series championship, then rushed off for the fuel he needed to run another race.

Gibbs picked up his fourth Xfinity victory of the season Saturday and stopped title contenders AJ Allmendinger, Austin Cindric and anyone else from advancing to the championship round. Gibbs isn't eligible for the Xfinity Series championship, so all four spots in the finale remained open headed into next week's race at Martinsville Speedway.

Gibbs didn't have much time to celebrate, though, because he had to start the ARCA Series race later Saturday at Kansas Speedway to clinch the championship.

“I’m probably going to have some peanut butter and honey sandwiches and some bananas and some Monster Energy to keep me awake,” Gibbs said.

The 19-year-old grandson of the Hall of Fame team owner, Gibbs will be in the Xfinity Series next season. For now, the Joe Gibbs Racing driver is just a roadblock for the finalists for the Nov. 6 championship finale.

Gibbs passed reigning champion Cindric with 10 laps remaining at Kansas to become the second non-playoff driver to win in this round of the Xfinity Series playoffs.

Cindric finished second and Allmendinger was third, and neither has clinched on points yet.

“I really would have loved to lock our way in and race for a win at Martinsville,” said Cindric, who didn't seem worried about advancing.

“I am more comfortable than anyone else can be, I guess. The good thing about Martinsville is it takes a lot to hit hard enough to get you out of the race. We probably just need to finish that one and we will be in the show.”

A non-playoff driver again was a factor in the finish of playoff drivers. This time it was Sam Mayer, who triggered a crash that ruined the race for title contenders Harrison Burton and Noah Gragson. Mayer and Gragson are teammates at JR Motorsports and Gragson entered Kansas two points above the cutline.

Mayer, who is not racing for the championship, was on the bottom of the track and clipped Burton as Burton was driving through the center. It sent Burton spinning into Gragson, ending the race for both drivers.

Both must win at Martinsville to advance.

“I thought Harrison was doing a great job, we're racing for a championship, Harrison didn't do anything wrong,” Gragson said. He watched teammate Mayer race live on a monitor and said “there he goes again" as Mayer was tightly racing.

“A bummer, but we're really good at Martinsville. I'll get the situation from today handled," he said, intimating he'll have a conversation with Mayer.

Mayer didn't need a talk from Gragson to understand his role in the wreck.

“Absolutely, I'll take full credit for it,” said Mayer. “It was just a racing deal, in my opinion. Everyone is going to have their own opinions, and they're entitled to it because I did make a mistake.”

He also apologized on television to the teams for Burton and Gragson.

“It was my fault, my mistake. I'll learn from that for the future.”

Justin Haley, Gragson, Brandon Jones and Burton all go to Martinsville below the cutline.

Burton, who is last in the standings, was dejected when he left the infield care center.

“We felt like this was a race we were finally showing what we were capable of and it’s been a rough couple of weeks," Burton said. "We were in contention to win. In racing, that’s all you can do.