Hamilton on 'good hunting ground' at US Grand Prix 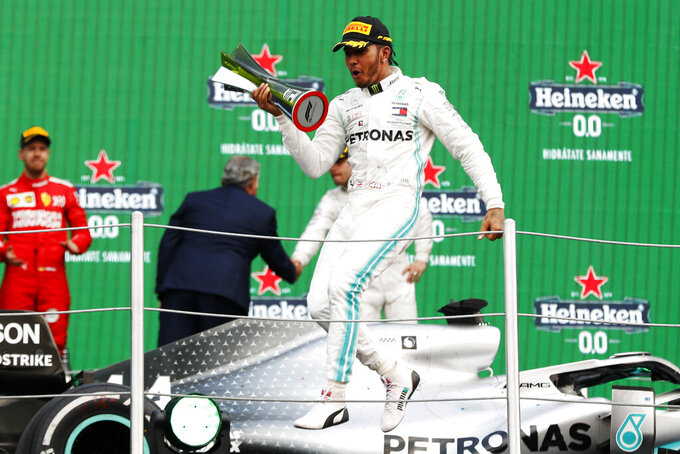 AUSTIN, Texas (AP) — Lewis Hamilton has a certain love affair with the rolling hills and scrub land in the heart of Texas.

It's easy to see why. The Mercedes driver has been almost invincible here, with five wins at the United States Grand Prix since 2012, including a season championship secured in 2015.

That makes it an almost perfect spot for more.

Win another race and another championship on Sunday and the Mercedes driver will sit all alone in second in Formula One history, with only a short step left to reach the top.

The British driver is on the cusp of securing a sixth career championship that would move him past Argentina's Juan Manuel Fangio, the "Godfather" of F1 drivers, and within one of the record seven won by Germany's Michael Schumacher, who is still regarded as the sport's greatest champion.

Hamilton should have little trouble doing it. All he needs to do is finish eighth or higher on Sunday.

"It's been a good hunting ground for me, so very excited to go there and who knows whether we can get the job done?," Hamilton said. "We'll hopefully have a good race there."

He's almost downplaying his chances. There's not much reason to do that at this point.

Hamilton nearly closed out the championship last week with his surprising win in Mexico City , but teammate Valtteri Bottas' third-place finish pushed the title chase into another week. Bottas is the only driver still mathematically in the championship, but just barely.

"I don't mind," Hamilton said after not quite closing it out last week. "I love racing."

But he was in spectacular form last week in Mexico City, getting his 10th win of the season on a track that favored rivals Red Bull and Ferrari.

Hamilton is a defacto spokesman for growing Formula One in the U.S. Still young and stylish at 34, an environmental activist on social media , Hamilton is a valuable face and force for promoting the series in America, which hasn't been as easy as F1 officials hoped when they returned to American soil with the Texas track and race in 2012.

Efforts to start other races haven't been so easy. A dream race in Miami couldn't take hold in the downtown venue on Biscayne Bay the series wanted and the current idea of racing around the parking lot of the stadium where the NFL's Miami Dolphins play has run into fierce opposition from locals.

The Texas race has been a stronghold and Hamilton still does his part. He was in New York City with an event in Times Square before coming to Austin.

Hamilton sees himself — the first and still only black driver in Formula One who comes from a middle class family — as a story that can be inspiring to an American audience.

"I think my story and my family's story is something that a lot of people in different countries can relate to," Hamilton said.

Ferrari and Red Bull could still put up a fight Sunday at the Circuit of the Americas.

Ferrari has started on pole the last six races and the U.S. Grand Prix winner has come from the front row every year since the Texas track opened. The recent runs from pole have produced just three victories however, and none since Singapore on Sept. 22.

The team is partly to blame for not winning through a series of blunders or being outmaneuvered by Mercedes. In Mexico City, Ferrari put drivers Sebastian Vettel on different pit strategies and both surrendered the lead to change tires at different times.

"We certainly want to do better than that," Ferrari Team Principal Mario Binotto said.

Verstappen will be looking to put a bad race in Mexico behind him. He was stripped of pole position in Mexico City because of a penalty for not slowing down while under a yellow flag in qualifying. He then punctured a tire on the fourth lap. A car and driver that had the pace to win finished sixth.

Verstappen finished second in Texas last year and won his late-lap duel with Hamilton for the position.

"A lot is possible at this track as there are so many good overtaking opportunities, which makes things interesting in the race," said Verstappen, who will be racing his 100th career grand prix at just age 22.

Hamilton, who is driving his 248th, may be wary of talk like that from Verstappen. Their cars touched on the opening lap in Mexico City, and Hamilton said he's learned to give Verstappen a lot of room to race.

"It's the smartest thing you can do," Hamilton said.