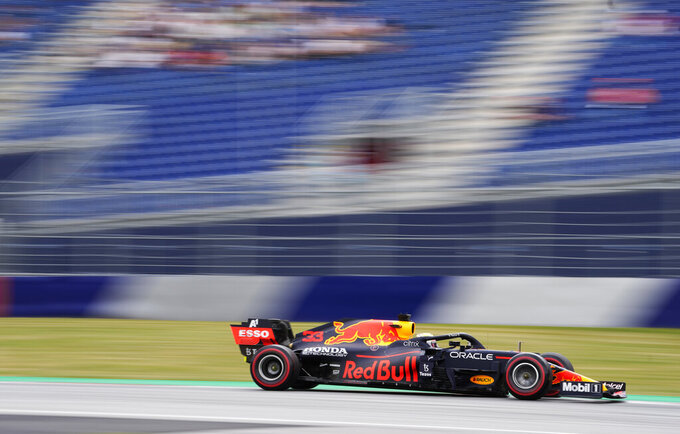 Red Bull driver Max Verstappen of the Netherlands steers his car during the first free practice for the Austrian Formula One Grand Prix at the Red Bull Ring racetrack in Spielberg, Austria, Friday, July 2, 2021. The Austrian Grand Prix will be held on Sunday. (AP Photo/Darko Bandic)

SPIELBERG, Austria (AP) — Mercedes found welcome speed in the rain at the Austrian Grand Prix on Friday, with Formula One champion Lewis Hamilton leading a damp second practice ahead of teammate Valtteri Bottas.

The conditions proved less to the liking of championship leader Max Verstappen. The Red Bull driver topped the leaderboard early on but drifted down to third place as the track became wetter.

Hamilton was .189 seconds ahead of Bottas and .217 clear of Verstappen on Red Bull's home track.

But after losing the last four races to Red Bull, Hamilton remains wary about what will happen in qualifying on Saturday.

“They’ve definitely got something extra in their bag, I already know that,” said Hamilton, whose last win was at the Spanish GP on May 9. “We’ve definitely made some small steps forward but not enough to close the (gap). I just expect them to turn up (with) a little bit more tomorrow."

Hamilton has an F1 record 100 pole positions but trails Verstappen 3-2 for poles this season.

“They’ve basically got the qualifying mode that we used to have,” Hamilton said. “I don’t understand where they get it (the extra speed) from, but it’s impressive and we’ve got to work hard to try and see if we can match it."

Still, it was a positive sign for Mercedes that the drivers in fourth and fifth — Aston Martin pair Lance Stroll and Sebastian Vettel — were using Mercedes engines.

Verstappen won here last Sunday to extend his lead over Hamilton to 18 points after eight races, and the hordes of orange-clad Dutch fans will be hoping for a repeat success on Sunday.

With about 25 minutes left in the afternoon session, rain arrived at the track and Verstappen was advised to stay on the track because wet conditions are expected for Sunday’s race.

The circuit became slippery even for Hamilton, who went off at Turn 4 into some gravel near the end of P2.

Two-time F1 champion Fernando Alonso, meanwhile, expressed his frustration at one of the drivers in front of him.

“I can’t believe it,” Alonso said angrily on team radio, using an expletive. “Who was the guy?”

Alonso probably expected it to be one of the more inexperienced drivers.

Perhaps out of respect for the 2007 F1 champion, who is two years his senior, Alonso said nothing back.

Earlier, Verstappen led P1 from two Ferraris, with Charles Leclerc .266 behind him in second place and Carlos Sainz Jr. placing .288 in third.

It was not a good start for Hamilton, who was seventh and had an early lap time deleted for going off track limits.

He said the car's setup was not right.

“It was a bit of a struggle because I was just trying a different variant of the car and the car was unhappy,” Hamilton said. “So then I had to make some more changes back and it felt much better.”

Cool and overcast conditions made it difficult to get proper tire grip. Japanese driver Yuki Tsunoda struggled to control his AlphaTauri and went off into gravel, while Stroll veered off into a grassy area. He later went off into gravel and complained that his tires were “done.”

Hamilton also had issues with his tires.

“Tires are nowhere near ready,” he said over team radio with a few minutes left.

Meanwhile, Chinese driver Zhou Guanyu, the F2 championship leader, made his debut for the Alpine team and was 14th.

“Thank you so much for this experience, everyone, I absolutely loved it,” Zhou told his team at the end.

He is Alpine’s test driver and replaced Alonso for the first session only.

The last Chinese driver in F1 was eight years ago, when Ma Qing Hua drove in practice for Caterham.

Large crowds gathered around the Red Bull Ring, nestled in the Styrian mountains, with hundreds of tents spreading across surrounding fields in makeshift campsites.

Weather could play a part in the grid positions and the race itself, with cloudy conditions forecast for Saturday’s qualifying.

Thunderstorms are forecast for Sunday’s race.