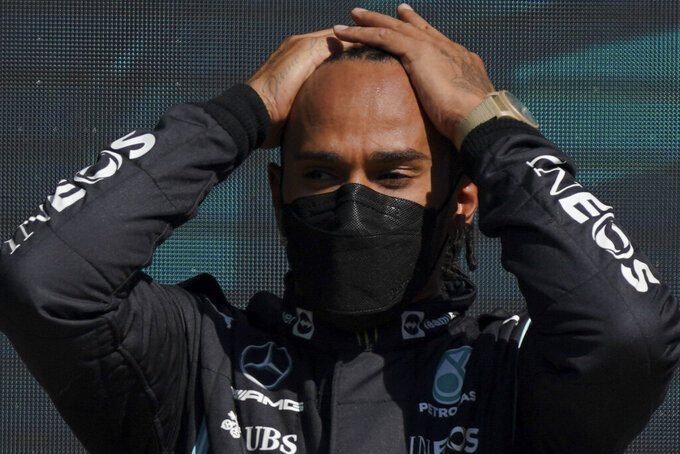 SAO PAULO (AP) — Lewis Hamilton is running out of time in his quest to win a fifth straight Formula One title, and the Brazilian Grand Prix offers the British driver little hope of catching leader Max Verstappen.

The seven-time champion from Mercedes trails his Red Bull rival by 19 points heading into Sunday’s race, the fourth-to-last event of the season.

“I would imagine it’s as steep as it can be,” Hamilton said Thursday about the challenge of catching the Dutchman at Interlagos.

Verstappen won in Brazil two years ago, while last year’s race was canceled because of the coronavirus pandemic. The Dutchman also won last weekend in Mexico and Red Bull is only one point behind Mercedes in the constructors’ championship.

“Their pace was phenomenal in the last race. They have had a strong car all year. They have had the strongest car actually, you can tell,” Hamilton said. “Last time here (in Brazil) they were incredibly strong. We are anticipating again that they will be very hard to beat this weekend.”

The traditionally unpredictable weather at the Sao Paulo track could have an effect on the race, though local weather forecasts say the rain is not expected to last into the weekend. Both Hamilton and Verstappen are good in wet conditions, but results can be unpredictable.

Hamilton also said he has had difficulties with his car because of recent changes.

“This year we have had our wings clipped. It has definitely been harder from an operational sense to maximize the car,” Hamilton said. “We will just try to focus on getting the car in the right window, and that is not easy. It is not an easy car to set up.

“It is really difficult to explain and to go into in terms of details, but it is just harder to optimize.”

The Brazilian GP will be the third event this season with a qualifying sprint race on Saturday. Friday’s training session will have the traditional qualifying format to set positions for the sprint race, which will determine Sunday’s grid.

The two previous sprint races were held in Silverstone and Monza.

The three days of action at Interlagos will bring 170,000 fans to the track. The state of Sao Paulo only removed restrictions on full capacity at sporting events at the beginning of November.

Brazil has reported more than 610,000 deaths from the coronavirus, but the rate has sharply reduced around the country.