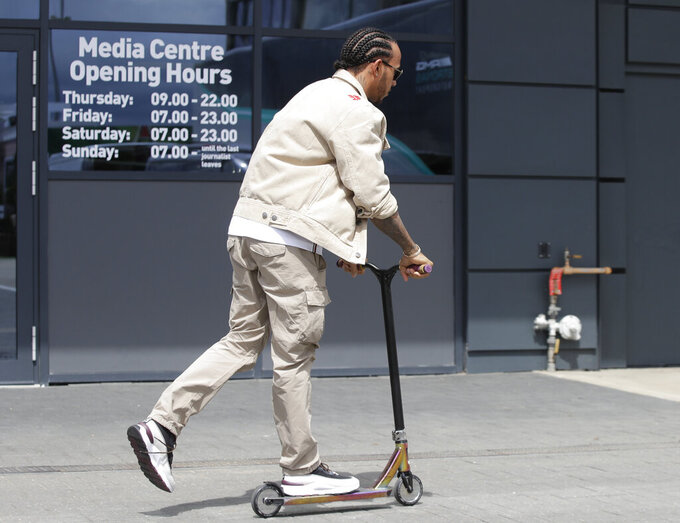 Mercedes driver Lewis Hamilton of Britain rides a scooter in the paddock of the Silverstone racetrack, in Silverstone, England, Thursday, July 11, 2019. The British Formula One Grand Prix will be held on Sunday. (AP Photo/Luca Bruno)

SILVERSTONE, England (AP) — In a season of often mundane racing, the one time Lewis Hamilton can hope to grab the attention of home Formula One fans is the British Grand Prix.

On Sunday, that will be a whole lot harder.

Down in London, England's cricketers will be contesting their first men's World Cup final in 27 years.

And taking place at the same time near the British capital will be the men's final at Wimbledon.

Hamilton, the reigning F1 champion and current championship leader, is not happy he has to share the limelight with so many other sports.

With the trio of big events, the clashes are proving even more problematic than last Sunday when three soccer finals were played on three continents in different time slots: the Women's World Cup in France, the Copa América in Brazil and the CONCACAF Gold Cup in the United States.

"I don't understand why the organizers put the race on the same day as all these other big events," Hamilton said Thursday at Silverstone, discussing the Cricket World Cup and Wimbledon finals. "I hope in future they (don't). This is such a special weekend it needs the focus of the whole country. People will be switching between channels on Sunday not knowing what to watch."

Channel Four, the free channel showing the British Grand Prix, landed late rights to show England play New Zealand and will squeeze the racing around coverage of the cricket final. During Hamilton's bid for a record sixth home race win, cricket coverage will switch to a secondary channel.

"I come here to raise the flag and do the country proud," Hamilton said. "It's such a privilege to be here. The British Grand Prix is the most special of the year. The sheer magnitude of it, how many people come here. It's a special weekend, there's excitement, adrenaline.

"My whole family is coming this weekend so it's that one weekend where it's the most special because your closest support surround you. I've had some spectacular races here."

In the last race in Austria two weeks ago, Hamilton started fourth and lost time to replace the front wing of his Mercedes after 31 laps. He finished fifth.

"We're here to improve this weekend as a team," Hamilton said. "The last one was difficult for us. I think it will be close."

What is certain is that Hamilton will have more chances to win at Silverstone in the future. Organizers struck a new deal this week to continue the race on the central England circuit through 2024.

"It feels like a long way away. Who knows if I will still be here then?" said the 34-year-old Hamilton, who is under contract at Mercedes until 2020. "If I'm not, if I stop racing, then I won't be here in any other capacity."