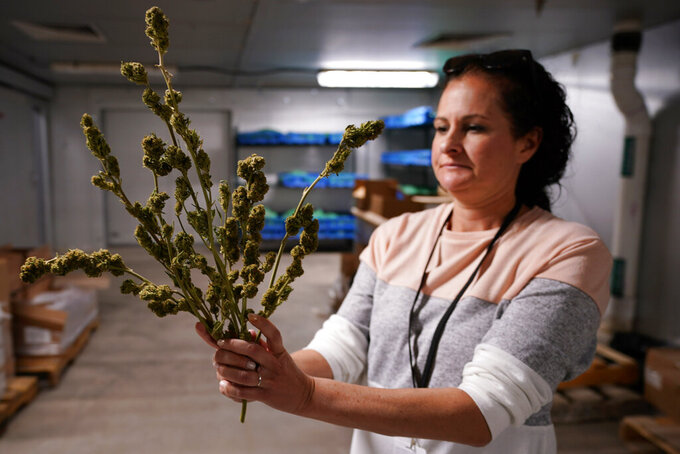 LONG POND, Pa. (AP) — Let’s nip this in the bud: No, Pocono never considered asking for 95 more miles added to the length of Saturday’s NASCAR Cup race so the first CBD-sponsored event could be called the Pocono Organics 420.

On the farm and the track, the Pocono Organics CBD 325 fits just fine.

“Yeah, you should have heard some of the suggestions,” Pocono CEO Nick Igdalsky said, laughing. “Our fans had some fun.”

Just wait until one of the cars goes up in smoke.

OK, the punchlines flow at Pocono Raceway but the hemp market, specifically CBD, or cannabidiol, is serious business to the track that will run the first NASCAR Cup Series race Saturday with CBD as the title sponsor.

Yes, Igdalsky had hemp flower on hand during a Friday tour at Pocono Organics, one of the largest regenerative organic certified farms in North America, but inside the 35-foot-tall greenhouses were rows and rows of cherry tomatoes, eggplants, pepper and assorted fruits and vegetables.

“While we do grow hemp, and have our own CBD line,” track President Ben May said, “you name it, we grow it.”

There is a 380-acre farm on track property -- the spires that highlight the 2 1/2-mile track rise in the distance across the road from the market picnic tables -- and roughly 40,000 feet of greenhouse space.

But it’s hemp that drives interest at the farm. CBD products, like the ones sold at Pocono’s cafe, are derived from hemp and contain no THC, the chemical in marijuana that produces a high. Hemp fiber and seeds are also used to produce textiles, rope, paper, cosmetics and fuel.

The store sells CBD bundles of products that range from bath bombs, creams and lip balms -- just in case the average NASCAR fans forget to pack their own with the beer and ice in the cooler.

The sponsorship, though, could open new doors of revenue for teams and tracks across NASCAR. Pocono simply had to adhere to NASCAR’s CBD guidelines. The critical one, CBD must test at an independent lab and contain less than 0.3% of THC for approval.

“We’re growing a hemp crop here that is hand-seeded, hand-cut, hand-dried by our staff here,” May said. “It doesn’t leave our property. We’re not buying it from a third party. We know everything about the seed, the plant and the process all the way to the formulation.”

CBD could be a new revenue driver for NASCAR.

A Gallup Poll released Nov. 9 indicated that 68% of Americans favor legalizing marijuana — double the approval rate in 2003. That wide margin was evident in the election, with marijuana measures passing with strong bipartisan support.

CBD, though, is not ready for its close up.

NBC will not mention CBD during Saturday’s broadcast and the track has two logos for the event -- one with CBD in bold and the other that highlights 325.

“Per the agreement between NASCAR, Pocono Raceway and Pocono Organics, NBC Sports will call the race the ‘PoconoOrganics.com 325’ during the broadcast,” NBC said in a statement.

But why is a thornier issue, with the track, NBC and NASCAR all declining to specify how that policy came into place.

NASCAR was sponsored by cigarette manufacturer Winston from 1971-2003. Race teams, tracks, the series itself, need all the funding it can find and chasing corporate sponsorships is as important in the industry as chasing the checkered flag.

Does even Dale Earnhardt Jr. remember the August 2014 Pocono race he won was called the GoBowling.com 400? Sunday’s Cup race is called the Explore the Pocono Mountains 350.

“There’s a lot corporations that are just not there yet,” coming out of the pandemic, May said.

Pocono says every camping space is sold out for the weekend -- about 3,000 spaces, including 800 spots added ahead of last year’s race weekend -- and grandstand ticket sales are ahead of 2019.

With that many people, maybe a CBD bath bomb on the way out isn’t such a bad idea.

“What’s important to NASCAR was that testing and did the product meet their standards. And it did,” May said. “And we’re grateful we got their approval."