Honda to withdraw from Formula One at end of 2021 season 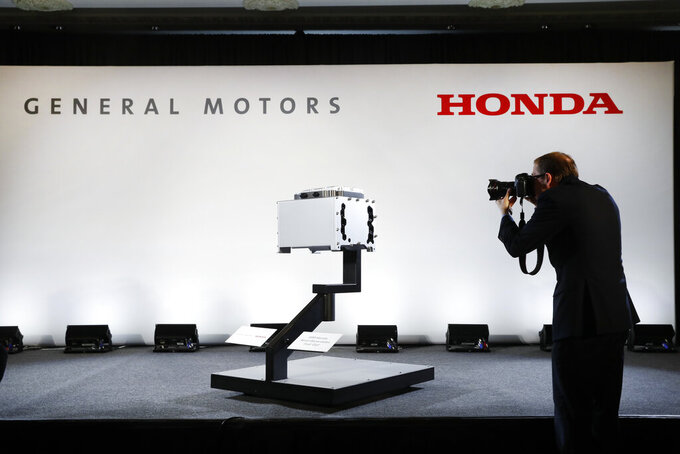 FILE -In this Jan. 30, 2020 file photo, a photographer captures images of the General Motors-Honda Next Generation Fuel Cell after a news conference in Detroit. On Thursday, Sept. 3, General Motors and Honda say they have signed a deal to explore sharing vehicle underpinnings and propulsion systems in North America. The companies say planning discussions on jointly designed vehicles will start immediately and include vehicles powered by both electricity and internal combustion engines. (AP Photo/Paul Sancya)

TOKYO (AP) — Honda will withdraw from Formula One at the end of the 2021 season as it shifts to a goal of carbon neutrality, the Japanese car manufacturer said Friday.

Honda is the engine supplier for the Red Bull and AlphaTauri teams. It had resumed competition in F1 in 2015, originally with McLaren, but Honda-powered cars never managed to become regular title challengers in an era dominated by Mercedes.

Red Bull Racing said it was “disappointed” but noted the success of the partnership with Max Verstappen scoring Honda's first victory since 2006 at the 2019 Austrian Grand Prix, followed by three other wins and 13 podium finishes.

“Their decision presents obvious challenges for us as a team but we have been here before and with our strength in depth we are well prepared and equipped to respond effectively, as we have proven in the past,” Horner said in a statement.

“In Formula One, we have reached our goal of scoring victories, and achieved certain results,” Hachigo said. “Now we will put our strength into innovation in the new field of power units, carbon-free energy and achieving carbon neutrality. This could be a challenge as difficult as Formula One.”

Honda's exit could cause problems for Red Bull. Verstappen is under contract until 2023 but Dutch newspaper De Telegraaf has reported that he has an exit clause allowing to leave at the end of 2021, ahead of sweeping changes to F1 rules for the 2022 season.

It's also unclear who could supply Red Bull's engines from 2022. The team's previous partnership with Renault ended acrimoniously, while Mercedes and Ferrari may be reluctant to supply a team perceived as a championship rival.

In 2013 when Honda announced its planned return to F1 with McLaren, the hope was they could rekindle the partnership which saw McLaren-Honda win four straight constructors' titles from 1988 through 1991 with drivers like Alain Prost and Ayrton Senna.

Instead, the new Honda V6 turbo engines were underpowered and unreliable. Even with former world champions Fernando Alonso and Jenson Button at the wheel, McLaren didn't score a single podium finish in three seasons and was often out of the top 10.

A transitional year in 2018 with Toro Rosso was followed by a full Red Bull partnership in 2019 and 2020. Still, the Honda-powered cars have remained off the pace of Mercedes despite an uptick in results.

In its statement, Honda said it could use some F1 technology and know-how to develop future technology.

“In the meantime, as the automobile industry undergoes a once-in-one-hundred-years period of great transformation, Honda has decided to strive for the ‘realization of carbon neutrality by 2050,’” Honda said. “This goal will be pursued as part of Honda’s environmental initiatives which is one of the top priorities of Honda as a mobility manufacturer.

“Toward this end, Honda needs to funnel its corporate resources in research and development into the areas of future power unit and energy technologies, including fuel cell vehicle (FCV) and battery EV (BEV) technologies, which will be the core of carbon-free technologies,” it said.