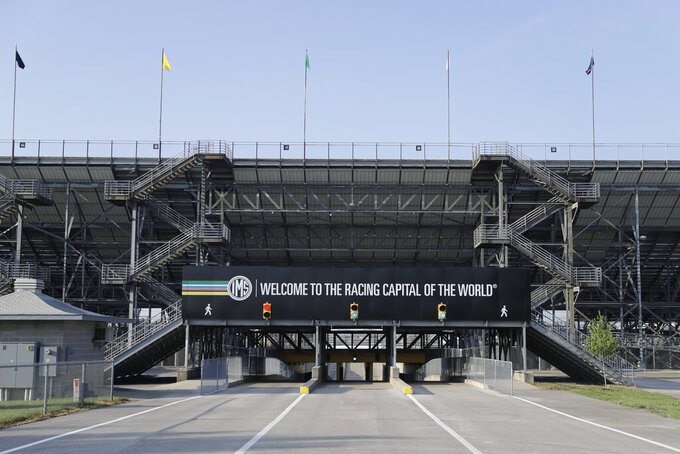 The Indianapolis 500 will limit fan attendance, implement strict testing, social distancing and mask requirements, and lift the local broadcast blackout for just the second time in nearly seven decades when the postponed race is run next month at Indianapolis Motor Speedway.

Speedway officials released a detailed 88-page plan Wednesday for conducting the 104th edition of the race in the age of the coronavirus. The first race under new track owner Roger Penske was scheduled for its usual May date on the Sunday of Memorial Day weekend, but the virus outbreak caused it to be rescheduled for Aug. 23.

Penske Entertainment chief executive Mark Miles acknowledged “everything will be different about this year's race.”

Capacity will be limited to 25% — about 87,500 fans — at the massive speedway, and tickets will be distributed to allow proper social distancing among groups. Even a crowd that size would make it the largest sporting event in North America and perhaps anywhere since the pandemic shutdown began in March.

Most concessions will consist of prepacked food. Fans will have their temperature checked upon entry and receive hand sanitizer and a mask, which they will be required to wear when they are not eating or drinking. New signage and video boards will be posted to provide guidance throughout the speedway.

“In terms of the plan itself, it is approved. We have a green flag and we expect to do the race,” Miles said. “We think it's important to have a race — have this race — to set an example for how people can come together under proper procedures.”

The Indianapolis 500 has run continuously since 1911 with just two breaks for World War I and World War II. While the speedway does not announce official attendance figures, the sprawling facility with its infield lake and golf course can hold about 300,000 people, surpassing Ascot Racecourse as the largest sports facility in the world.

The speedway has prohibited live television coverage of the race locally since 1950, fearing it would cut into ticket sales and attendance. The only time besides this year the blackout was lifted was for the 100th running in 2016, when officials announced that all grandstand and general admission tickets had sold out.

“Under these circumstances," Miles said on a conference call, “we thought it was important this year.”

Many of the Indy 500 safeguards are familiar to IndyCar, which has conducted six races since resuming its season — including the last two weekends at Road America and Iowa Speedway, where a limited number of fans were allowed.

“I thought they did a great job,” Miles said. “Fans wanted to be there. Fans did their part. There were chalked circles in grass areas and people sat in those circles with who they came with. And we've got a couple more races before we get to Indianapolis. We think we get better all the time at it.”

The biggest sticking point among fans could be the mask requirement, which has become a polarizing — and deeply political — issue across the country. But the mayor of Indianapolis joined several cities and states in issuing an executive order that mandates them in public spaces earlier this month, and Indianapolis Motor Speedway president Doug Boles hopes that six weeks of the requirement will give fans the time to become accustomed to wearing them.

“I know how passionate our customers are for the 500 and I know they want this to happen, and I know they're going to participate,” Boles said. “A lot of it's going to feel the same. It is still our place to celebrate every year.”

IndyCar is off this weekend before returning Aug. 9 on the road course at Mid-Ohio. Teams will then head to Indianapolis to begin practice and qualifying, both of which will be open to the public with the same safeguards as race day.

Fans with access to Gasoline Alley will still be allowed to wander among the garages, though the amount will be capped at a much smaller number. But many popular events, such as concerts, the red carpet and the Last Row Party, have been canceled. The activities on Saturday, including Legends Day and the 500 Festival Parade, also have been canceled or will transition to digital platforms to give organizers time to prep the facility for Sunday.

“The organizers have done a tremendous job of identifying those environments that have been high-risk and they have been canceled,” said Dr. Ed Racht, chief medical officer for Global Medical Response, who helped speedway officials formulate their plan. "The temperature screening component identifies potentially anybody who wouldn't be allowed in. Face coverings make a difference, and I think culturally, we're all realizing that is an effective way to minimize transmission.”