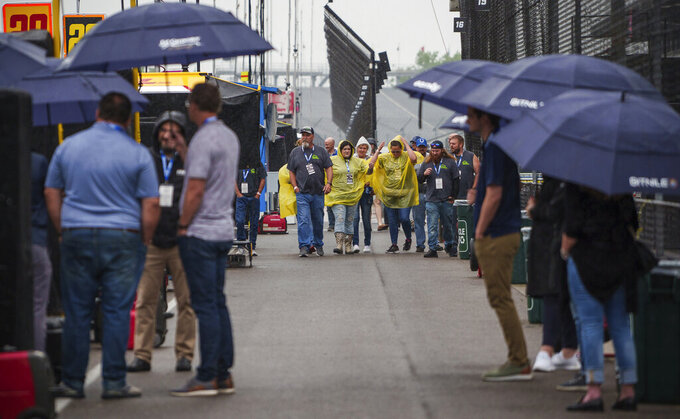 With umbrellas and ponchos, IndyCar fans walk down a rain-soaked pit area at Indianapolis Motor Speedway, on Wednesday, May 18, 2022, in Indianapolis, as wet weather postponed practice for the Indianapolis 500 auto race. (Mykal McEldowney/The Indianapolis Star via AP)

INDIANAPOLIS (AP) — As a steady rain fell on Indianapolis Motor Speedway, Pato O'Ward turned on Instagram live and answered questions from his followers while making a bowl of guacamole.

It wasn't long before teammate Felix Rosenqvist wandered into O'Ward's motorhome and joined in the social interaction. When they realized they were missing Juan Pablo Montoya, Rosenqvist summoned the third Arrow McLaren SP driver for the Indianapolis 500 to the motorhome for chips and dip.

The bored trio passed the time responding to fans, and when O'Ward held up an empty guacamole bowl for the camera the McLaren drivers ended the session and looked for something else to do: they made paper boats and tried to race them through the puddles on pit lane.

That was the most excitement on Day 2 of preparations for the 106th running of the Indy 500.

IndyCar had scheduled six hours of track time Wednesday but the rain never gave anyone a chance. Series officials called it a washout with almost three hours remaining on the clock.

Stefan Wilson wandered up to the fourth floor of the IMS media center, soaking wet and looking for a little conversation to pass the time.

His first two days at the speedway have been mostly waiting around. Because his deal as the 33rd and final entrant was not announced until 13 days ago, Wilson has been at the mercy of his hybrid team of Cusick Motorsports and DragonSpeed.

The entry is powered by Chevrolet and aided by what seems like half the paddock. The chassis came from A.J. Foyt Racing; the utility cart is from Juncos Hollinger Racing; Team Penske lent a refueling tank and pit lane nitrogen bottle hauler; Andretti Autosport gave Wilson wheel guns, a setup pad and water extinguishers.

Wilson couldn't participate in Tuesday's veteran session because he'd yet to pass a refresher test required to run the Indy 500 on May 29. So he got two hours alone on the track Tuesday afternoon and then made it back out with the rest of the field at the very end of the day.

“Considering where we were on Sunday when the car was in a lot of pieces, and it was in less pieces on Monday, and even less pieces on Tuesday, it's very encouraging to see the progression and we've got a good foundation to build on,” Wilson told The Associated Press.

Wilson credited Jay Frye, president of IndyCar, for working with other teams through a labor shortage to ensure Wilson got into the race.

“If we had not been able to run this year, I am not sure we'd have been able to come back and try next year,” Wilson told AP.

His effort is with friend Don Cusick, who debuted Cusick Motorsports in last year's Indy 500 with Wilson. The car is again sponsored by LOHLA Sport and Sierra Pacific Windows.

Danish driver Christian Lundgaard opened May with his first trip to the Kentucky Derby, where he found himself a winner at his first horse race.

The IndyCar rookie used a $6 credit slip in his pocket to wager on Rich Strike, a horse he picked only because its odds were longest. When Rich Strike pulled off the upset, Lundgaard collected a $490 payout.

It wasn't his only win at Churchill Downs, either. Lundgaard placed a $48 bet on an earlier race on horse number 48 “because there were too many signs” for him not to make the wager at the 148th running of the Derby.

“I said Jimmie Johnson is going to win because obviously it was the 48 and it actually ended up winning and it was very fun. Because I was certain that ticket was going to win,” Lundgaard said.

So does Lundgaard now believe that Johnson, like Lundgaard a rookie in this year's Indy 500 field, will win the May 29 race in the No. 48?

Can Lundgaard in his Rahal Letterman Lanigan entry?

“I think everyone's got a fair chance,” Lundgaard said. “We've just got to finish the race and see where we're at."