Indy fans, start your party! 500 is on, and crowds are back 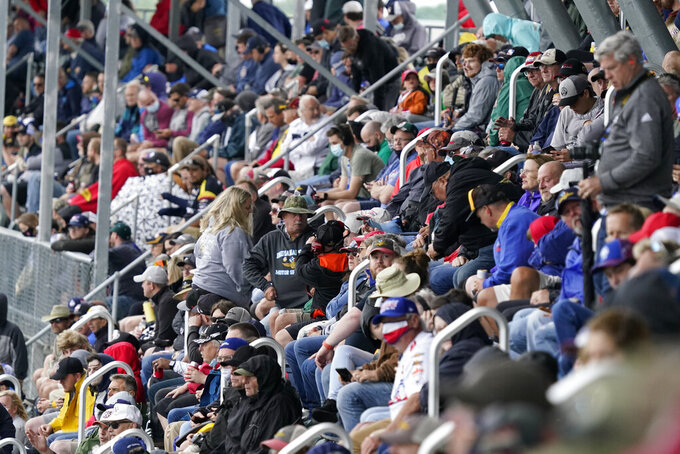 Fans watch during the final practice session for the Indianapolis 500 auto race at Indianapolis Motor Speedway, Friday, May 28, 2021, in Indianapolis. (AP Photo/Darron Cummings)

INDIANAPOLIS (AP) — Joe Wagle held a Jack and Coke — “I already had a couple of beers" — close to his bare chest, just another shirtless fan sporting American flag overalls getting ready for the return of the party at the Indianapolis 500.

Wagle is from Terre Haute, an hour’s drive west of Indianapolis, and said he has been to more than 10 Indy 500s. Like so many others, he came to the race as a kid with his dad and has since camped out in the sprawling infield of Indianapolis Motor Speedway and partied in the rowdy Snake Pit for the race.

“It’s hundreds of thousands of people getting together to celebrate freedom and to have a great time,” he said. “The race is awesome. It’s just good old Midwestern fun.”

The traditional trappings of Carb Day -- a sentimental part of Indianapolis 500 lore -- were absent on Friday because of the pandemic. Concerts were canceled. Autograph sessions were scrapped. Indy slammed the brakes on the pit crew competition. The Snake Pit remains in hibernation.

Few fans cared. They are back at “The Greatest Spectacle in Racing.”

Banned from the speedway last year, race fans have packed their coolers and rolled into Indy ready to cut loose. IMS had crowds for qualifying last weekend that rivaled the sizable ones last seen in 2016 for the 100th running of the race, and when the Indy 500 drops the green flag with a reduced-capacity sellout crowd of 135,000 on Sunday it will be the biggest sports event in the world since the pandemic hit 18 months ago.

The barrel-bellied, shirtless man in American flag overalls grabbed a seat just a few rows off the track. Ricky Bobby and Cal Naughton Jr. hit the Brickyard (or at least two men dressed as the “Talladega Nights” characters). And a few cunning fans chugged beers and duct taped the empties together to form a makeshift umbrella -- they named it an umbrewlla (patent pending) -- on a rainy day at Indianapolis Motor Speedway.

Everyone asked said they felt safe at the track and the usual precautions were in place all over IMS. IndyCar had a sign asking for proof of vaccination before anyone entered the garage or pits.

Through vaccinations — including more than 90,000 done at the speedway itself — speedway and IndyCar owner Roger Penske got the clearance for IMS to allow 40% attendance. Masks on fans went the way of the carburetors -- there hasn’t been a carburetor on an Indy car since 1963 -- though a three-pack of IMS covers sold for $25 at the merchandise store. Also for sale, a $28 hat with the slogan “Where Tradition Never Stops.”

Spectators were not permitted last August for the delayed 500 because of the pandemic, so all the booze and whistles were stripped from the event and many fans instead threw socially-distanced parties at home.

“Last year was the worst year ever,” 1969 Indy 500 winner Mario Andretti said Friday. “It was eerie on race morning. Cars were on the grid, not a soul anywhere. I had an interview on the sixth floor and I’m looking down thinking, ‘Oh my goodness, it can’t get any wore than that.’”

New coronavirus cases across the United States have tumbled to rates not seen in more than 11 months, thanks in part to vaccination campaigns that cut both severe COVID-19 cases and the spread of the virus. IMS masked ambassadors walked around holding tennis-racket sized signs imploring fans to “wear face covering.” The signs were largely ignored. Fans appeared more at ease than those who tried to party in the thick of the pandemic at the Daytona 500 in February, or even the more reserved celebrations at the Kentucky Derby.

Some came in costume.

Steve Willard of Boulder, Colorado, — who will attend his 26th Indy 500 -- and his friend Kevin Messick dressed in their Shake N Bake firesuits because they lost a bet between a Denver Broncos-Indianapolis Colts game.

Willard said he would leave the costume at home Sunday when he watches the race from the paddock penthouse.

Joe Schnieders and his friend Jenny Shorter served as architects for a beer-can umbrella and tinkered on the correct construct well into Friday afternoon.

“We missed the opportunity to make it drinkable,” Schnieders said. “It’s the first time I used anything practical with beer cans.”