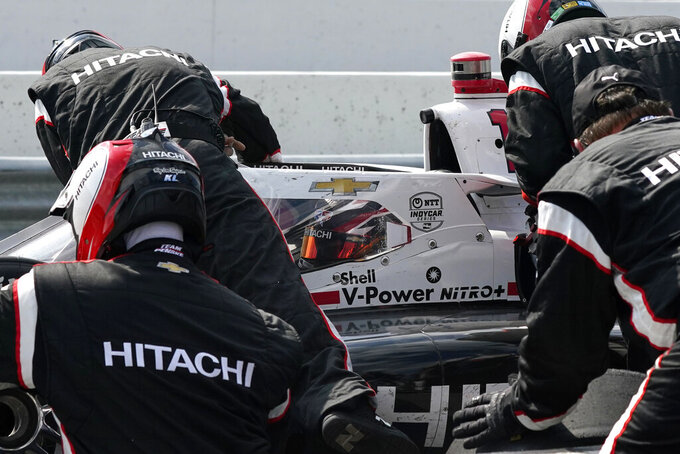 MADISON, Ill. (AP) — Josef Newgarden raced to his second IndyCar victory of the season Sunday, holding off rookie Pato O'Ward before a late caution ended the race at World Wide Technology Raceway under the yellow flag.

It's the second IndyCar race to finish under caution in one week. Takuma Sato won the Indianapolis 500 under yellow last Sunday.

In the second of two weekend races at the short oval outside of St. Louis, it was Sato who brought out the caution with four laps remaining when he hit the wall. The pace car picked up the field with three laps remaining and IndyCar did not have enough time to restart the race.

It denied O'Ward a chance to challenge the reigning IndyCar Series champion for the victory. Newgarden, in a Chevrolet for Team Penske, won for the 16th time in his career and closed the points deficit on championship leader Scott Dixon.

Dixon won Saturday in the first race of the Gateway doubleheader and has four victories in nine IndyCar races this season. Newgarden and Team Penske have three wins.

Newgarden was put in position to win the race when his crew got him off pit lane on the final stop ahead of O'Ward. Newgarden and the Mexican driver had a drag race back onto the track that Newgarden won.

“This was a pit stop victory for me,” Newgarden said. “Really proud of my team. I didn’t win the race, they won it.”

O'Ward, the top rookie in the Indy 500 with a sixth-place finish, earned his second podium of the weekend for Arrow McLaren SP. He was third on Saturday and has six finishes this season of eighth or higher.

“We’re knocking on the door,” O'Ward said. “We are very close and we are going to keep pushing. I know our time will come.”

Newgarden praised the progress O'Ward is making in his first full IndyCar season.

“He did an amazing job. He’s going to do great things in the sport,” Newgarden said.

Although O'Ward seemed to be waiting for the final laps to make a move on Newgarden, he said he didn't think he had a shot at catching him even if the race had one final restart.

Will Power had a shot at winning the race until his final pit stop, when he was slowed behind Ed Carpenter as both cars drove down pit lane. Power finished third to put two Team Penske's on the podium but was aggravated with his result.

“We had a very good car, I thought we had the car to win but obviously it’s a traffic game,” Power said. “We certainly have had a lot of potential this year, it's a very strange year.”

Rinus VeeKay finished fourth and was met after the race by Colton Herta, who finished sixth but was angry at how the rookie had raced him late. Herta and VeeKay exchanged words.

“I really don’t have too much fun driving against him," Herta said, noting the 19 year old “still has a lot too learn.”

Chevrolet had a breakthrough as its drivers swept the top four positions — a week after Honda went 1-2-3 at the Indy 500. Dixon, who finished fifth, was annoyed with fellow Honda driver Zach Veach for slowing both Dixon and Sato's pace in the closing laps.

Dixon assumed Veach was trying to assist Andretti Autosport teammate Herta, but Veach should have had engine manufacturer loyalty to help a Honda reach the podium.

“Veach totally screwed us. He’s two laps down and the guy is just trying to slow everybody down,” Dixon said. “When you are a fellow Honda team, I thought they would have stepped in a little bit, especially when you’ve got four Chevy's out front.”

Dixon still holds a commanding 96-point lead in the standings with three races remaining on the official schedule. A postponed doubleheader at Mid-Ohio is expected to be rescheduled to early September to give IndyCar five races to close the year.

“We can’t give up on it yet,” said Newgarden, a two-time champion. "We’ve been pretty bitten by bad luck this year. What are you going to do? Sometimes it comes your way, sometimes it does not.

Tony Kanaan finished 19th in his final race of the season. Kanaan ran only the oval events this year while easing into retirement. He's hopeful to run at least the Indianapolis 500 next season but so far has only committed to a new all-star series run by Tony Stewart for 2021.

Kanaan, the 2013 Indy 500 winner, has the IndyCar record of 318 consecutive starts. It was snapped earlier this year due to his partial schedule.

“I want to thank my fans, my team and everyone who has been involved in this journey, my family. It’s been good," Kanaan said. "I’m done for this year but hopefully not done totally, but we’ll see. My fingers are crossed that maybe I could come back for a proper last lap with my fans, but for now, drop the mic.”

The race started about 20 minutes late because of oil spilled on the track by a service vehicle after the NASCAR Trucks Series race earlier in the day.

Sunday's race had five different leaders with Sato out front for a race-high 66 laps.