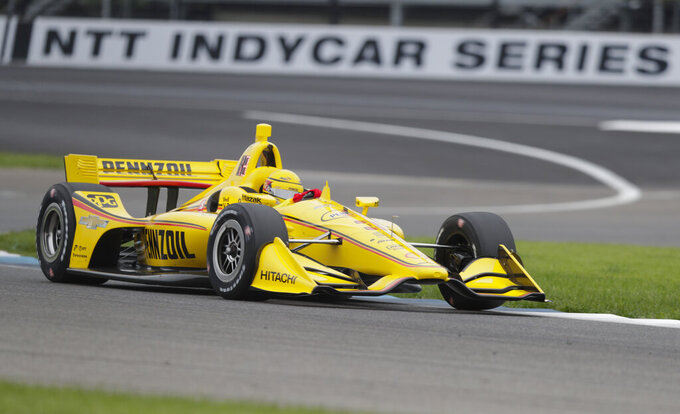 Helio Castroneves, of Brazil, drives through a turn during practice for the Indy GP IndyCar auto race at Indianapolis Motor Speedway, Friday, May 10, 2019 in Indianapolis. (AP Photo/Michael Conroy) 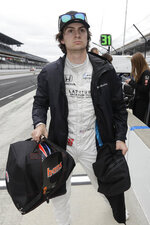 INDIANAPOLIS (AP) — All Colton Herta wanted to do after crashing at Long Beach was race. All he did over the next 3½ weeks was test for two days in Indianapolis.

Twenty-four days after competing in California, Herta and the other series regulars eagerly jumped back into their cockpits to practice and qualify for Saturday's IndyCar Grand Prix.

"It's a long time not to be in a car in between, having two kind of back-to-back bad results," said Herta, a 19-year-old rookie who has posted 24th- and 23rd-place finishes his last two races.

He is not the only IndyCar driver who thought the layoff was too long.

Two-time world champion Fernando Alonso of Spain tuned up for his return to Indianapolis by winning a six-hour endurance race in Belgium. British driver Jordan King, who competes in Formula 2, competed in the same race and also will come to Indy next week ahead of the May 27 Indianapolis 500.

Others, like Will Power, the defending champion in both Indy races, spent time with his family and working out.

"I love being in a car, I love racing," said Scott Dixon, who won his fifth series title in 2018. "The breaks are frustrating. As Colton alluded to, at least you get some test days kind of scattered in between."

The good news for Herta, Dixon and others is that future schedules are not likely to have such an unusually long midseason gap.

IndyCar President Jay Frye told reporters Friday he expects next season's schedule to have a more traditional two-week break between races leading into May, in part because Easter will be earlier.

In the meantime, race organizers attempted to take advantage with an extended build up to the month of May.

James Hinchcliffe pitched in as one of the notable names who agreed to help promote both races, all three qualifying sessions and additional community events. The result: Speedway President Doug Boles expects to see an increase in attendance for Saturday's race, despite the threat of rain, and also for the showcase Indy 500.

For Hinchcliffe, the 24-day break helped him get in the right frame of mind.

"This is two races really for us, but (500) qualifying weekend really is like a race in itself with a week of practice in between, so this is a very busy and stressful month," he said. "If you think about how many days we're going to spend on track over the next three weeks, it more than makes up for the lack of track time we've had the past three weeks."

Still, it remains to be seen if IndyCar can maintain the momentum it built by running four races from March 10 through April 14.

And it didn't necessarily play to the desires of either drivers or fans, who want to see more races and fewer breaks.

"Two weeks is probably the right amount, three weeks is probably one too many," Frye said. "You look back and it feels like it's been a while. How did it work? We were able to plug in a big day of testing. Again, just as a racer, it feels one week too long."