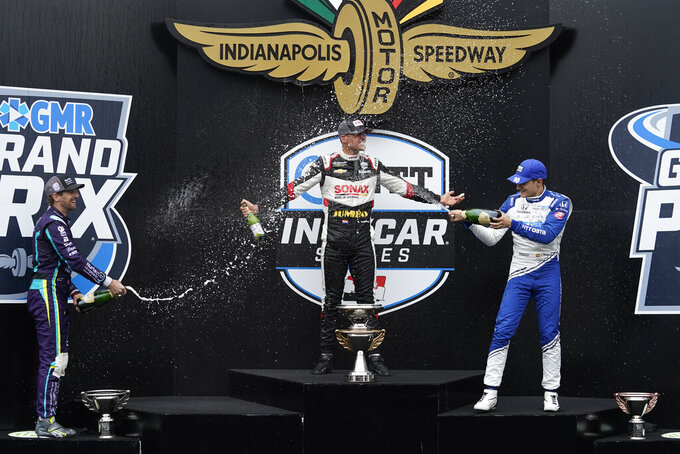 Rinus VeeKay, center, of the Netherlands, celebrates with Romain Grosjean, left, of Switzerland, and Alex Palou, of Spain, after VeeKay won an IndyCar auto race at Indianapolis Motor Speedway, Saturday, May 15, 2021, in Indianapolis. (AP Photo/Darron Cummings)

INDIANAPOLIS (AP) — IndyCar announced a contract extension with NTT at its title sponsor Thursday, a move that solves one of the big financial questions facing Roger Penske in his second year as owner of the series.

NTT is a global technology giant that became title sponsor of the IndyCar Series in 2019. The company has since become the official technology partner of IndyCar, Indianapolis Motor Speedway, the Indianapolis 500 and NASCAR's Brickyard weekend.

“Over the first two years as entitlement sponsor of the series, the dedicated team at NTT has helped IndyCar become more efficient and effective through smart technologies," said Penske, who became owner of IMS and IndyCar in January 2020. "As our sport continues to grow by connecting with a new generation of fans, NTT helps take us down new roads by creating more engaging experiences through our shared digital platforms.”

Next on Penske's to-do list is ironing out a new television contract. The current deal with NBC Sports is in its final season and it remains unclear where IndyCar may land.

NBC in its current deal with NASCAR will be shifting programming to the USA Network when the NBC Sports cable channel ceases operations near the end of the year. IndyCar this year has a record nine races on NBC but practices and qualifying have been shifted to its Peacock streaming service.

Penske will no doubt be looking for a higher rights fee in the next TV deal and NBC may choose to walk away.

IndyCar is also courting a third engine manufacturer, which would not enter the series any earlier than the 2023 debut of a new engine. The new V6 engine will go from 2.2 liters to 2.4 and add approximately 100 horsepower. The twin-turbocharged V-6 will also have hybrid tech for the first time.

“We believe that in every respect the series is growing,” said IndyCar CEO Mark Miles. “I hate talking about being positioned for growth. I like growth. I think it’s happening now. All the metrics are indicating that. More fans are paying more attention, being more engaged with us.”

A critical component is extending the relationship with NTT, a company that helped the relaunch of IndyCar’s mobile app and is working on boosting the data experience for viewers.

"We wanted to get it into the hands of more fans and more users so we started by focusing on access. The previous version was only available on one carrier. We made the app available on all carriers and platforms," said Eric Clark, NTT Data Services chief digital and strategy officer.

“Then it was a race to put more data into it, more analytics, give more value, make it more compelling for fans who want to download the app and use the app before, during and after the race.”

“As we continue this partnership, we are committed to drive more data, analytics, AI, and more compelling use cases into not only the app but also to the fans that are at live race events,” Clark said.

At Indianapolis Motor Speedway, NTT worked with Penske on the 100-foot Pagoda Plaza video board that provides a new viewing experience inside the historic track.