IndyCar, teams look at solutions for labor shortage in pits 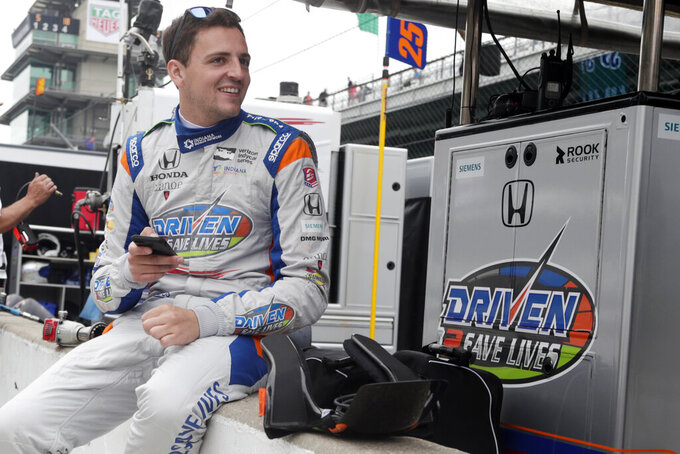 FILE - Stefan Wilson, of England, waits for the start of practice session for the IndyCar Indianapolis 500 auto race at Indianapolis Motor Speedway on May 18, 2018, in Indianapolis. The IndyCar veteran will return to the cockpit for this month's Indianapolis 500. Cusick Motorsports and DragonSpeed announced Thursday, May 5, 2022, they've hired the 32-year-old British driver, virtually assuring race organizers they'll fill the traditional 33-car starting grid. (AP Photo/Michael Conroy, File)

It took Cusick almost a full year to find an 11th-hour solution to run in the Indianapolis 500, teaming up with a partner. Paretta chose a different path, opting for three road races and against Indy as a one-off — the only race of the season.

But the two burgeoning IndyCar teams with visions of full-time programs faced one big obstacle: A lack of crew members and engineers. The American labor shortage ravaging restaurants, factories and other industries has hit Gasoline Alley.

“Going from 22 to 26 full-time teams, that’s a lot of people you'd normally get for these one-offs," Paretta said of the IndyCar Series, which is in something of a renaissance. “I talked to Ed Carpenter and he said, ‘It looks like we’ll have three cars for the 500 and we couldn’t do four, so what does long term look like?' That's when the conversation pivoted. I kept my eyes open for the 500 as a one-off but that’s where the shortage of talent comes into play."

Small, low-budget teams with grand aspirations have been the backbone for filling the traditional 33-car field for the Indy 500. These days, they're having trouble finding the 10-12 crew members they need per car, housing them in hotels and covering the increased daily rate Paretta says can hit $900 per day.

Expansion across racing's many series has only made the competition fiercer. And with IndyCar running with so many teams, its highest full-time total in a decade, bodies are in short suppy.

“It’s great for the guys who are part of the crew because they’re making more money than they ever dreamed possible,” Cusick said. “I’m just hoping this creates a situation where these guys are well-paid enough they want to get in the profession and pursue it.”

The solution for Cusick Motorsports was partnering with Elton Julian's DragonSpeed team. They scrambled to piece together Stefan Wilson's No. 25 car with help from A.J. Foyt Racing, Juncos Hollinger Racing, Team Penske, a steering wheel from Andretti Autosport and a crew from Julian's sports car team.

“We’ve kind of joked about it that it’s like Mr. Potato Head,” Cusick said. “It’s kind of a scavenger hunt, but it’s all there.”

What led to the shortage?

Julian believes there are fewer younger workers to replace those retiring or leaving the business. Others say engineers are pursuing higher-paying jobs outside the racing industry.

Poaching by teams or series and rising costs are factors, too, especially with the desire for individual hotel rooms amid the pandemic. Then there's the struggle to balance travel, home life and feeling like they can't take work breaks.

“It’s late hours and some of those guys seem like they live there, almost,” said 24-year-old Evan Knight, who spent two seasons with Arrow Schmidt Peterson before leaving in February 2021. “For people who live to work, that’s what they want. Some guys would work Monday through Friday and then go run go-karts on Saturday and Sunday. For me, that's way too much motorsporting.”

Dennis Reinbold, whose IndyCar team Dreyer & Reinbold Racing has competed only in the 500 seven of the last eight years and has two cars in Sunday's race, said his car dealerships also are struggling to keep mechanics and technicians. He's taking action.

“We need to do a better job of looking for young people coming out of school and getting them involved," he said. "We're working with technical schools and offering scholarships because I think a lot of young kids don't really consider the car side as a profession.”

IndyCar is pitching in, too. It's funding the Race for Equality & Change initiative, a program designed to introduce boys and girls from ages 11-16 to the world of racing, and after discussing the situation with series team owners last fall, series president Jay Frye opened a job portal.

“The teams look at it often and there's been a half dozen or more people hired,” Frye said. “The 500 is, from a need for people, the worst-case scenario because there are seven teams here that don’t run every week, so that's 70 or 80 people plugged in for this one race."

Everyone hopes the lack of bodies will be short-lived.

But for now, IndyCar teams and other series must learn to cope with the reality.

“It's the reason I decided not to do the Indianapolis 500, 100%,” Paretta said. “The idea of putting something together was kind of a mix and match or whatever and I don’t want to say we were spoiled by last year, but I don’t know if I want to sign up for that again.”