IndyCar welcomes A.J. Foyt and Robert Wickens back to track 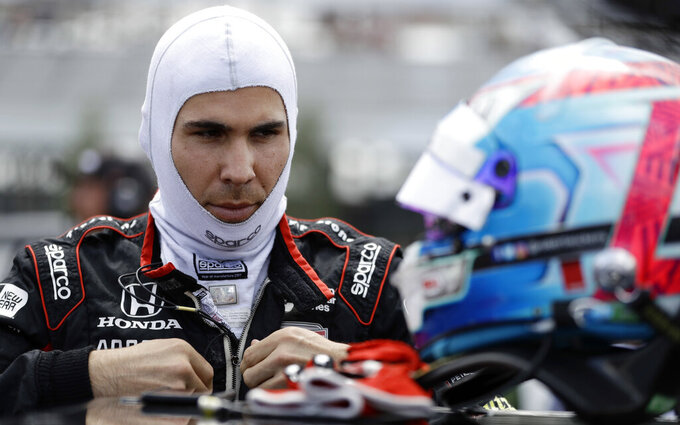 FILE - In this Aug. 18, 2018, file photo, Robert Wickens prepares to qualify for an IndyCar series auto race in Long Pond, Pa. The first IndyCar race of the season will mark returns to the track for both A.J. Foyt and paralyzed driver Robert Wickens. Wickens suffered a spinal cord injury in a crash last August and has been rehabilitating in Denver the last several months. The Canadian said he will be part of IndyCar's driver autograph session at St. Petersburg and participate in a fan event Sunday before the race. (AP Photo/Matt Slocum, File)

ST. PETERSBURG, Fla. (AP) — The first IndyCar race of the season will see both A.J. Foyt and paralyzed driver Robert Wickens back at the track.

Wickens suffered a spinal cord injury in a crash last August and has been rehabilitating in Denver the last several months. The Canadian said he will be part of IndyCar's driver autograph session and participate in a fan event Sunday before the race in St. Petersburg, Florida.

Wickens made his IndyCar debut on the streets of St. Petersburg last year, starting from the pole and leading every lap until he was spun by Alexander Rossi with two laps remaining. He had four podium finishes and was sixth in the standings when he was injured with three races remaining.

Foyt, meanwhile, has not been to an IndyCar race since June. The four-time Indianapolis 500 winner had back surgery in July and then a staph infection, the third for the 84-year-old Texan.

He attended last month's Daytona 500 and acknowledged he has been slowed by poor health and a dislike for hearing aids, but his workload remains about the same. Foyt said through A.J. Foyt Racing on Wednesday that he had to have a bulldozer pulled from a pond and narrowly avoided yet another encounter with bees.

The bulldozer incident occurred, Foyt said, as he was digging and the "'dozer just slipped down."

"It was real muddy and I tried to go faster to get up and out but the machine just slipped further down," he said. "So I stopped before the whole thing went under. I had to have two guys help pull me out because I was in quicksand, I couldn't climb out myself, and I lost a shoe."

Foyt has twice been attacked by bees — a 2005 attack that left 200 stingers in his head, and another attack last year that his team characterized as more severe "and more dangerous because he had been sensitized to bee stings from his first encounter."

A few weeks ago, Foyt said, he was planning to move a tree on his Texas ranch with a bulldozer when a friend offered to do it instead and wound up being attacked by bees.

"I was in another tractor with a closed cab and saw them chasing him and he was slapping at them and going backward to get away," Foyt said. "And I thought, 'Man, I'm glad I'm not in that one.' He got stung pretty good, his face was swollen and he got a black eye. He was lucky they were honey bees, not killer bees, because he could get away from them. I felt sorry for him."

Foyt said at Daytona in February that he's ceded daily operations of A.J. Foyt Racing to his son, Larry, and only gets involved with the team when they ask him for money. The team fields cars for Tony Kanaan and Matheus Leist.